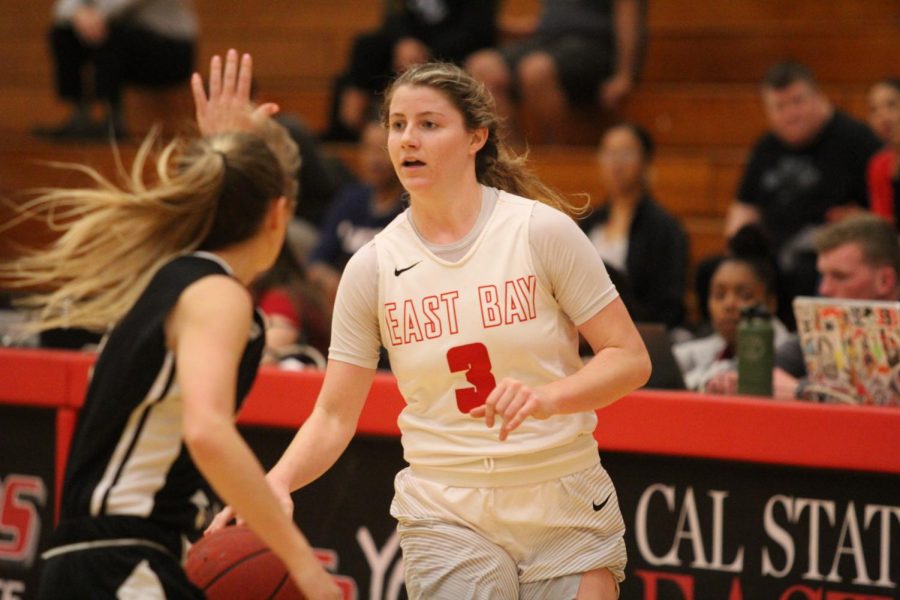 A look into what WBB player Delia Moore said about the past year and upcoming season
Women’s collegiate basketball returns this fall to California State University, East Bay’s campus. They missed out on a season last year due to Covid-19, and the women’s basketball team is ready to retake the court.
The 22 games regular season begins November 27. Having our players back to represent our school and compete gives fans of the game to get that scratch they’ve been itching for finally.
The last time the women’s basketball team was back on the court was in the 2019-2020 season, where they finished with a winning record of 18-12 in the regular season. Their season came to an end after a loss to California State University, San Marcos in the Colonial Athletic Association (CAA) tournament.
Junior guard and 2021 Charnofsky Award Recipient Delia Moore discussed how it was going through 2020 as a team. “I think our team did an exceptional job at staying together, staying connected, and persevering despite obstacles and uncertainty,” she said, “It speaks to the commitment of our team that so many of us opted into RTP to get better and be together, regardless of what the ‘season’ was going to look like.”
Now that school activities are on track again, the season’s first game will commence on Saturday, November 27, at CSUEB’s Pioneer gymnasium. New challenges await the players, which bring new opportunities. Moore commented on those early adjustments, “I believe it may be a bit challenging, at least at first, to manage time and balance sports. After a year of not traveling or having a season due to Covid, I think there will be a readjustment period. But I believe our team will be well prepared for those challenges.”
Their first two games coming back to a new basketball season are against California State University, Dominguez Hill, a team that finished their 2019-2020 season with a regular season record of 13-15, and California State University, Los Angeles finished their 2019-2020 regular season with a losing record of 12-16.
CSUEB’s women’s basketball team succeeded recently when they played against the first two opponents of the new season. They won the last two meetings against Los Angeles and captured a win at Dominguez Hills’ home field in a previous season.
While the first and second games were played at East Bay, three games against San Marcos will be played on their home court. This game has a revenge feeling to it, considering that San Marcos knocked out the team from the past women’s championship tournament.
“The team has been training for a couple of months, and it’s been good being back as a team,” head coach Shanele Stires stated in a “WIN THE WAIT” campaign video. Since the first week of March, the school campus has let student-athletes return to practice.
Having our women’s basketball team starting to get their bodies right is vital for the season.
“This summer, our team is focused on improving our shooting as well as getting stronger, healthier, and in shape. Our team is building a foundation of trust, respect, and accountability. Returning to campus will help us continue creating as a team and a program and have a great season,” Moore added.
Now that East Bay’s athletics are back again, it’s just another step towards a ‘new normal.’ “I’ve been missing the energy and competitiveness of the game, well as getting to spend time and win games with my teammates,” Moore concluded.
With the Pioneer women’s basketball team beginning to have offseason and preseason workouts again, the time for winning starts now. As a fanbase and a school, we must get behind our women’s team as they make their long-awaited return to the hardwood floor and support them as they become California Collegiate Athletic Association champions again.