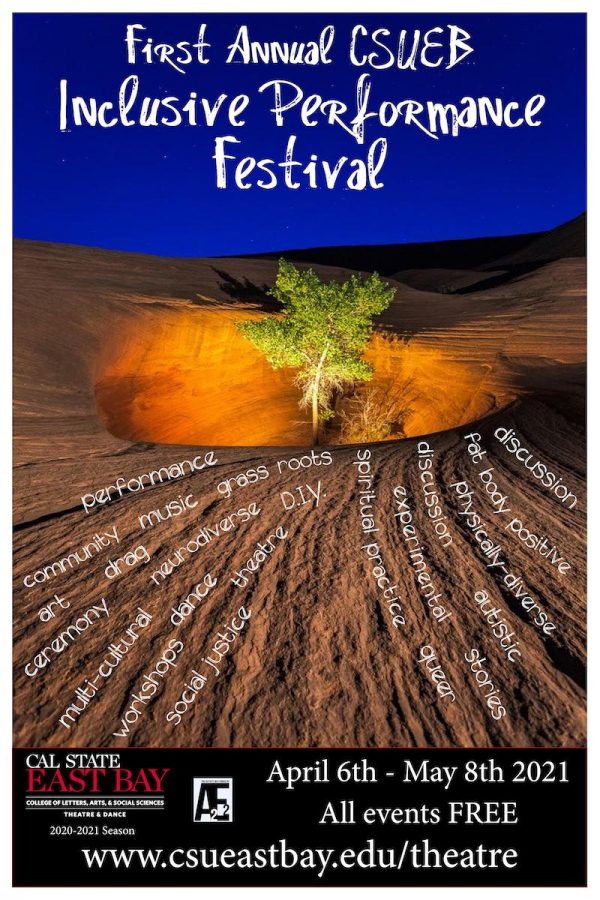 Over the course of a month, California State University, East Bay’s Department of Theatre and Dance in collaboration with Dandelion Dancetheater, conducted the university’s first Inclusive Performance Festival (IPF). Composed of both virtual and in-person workshops, musical ensembles, performances, and exhibits, the festival’s events accommodated a wide range of student interests.
The festival, directed by Theatre and Dance Department Chair, Eric Kupers along with an Inclusive Performance Festival (IPF) planning council, ran from April 6 to May 8 and hosted a total of 20 collaborative events.

In an interview with IPF’s director, Eric Kupers, he stressed the importance of perspective.

Kupers explained that the goal of the festival was to “Look at performance in new ways, both in light of wanting to work towards greater inclusion and diversity.” Both Kupers and the IPF planning council set out to create an environment where participants could revisit their interests in the world of performance and art.

In creating the Inclusive Performance Festival, a central value was to encourage participants to update their approach by stepping away from the generational perspective. Kupers discussed how he wanted individuals to view performance and arts in “Ways that are more relevant to the way the world is now, rather than rely on what artists, producers, and directors have done for many many generations.”

Participants were offered a number of stunning events such as:

– Drag: The Lecture, a workshop that explores the philosophy of drag performance.
– Introduction to Mohiniyattam, a guided workshop performing the ancient dance from Kerala, India.
– Indigenous Music Workshop with Ras K’Dee, an exploration of culturally-informed dance and musical practices.
– Spectrum Showcase, featuring work by Autistic and Neurodivergent students and community members.
– EARTH DAY: Including the Land & First Peoples with Corrina Gould, a workshop honoring the legacies of the indigenous people of the San Francisco Bay Area.

With a remarkable total of 20 events, Kupers credited the festival’s success to the individual hosts of each event. Kupers hoped to stray away from the traditional model that separated producers from artists and activists, and instead adopt a collaborative system.
The festival was designed in a way that gave groups the independence to produce, develop, and conduct their own event. “That to me is a really exciting model because it feels more sustainable going forward,” Kupers stated.
The event itself was an instant success that showcased diverse artistic and musical forms and allowed participants to cross genre boundaries that often surround the arts.
Reflecting on the festival, Kupers mentioned that for him the most meaningful part was the planning that led up to the event. “I’m interested in blurring that line between public events and private planning and it felt like the planning council meetings were themselves a huge part of the festival” he added.
In those weekly meetings, Kupers said “It was really exciting because we had some really interesting discussions about sort of why we do performance, what is it we hope to get out of it, and how do we relate to audiences.”
Reflecting on the festival, Kupers recalls a special moment shared between fellow presenters and himself. During one of the festival’s earlier events, Lest We Forget, he says five different artists and teachers were set to present, but no one else besides the presenters was in attendance. Kupers explained, “That was actually the really great thing about it, so we shared with each other and it was really beautiful.”
Although there were a few people watching the event virtually, the moment felt very intimate. “I loved it, it was sort of stripping away the capitalist model of producing art, [where] the art has value based on how many people come to see it, and instead saying no the art is valuable because we need this for our souls to share with each other and express.” He added, “it reminded me why I do art in general.”
The good news is, if you missed it, the Inclusive Performance Festival is set to return next year and the IPF planning council is hoping to make it an annual CSUEB event.