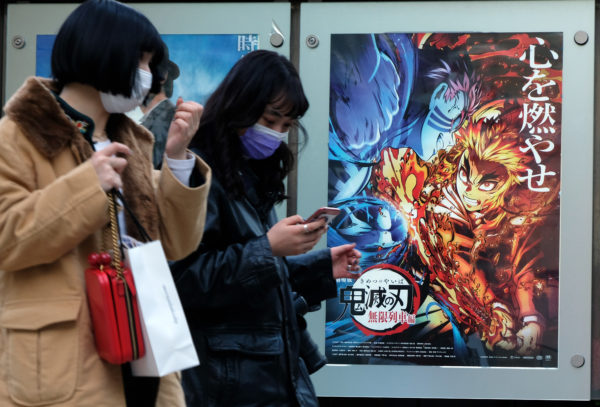 By Paolo Acob, PHOTO EDITOR
The closer the U.S. is to returning to a safer society, with Covid-19 testing becoming more accessible, 35.8 percent of Americans are vaccinated, and with the continuous maintenance of CDC safety guidelines, more American citizens are returning to their favorite pre-pandemic activities. Outdoor dining is slowly transitioning back to indoor dining, small gatherings are now socially acceptable if all parties are vaccinated, and movie theatres are opening up again.
With new films available on streaming services and theatrical releases, consumers have become accustomed to watching the latest movies in the comfort of their own homes.
That was until fans received Demon Slayer: Mugen Train, the film that continues the first season of the anime Kimetsu No Yaiba. The series follows Tanjiro Kamado, an orphaned boy on the journey to seek a cure for his sister, Nezuko Kamado, who was turned into a demon on the night their family was slain.
As this film was anticipated for two years, since the end of the first season in 2019, the film was not available in the U.S. until a year after its initial release in Japan. Considering that Mugen Train is not available for streaming, fans were eager to grab tickets for the film.
As films prior to Mugen Train were either underwhelming or simultaneously available on streaming or theatrical, the Demon Slayer movie is the first to release exclusively to theatres.
Mugen Train’s first day in theatres achieved $21.1 million in the box office, and in the most recent update of May 9, the film is currently at $37.2 million. Initially, the film’s release was a limited release, only available for a week, similar to how anime movies are traditionally released. Although due to the overwhelming support in the U.S., the studio decided to extend its release in America indefinitely.
Contrary to popular belief, movie theatres don’t make any revenue directly from the films they show. According to writer Dina Zipin, “A studio might make about 60% of a film’s ticket sales in the United States, and around 20% to 40% of that on overseas ticket sales.” With Mugen Train classified as an international film, movie theatres won’t get as much profit from the film, as most of that income will go to the animation studio overseas.
Movie theatres rely mostly on concessions, merchandise, and promotions coordinated with films as their primary source of income. Naturally, this would explain the hiked prices for nachos, popcorn, or even a water bottle.
How Mugen Train ultimately contributes to “saving” movie theatres would be something beyond promotions or box office success; it is the film’s timing.
For most fans, this is their first film returning to movie theatres, as the film is exclusively available in theatres and not accessible on streaming platforms at the moment. As fans are returning to movie theatres after being away for a prolonged amount of time, they are more likely to purchase concessions like nachos or popcorn, purely based on the nostalgia of the iconic snacks.
Mugen Train bringing fans back to movie houses allows theatres to generate revenue. It’s also an exceptional film with a lot of replay value, which has brought some back to watch the film for a second, or even a third, time.
Theatres nationwide were able to thrive off of the success of “Demon Slayer: Mugen Train.” As fans begin to feel more comfortable taking their theatre seats, hopefully, movie houses can reclaim their rightful spots in America’s pastime activities, retaining the same sense of pleasure that comes from watching a film.