Attack on the Capitol and the Aftermath 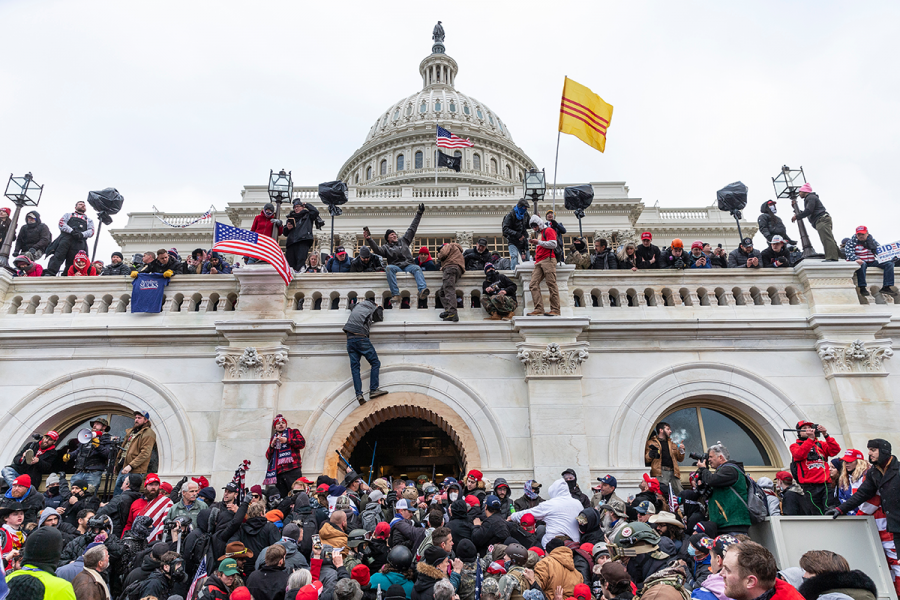 By Scarlet Schwenk,POLITICAL EDITOR
History was made on Jan. 6, when supporters of outgoing President Donald Trump attacked the United States Capitol through an attempted coup d’état. However, this was not the first attack on the nation’s capital, though it was the first attempt at overturning election results on American soil. The other attacks occurred in 1814, 1954, and 1988.
The Capitol Siege was organized through a social media site, Parler, notable for its platform catering to far right militia groups, such as the Proud Boys. While the Black Lives Matter Protesters were met with the National Guard, armed with rubber bullets, tear gas, and dressed in full riot gear, the Jan. 6 attack was met with an unprepared police force, who chose not to use lethal force.
The attack on the Capitol was fueled by a flurry of Trump’s tweets promising his supporters a “wild” day in Washington D.C. on Jan. 6 to “stop the steal.”
Prior to the insurrection, the “New York Police Department sent a packet of material… [indicating] that there would be” violence at the Capitol after the Presidency was certified, according to NPR.
Through a lack of assessing the situation, the Department of Homeland Security failed to adequately protect the Capitol. However, assessments were thoroughly investigated during the wake of the George Floyd protests occurring in every corner of the country from Oakland, CA to New York City, NY. The mainly peaceful protests were met with violence and hyper-militarism, as the National Guard shot into the crowd with rubber bullets.
The failure of security enabled the violence to begin before the Presidency was certified, forcing members of Congress to abandon all their classified documents on the Senate floor.
Before the attempted coup, Trump and other members of Congress spoke at a rally in front of the White House just moments before the crowd marched down to the Capitol building, encouraging his supporters to fight for their country.
With a lack of police presence, rioters were able to break through the Capitol’s barriers with ease, armed with molotov cocktails and battering rams. Two pipe bombs were identified in both Democratic and Republican national committees. The onslaught of violence continued for hours, forcing all members of congress to remain in lockdown, abandoning their duties of certifying the presidential election results.
Dozens of pictures later emerged of the insurrectionists taking photos of Representatives’ private documents. One man, Richard Barnett, stole mail from Speaker of the House Nancy Pelosi’s office, taking a photo with it outside the Capitol. He has since been charged with unlawfully entering a federal building while armed.
Violence persisted inside the halls as rioters caught on video are heard exclaiming “Hang Mike Pence” while carrying handcuff zip ties used by police in mass arrests. Along with pipe bombs and molotov cocktails, gallows were built just outside the Capitol, making their violent threats evidently real.
Not only were Representative’s lives at risk, journalists cowered in fear within the Capitol building and those outside had their camera equipment vandalized by the rioters as they were labeled “fake news.”
While those inside the Capitol hid, fearing for their lives, Trump, alongside his family, watched the insurrection take place via television from the safety of the White House. Hours passed before Trump sent the National Guard to clear the property from violent riots.
The aftermath of the Insurrection at the Capitol left four people dead, including one federal officer, and several other officers were left injured.
Since Jan. 6, the Federal Bureau of Investigation has launched an investigation into the riots, arresting 12 people involved. Trump’s Twitter has since been banned. The social media giant’s CEO, Jack Dorsey, explained the company in removing Trump has “[focused] all of [their] actions on public safety.”
The same week, a single article of the second impeachment, led by Representative Ilhan Omar posited that Trump incited the insurrection through the spread of tweets and rhetoric kindling violence.
A week later, Trump became the first president to be impeached twice, with a landslide vote of 232-197. 10 Republicans voted alongside their Democratic colleagues to impeach Trump, a historical vote putting aside tribalism in American politics for a brief moment.
If convicted, the Senate has power to ban Trump from holding public office in America. Minority Leader Mitch McConell continues to push Democratic Senators to delay impeachment trials until February to allow Trump’s team to prepare for trial. The South Carolina based defense attorney Butch Bowers, who previosuly served in the U.S Justice Department under Republican President George W. Bush is representing Trump.
The Senate agreed to a delay in the impeachment trial, allowing Biden some air to breathe through inheriting a nation in tribulation. The trial is now set to begin Feb. 9. In delaying the trial, Biden aims to push The Coronavirus Aid, Relief, and Economic Security (CARES) Act through the Senate, offering aid for Americans amidst the pandemic.
Through impeachment, the Senate seeks to send a message to the American people: violence will not overpower the Democratic Process America holds as its core value.