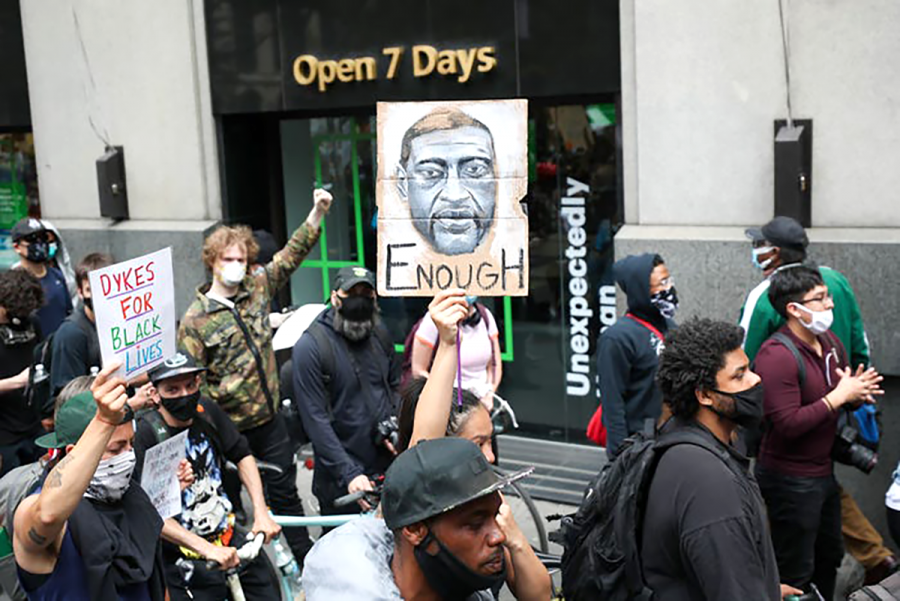 New Yorkers protest over the death of George Floyd on June 2, 2020.

By Kris Stewart, PIONEER ALUMNI
This story was previously published in the INSIDER
The onset of the coronavirus left a lot of freelance writers financially vulnerable, myself included.
Some of the editors I used to pitch to have been laid off. Other publications have switched to only using in-house reporters.
In the early weeks of the pandemic, I pitched all over and got nothing. But that’s the nature of the beast.
Then, as news spread about virus-related health disparities within the black community, editors started frantically looking for black reporters.
Their messages usually included a request for “unique perspectives, personal essays, or coverage from the ground.”
Now, with protests breaking out globally after the death of George Floyd, the same call is going out.
An editor from a publication I had been fruitlessly pitching to for months reached out to ask me to write an article on what families can do to help further racial justice.
I was so happy to have an assignment, I quickly accepted.
But after I started the piece, I began to think about why they tapped me. Some would say it’s obvious: I’m black and, therefore, I would know best.
Or maybe they felt I was qualified based on my previous work.
I struggled through the piece and felt conflicted the entire time. On the one hand, I needed the work because, truthfully, I needed the money. On the other hand, I don’t know if it was worth exhausting myself mentally and emotionally for a nominal fee.
Was I selling out? Was I being exploited?
Racism is not just a black story
In general, black people are tired of explaining. We’ve been doing it for years, to no avail.
A lot of white Americans still don’t fathom that saying “Black lives matter” is not saying other lives don’t. They don’t (or won’t) appreciate that being pro-black does not mean we’re anti everybody else.
And while they love quoting Martin Luther King Jr., they don’t fully understand his words.
Whenever another black person is killed by the police and their name starts trending on Twitter, the call goes out for black journalists to debrief the world on both the tragedy and the civil unrest that usually follows.
But, if we’re talking about a nationwide response to the systemic racism that perpetuates police brutality, why do you need a black person to tell that story?

I’ve watched white allies use their bodies as a barrier between the police and black protesters. In the same way, non-black writers should show solidarity by reporting on racial injustice.They shouldn’t be allowed to shy away from covering uncomfortable truths.And it’s white journalists’ duty to write articles and create content, not just on the black experience but on the white experience. They need to speak to their own community and call them to action in the same manner that black journalists do.
There are brilliant, talented, and purposeful black writers who use their voices daily to spread awareness. But racism is not just a black story. And white writers need to forfeit the privilege of sitting on the sidelines.
Black writers can cover more than just the black experience
Some editors think that by giving black writers the task of documenting what’s happening, they’re amplifying our voices. And to some extent that’s true.
But when you only call on us in times of social unrest, our usefulness to the industry becomes tied to the rise and fall of breaking news. And constantly contemplating the abuse and death of our people is emotionally taxing.
It adds to the very injustice we fight against daily.
“I’ve been so busy covering the unjustifiable deaths, murders, of black and brown people over the years that I had grown accustomed to ignoring the toll it had taken on me as a black journalist,” LZ Granderson wrote this weekend in the Los Angeles Times.
According to Pew Research Center analysis of data collected between 2012-2016, 77% of newsroom employees including reporters, editors, photographers, and videographers in newspapers, broadcasting, and online — are white.
That’s less diverse than the US workplace in general.In 2017, black people made up only 7% of the newsroom.
We’re used like grandma’s china, pulled out for special occasions, and then tucked away in a cabinet until the next police shooting.
Black writers can cover more than just the black experience. Editors should offer us work that doesn’t center around dissecting why we’re treated the way we are and what white people can do to help.
It can help prevent the burnout so many black writers experience, hustling for real estate within white-owned publications.
“The work must continue, but at a humane pace backed by institutional and industry support,” Patrice Peck wrote in a New York Times op-ed on Friday.
“Investment in black journalists is critical, not only through equitable compensation for our contributions, but also in addressing burnout, layoffs, and mental wellness, particularly among those of us who keep on keeping on.”
If you truly believe that black lives matter then you must also believe that black opportunities matter, too. Use your platform to invite black voices to share light, even frivolous content the same way you solicit us to report misery and turmoil.
As individuals, black journalists run the gamut. Our writing opportunities should include what we’re passionate about, not just what we’re burdened with.
Social justice is the goal for everyone, and it shouldn’t just be the responsibility of the marginalized.