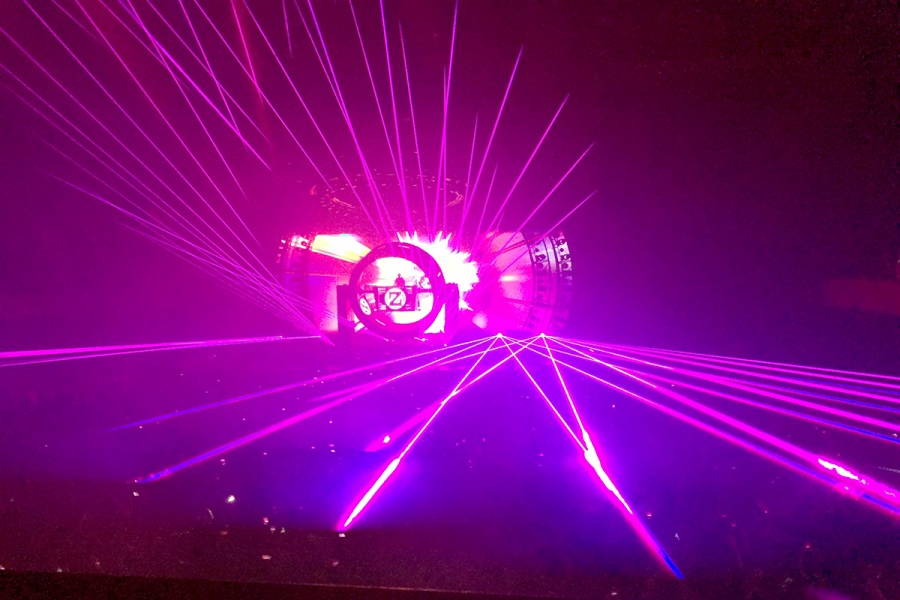 A touch of electro, a splash of house, and a sprinkle of good vibes. What sounds like a recipe from The Powerpuff Girls is the formula DJ Anton “Zedd” Zaslavski used to create an unforgettable night.
This tour comes at an interesting time in Zedd’s career. This past summer, Zedd and past collaborator Matthew Koma ended their friendship over the credit of Zedd’s hit song Clarity.
The drama started as a celebration post from Zedd regarding the seven year anniversary of Clarity being a Hot 100, the first of his career.
“SPECTRUM CAME OUT 7 YEARS AGO AND CHANGED MY LIFE FOREVER, ”Zedd wrote.
However, this post was greeted by statements from Koma stating that Zedd’s work wasn’t original and that he was a toxic person. While the statements themselves had some choice wording, the feud itself didn’t feel bitter. It felt like two friends who were calling it quits, and considering the song list that Zedd and Koma created, this split will affect the electronic dance music scene from here on out.
The show itself is a whole other story. Zedd brought his A-game when it came to the orbit tour. First things first, respect should be given where respect is due. His openers, NOTD and Jax Jones, pulled out all the stops to ensure that the crowd was warmed up for Zedd. While NOTD laid down the electro beats, Jax Jones filled the night air with house, proving that they really are masters of their craft.
As someone who was at the show from the start of NOTD’s set to the end of Zedd’s, there was a moment where I started to think “these openers are really good, why is Zedd the showstopper again?” But believe me when I say, Zedd made sure to remind me.
Zedd’s new setup for this tour is unlike anything else. Suspended in mid-air, and surrounded by a rotating stage, Zedd felt part of every display he put up. With screens on both the inside and outside of the rotating ring, the visuals weren’t interrupted by Zedd’s booth.
Speaking of visuals, lasers have always been a favorite of rave goers, but when it came to Zedd’s lasers, there was an interesting effect that happened if you were sitting on the second floor of the Bill Graham Civic Auditorium. When he flooded the venue with his lights, he created a neon sky for those enjoying the dance floor. For those on the second floor, it felt more intimate. The lights hid the massive crowd with a blanket of colors, so all you could see was Zedd himself and nothing else. It almost felt like a VIP show.
Earlier this year, Zedd announced he would be changing his iconic Beautiful Now opening. To my surprise, and to anyone else who hasn’t seen his new set yet, it wasn’t just the opening that he changed. Instead of having galaxy-themed images play in the background like his Spectrum tour, now his visuals were themed around the concept of a journey. For example, his popular remix to Rude by MAGIC! has always been accompanied by green and blue stars that pass by as you fly through space. For his new tour, while the green and blue hues are present, instead it features a jungle setting full of flora.
Each song was paired with a “journey” that fit the vibe of the song. Then for his finale, it all came together, each visual zooming past you at a lightning-fast pace. Each segment was brought together into one cohesive adventure.
The past few months for Zedd haven’t been easy. With the split with Matthew Koma, as well as constant criticism that his music has become stale, one would expect that Zedd would take a break from the live performing circuit. Any long-time Zedd fan would tell you that he lives for the stage. With every show, no matter how many times you see him live, he puts his heart into every performance. The future may not be clear for this particular Dj, but one thing is certain: if he can put up a show like this amidst all this drama, we are in for a wild ride.