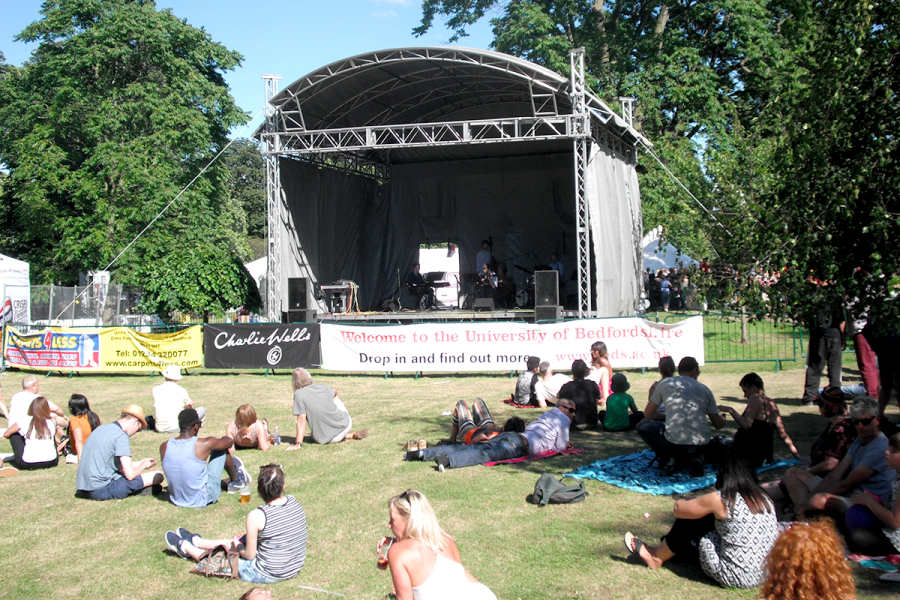 The City of Alameda’s annual “Island Jam” occurred June 15-16. For the festival, small businesses come from all over the Bay Area, bringing different cultures and trends with them. Local music artists also come to provide a rich culture of Bay Area music.
The musical lineup at the 2019 event consisted of a variety of musical styles. On June 15, the set consisted of: Third Soul (Latin R&B), Shebang Steel Drum Band, Black Pages (a Beach Boys tribute band), Kaleo + Akoni (Hawaiian R&B), and A License to Chill (a Jimmy Buffett tribute band).
On June 16, the set consisted of: Alameda Can Sing (a local vocalist group), Halau Makana Polynisian Dance Company, The Mirage Band, Josh Jones Latin Dub Stars, Hey Jude (a Beatles tribute band), Mike Ward. These performers come from all over the East Bay to play for the diverse event population.
An early performance on June 15 was David Bay, a guitarist, singer, and graduate of Alameda High School class of 1973. Old classmates Linda and Matt, long time Alameda residents and festival goers, sat and listened to his expressive rendition of “Like a Rolling Stone.”
“My dance group has been gracing the stage at the Alameda Island Jam festival for over five years now. We teach the dances of three Polynesian cultures at our studio; Hawaiian, Tahitian, and Maori. When we perform, we display dances and songs from all three of those places, and sometimes even offer people in the audience to join us,” Jade Lulilo, leader of the Polynisian Dance Company.
Lulilo, as a young adult dancer, aspires to travel to Tahiti to learn further of the dance roots which reside there and within her own culture. Besides the musical performance, there is much local culture to be found at the event. Also featured were arts and crafts, animal petting, rides including a Ferris wheel and a “giant fun slide,” as well as some arcade games and bounce houses.
“We came expecting a farmers market and got a carnival too. A lot for kids to do,” said Alameda residents Liz, Niel, and their daughter Cara who were first time Island Jam goers.
The food selection was international style, a wide variety ranging from Poke, to BBQ, to Teriyaki and finally Tacos from Locos Only Food Truck, a Tiki Bar was also a central feature of the beverage section. Also included in the beverage array is locally produced elixir from Alameda Point. Alameda Island Brewing supplied local beer, and Rock Wall Wine Company supplied the wine.
One of the more significant stands at the Jam Festival was the CBD information booth, symbolic of Alameda’s recent legalization of the CBD and THC related products.
Directly next to the cannabis booth sat another trending business, Scottsman Grooming, monitored by the personable Rodger Scott and his wife, Denise. His modern beard conditioner and care products utilize natural ingredients and essential oils for healthy hair and skin care.
Originating in Pleasanton, the business has traveled a wide radius, even reaching cities such as Seattle. Small businesses such as this are what build our thriving East Bay culture, and many of the little gems are represented at Island Jam.
“The Alameda Chamber’s mission is to promote local businesses and nonprofit organizations in the community, and events like the Neptune Beach Community Celebration provide many opportunities for all of us to work – and play – together,” according to the Alameda Island Jam event website.