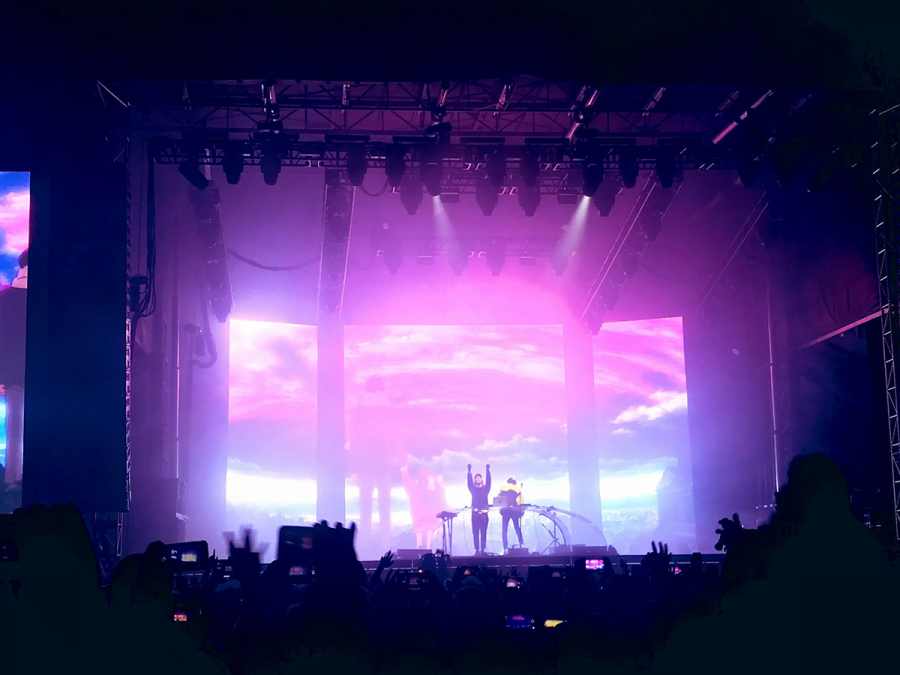 On Sunday, June 16, the Second Sky festival took place at Middle Harbor Shoreline Park in West Oakland where Porter Robinson and Madeon played the final song of the night.

PHOTOGRAPHS BY ROMAR LAMANO | THE PIONEER
While other music events boast that they are the first of their kind, Second Sky Festival actually lives up to that promise.
Second Sky Festival, created by American DJ Porter Weston Robinson, has been one of the most anticipated music events of the year.
Robinson has been a household name since the release of his album “Worlds,” which reached No. 1 on the Billboard’s Top Electronic Albums in 2014. Then, two years later, on Oct. 18, 2016, “Shelter” was released. A collaboration between Robinson, French DJ Hugo Pierre Leclercq better known by his stage name Madeon, and Japanese animation studio A-1 Pictures, “Shelter” rocketed toward popularity, with more than 44 million views on Youtube.
The Shelter Live Tour was something to behold. For many people, it was their first rave; but for seasoned ravers, it was a breath of fresh air in an otherwise overly saturated market.
The lineup stacked with names like San Holo, known for his “The Next Episode” remix, set the tone for the show. Robinson’s anime inspired graphics paired with Madeon’s smooth and mellow beats worked hand in hand to deliver an experience impossible to be recreated by any other pair.
The show ended with an acoustic version of “Shelter” accompanied by Madeon singing live. Eyes everywhere were wet from tears, strangers held each other in emotional embraces, and phones stopped recording, capturing the moment, not on video, but in their hearts. Even three years later, those who experienced it can remember the Shelter Tour like it was yesterday.
After the success of “Shelter,” Robinson decided to switch up his style from the melodic beats of “Worlds” to his Virtual Self Persona, a techno-based sound reminiscent of Dance Dance Revolution.
So where does Second Sky Festival fall on Porter Robinson’s list of successes?
Gathering fan art he’s received from social media, showcasing instagram worthy displays, and having popular food vendors from all around California serve the masses, Second Sky was brilliant.
When you first walked in, you get greeted by a breathtaking tunnel lined with vibrant purple and white flowers. Supplied with markers, festival goers could leave heartfelt messages or memes of their choice on provided walls. Festival organizers placed speakers all around the festival grounds, so even if you were in line for the bathroom you’d be able to hear the music as if you were at center stage.
If the Shelter Live Tour’s lineup was filled to the brim with talented artists, then Second Sky’s lineup was overflowing. Anamanaguchi, Kero Kero Bonito, Wednesday Campanella, Chrome Sparks, Cashmere Cat and Nina Las Vegas were all personal favorites of Porter Robinson. While G Jones was not able to perform on the second day of the festival, Robinson shocked everyone by having EDM pioneer Sonny John “Skrillex” Moore as the secret guest who filled up Jones’ set time.
But with all the great things that Second Sky had, that doesn’t mean it was perfect.
Second Sky was originally a one day event with a three-tier price for tickets as well as VIP. However, due to the flawed line system of Goldenvoice, the ticket service also used by Coachella, ticket scalpers were able to abuse a backdoor link bypassing the line system. Tickets sold out in minutes, leaving hopeful fans disappointed. While Robinson attempted to fix this by adding an emergency second day, performer G Jones would only be able to perform on the first day.
Security at Second Sky was a stark contrast to the vibes Robinson aimed to create. When certain attendees had issues accessing their ticket or they found out the ticket was invalid, security immediately pulled them out of line and drilled them with questions, going as far as interrogating them.
Bag check clerks heckled incoming festival goers and tried to trick them into throwing away items that were otherwise allowed at the festival. Staff in charge of directing traffic during the end of the festival treated the massive crowds like cattle.
Second Sky took place at Middle Harbor Shoreline Park, and while that allowed a full look at the San Francisco skyline, ocean winds caused dust to rise up and temperature to drop leaving patrons huddling for warmth.
Due to where the festival organizers placed the main stage, attendees in the middle of the crowd were unable to leave for food and water, unless they were willing to lose both their spot and the location of their friends.
Even with all these issues, Second Sky still succeeded in being a music festival worth attending. Every performance was memorable, even if they did not fit the expectations of the crowd. The final act of the night, which was Porter Robinson, was something both long time fans and newcomers could enjoy.
Before starting, Robinson himself described his set as a revamped version of the 2016 Shelter Live set. What followed suit was much more than Shelter with new fireworks. The hour long performance left those with memories of Shelter lost in the nostalgia and gave new fans a glimpse at what they missed out on.
As Robinson’s set ended, the crowd erupted with encore chants, pleading Robinson and Madeon to play Shelter for them one last time. Then from the blacked out stage, two spotlights turned on, pointing at a keyboard, laptop, and a microphone. Robinson and Madeon walked out, greeted the crowd with a wave, hugged each other, and with the “Shelter” logo shining behind them, the iconic tune of “Shelter” starts being played on the keyboard. The moment Madeon started singing the hook, the crowd immediately joined in, not missing a word.
Finally the beat drops and the stage lit up with brilliant shades of purple and pink, fireworks shot toward the sky like the Fourth of July, and scenes from the “Shelter” music video started flashing on the main screen. The crowd jumped to the song in unison, tears in their eyes, knowing they have become a part of history as the first run of Second Sky came to an end.