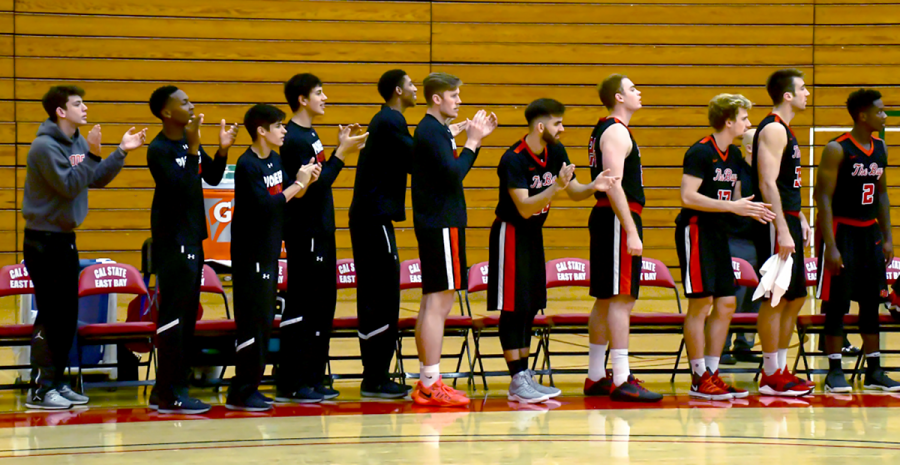 California State University, East Bay’s men’s basketball team heads into the 2018-2019 season with 11 new, and four senior players.
Last year, the Pioneers had an overall record of 10-18 and 6-16 in California Collegiate Athletic Association (CCAA) play during the 2017-2018 season. They had a tough stretch towards the end of the season: dropping 10 of their final 12 games.
The Pioneers have brought in 11 new players as a result of several players graduating and transferring after the 2018 season. Two of East Bay’s highest-scoring players, Druce Asah, who transferred to Metro State and led the team in scoring averaging 12.4 points per game and 2018 alumni forward, Drew Bender, who was the team’s second leading scorer, averaging 11.6 points per game in the 2017-2018 season.
Head Coach Bryan Rooney is in his second season and is optimistic about this season despite the loss of key players and the unappealing record of last year.
“I’m very excited about this group,” Rooney said. “We have 11 new faces, and we have seven very special individuals returning. I’m very excited about our senior leadership, Juwan Anderson, Deiondre Bird, Patrick Marr, and Evan Wardlow have been leading us in every single workout, and I’m very positive and hopeful that their leadership will pay big dividends.”
Senior point guard Juwan Anderson will be going into his third season with the Pioneers. Last year, he had a strong season; starting all 28 games and lead the team with 133 assists on the year, finishing the season second in CCAA with 4.8 assists per game. He also led the team in minutes per game and steals.
Senior forward, Deiondre Bird, will be entering his second season with the team. Last year he averaged 19.3 minutes per game and shot 53.3 percent from the field.
Senior forward Patrick Marr entered his senior season after redshirting last season and senior forward, Evan Wardlow, one of the 11 new players that East Bay has gained will be entering his senior year as well. He played his previous three seasons at Santa Clara University. Wardlow averaged 10 minutes for Santa Clara last year and is looking to provide leadership for the East Bay Team.
“It sounds basic and simplistic, but the first goal is to win the day, if we do that then we have a chance to be pretty good,” said Rooney. “After practice we talk about if we won that day or did we lose it. We’re five practices in and we’re 4-1 and excited to come back tomorrow and get another victory.”
Rooney wants the players to have a good balance between playing hard offensively and defensively to compete at a high level. He also spoke on how he wants everything to be done unselfishly and as a unit and not individually.
During the offseason, every player had been recruited, including the players that are returning.
During the recruiting process it was essential for Rooney to get to know the players at a personal level. He feels like he has the right connection with his players and the players have a mutual feeling.
“I’m looking to impact the team from an energy standpoint,” said junior guard, Miles Crawford in regard to the upcoming season. “Bringing immense energy all the time and giving my all on every possession on the offensive and defensive end of the floor. My expectations for this season are to win our conference and make it to the NCAA tournament”
Crawford transferred from Loyola Marymount University and is now one of 11 new players for the CSUEB team.
Before the start of the season, the main goal for the team is building strong daily habits. “For us, we want to tolerate perfection, if we do that then we are going to deserve some good results, but we have to earn it every single day,” said Coach Rooney.
The Pioneers host Halloween Hoops on Oct. 25 for students to be exposed to the 2018-2019 men’s and women’s basketball teams. The event will hold games, dance-offs, a dunk contest and more.
The Pioneers start their season with an exhibition game against UC Berkeley on Oct. 30.