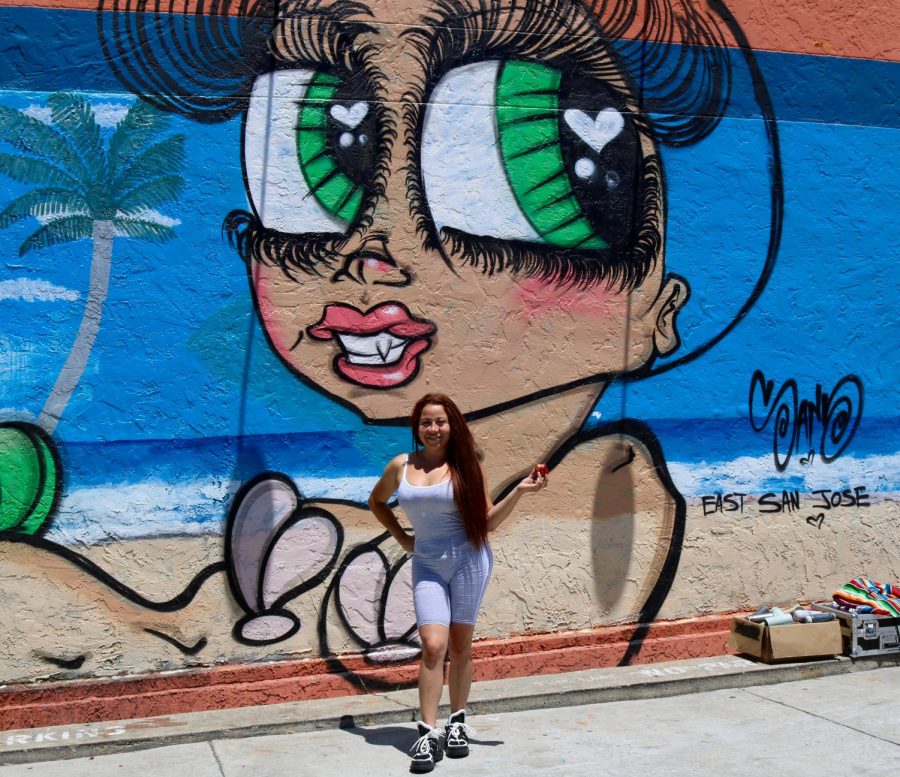 When you exit Alum Rock off of 101, you see a mural of a wide-eyed mermaid laying on a beach. Her dramatic lashes sit on top of hearts in her green eyes that match her mermaid tail. She is painted on the side of Mariscos Cancun, a Mexican seafood restaurant.

This mermaid is one of Sand One’s dolls, and she is an artist from East Los Angeles. She spent time last week scouting out walls to paint other dolls in the Bay Area. On her Instagram account, she updated her followers to where she would be painting next.

On June 21, Sand announced that she would be revisiting her San Jose mural, which she painted the night before at noon. She encouraged those in the area to come to meet her and to network with other people in the community. She also had pieces of her artwork available for purchase.

When she arrived there was a crowd of over 20 people waiting that came over to surround her. Sand said that many of the packages of artwork she sends are to Bay Area residents. People shared that they had walked from home, snuck out of work and taken long lunches to make the trip to meet her.

Javier Sandoval, owner of the building where Mariscos Cancun is located was not aware that so many people would be showing up to see Sand. He was only told by the man who rents from him that a famous artist was coming to paint a mural. When he went to go check who it was he found Sand standing on a ladder spray painting.

“She was just up there painting on the latter, on the top step. You know, taking a risk. And I said somebody famous doesn’t do stuff like that. She might fall off and get hurt, but she kept going and I starting helping her, giving her the cans,” Sandoval told The Pioneer. “She told me she didn’t want nobody to know that she was here because the whole place would be filled up with people. I thought she was just kidding me. And she finished and she left. Two hours later she came back and posted on Instagram she was here. The whole parking lot was packed and I was amazed. Now I can tell you that a lot of people follow her and she’s really nice.”

When Sand arrived she shared her experience with the Bay Area traffic. She had already traveled through Fresno, Pleasanton and San Francisco.

She explained that when she arrived in San Jose she did not know where she would be painting, but she knew she would find a spot and she did. Manifesting, hustling and being a go-getter are common messages that the artist shares on social media.

She then asked the men and women in the crowd what their dreams were. She encouraged them to speak about them as if they were already a reality. The owner of Enza Styles, a clothing boutique down the street brought an outfit for the artist. Sand told the crowd to go check it out and support the businesses within the community.

People waited in line for hours to buy stickers, lanyards, plates, wallets and other items that all featured Sand’s dolls. She referred to them as her children that she was giving up for adoption as people made their purchases.

Sand talked with her art collectors and took photos with them. They shared how they were inspired by her, how they or their loved ones loved her art, and they reminisced about previous encounters with her.

“I am the artist of the millennials, of the women of today, of the forgotten girls, of the mothers,” Sand told The Pioneer. “I am the artist of the strippers, the go-getters, the dreamers, the hustlers, the college girls, the young girls that have a dream that comes from the gutter and feel like there’s no way out. I’m like the Frida Khalo of the 21st century, of all my gangster chicks.”

The LA artist extended her visit to the Bay Area but you can follow her painting adventures on her Instagram page: @sandoner.