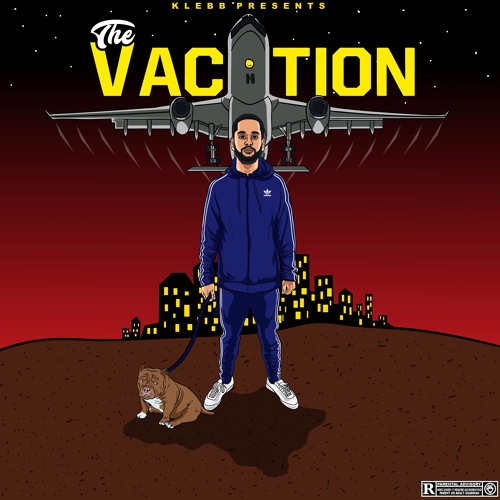 As a teenager, Klebber Machado was eager to jump into the spontaneous lunchtime freestyle rap circles at Ygnacio Valley High School in Concord. Later, Klebb took a History of Jazz and History of Rock & Roll class at Diablo Valley College in Pleasant Hill. Both experiences factored into his decision to pursue music as a rapper. Klebb, 22, was born in San Francisco, but grew up mostly in Concord.

“I didn’t learn to write bars until after high school,” Klebb told The Pioneer. “I always liked writing in class. I get bits from different stories I wrote and piece them together. I try to use those same words in different ways. History of Jazz opened my mind a lot, I didn’t know how much Jazz influenced music today.”

Machado, also known as Klebb, released his debut album “The Vacation” on April 20.

“The Vacation” is now available on iTunes, SoundCloud and Spotify. It contains 22 songs that express stories about growing up without a stable father figure, the death of a friend and the culture and day-to-day life in Concord. The album features artwork by Frank Guardado, a 22-year-old visual artist from Manteca.

Klebb prides himself on the sound quality of his music. Most of the album was produced and recorded in a studio in Oakland with his producer ProdbyVorhees, Gerardo Trinidad from South San Francisco and audio engineer Camilla Pinheiro, Klebb’s younger cousin who goes by “Flash.” The remaining parts of the album were produced in Concord, where Klebb has his own recording set up.

Klebb’s love for Concord and his friends is clear in his music. On several tracks, he proudly gives shoutouts to different neighborhoods and places in Concord. Klebb is Brazilian and relates to the Hispanic culture in Concord because Portuguese and Spanish are closely related languages.

And Concord has a significant Latino presence. In 2017-18, it was reported that Concord’s population is over 30 percent Hispanic or Latino which makes up over 37,000 of the city’s approximate 122,000 population, according to SuburbanStats.org. Many of his friends growing up were Hispanic. Klebb even raps a few bars in Spanish on the song “Interlude.”

“I love Concord in my music is because I always see rappers represent places they’re not from,” said Klebb. “Rappers think they can change their Instagram name and lie about where they’re from. Concord has supported me. I love the culture. That’s why I throw Spanish in my music. I love Hispanic culture: mostly Mexican culture.”

Klebb’s aim is to make real music that real people can relate to and tries to never lie in his songs. His major influences come from Lil Wayne, Drake, J.Cole, Eminem and Notorious B.I.G., but aren’t exclusive to just music artists. He said that his friends play a big role in his music.

“Everyone I know should be an entrepreneur or a millionaire,” said Klebb. “In the Bay Area, we think so differently from a lot of people. When you go other places you notice that. You respect the value of where you’re from.”

“The Vacation” couldn’t have been made without hard times in Klebb’s life. He uses some of his experiences so listeners can relate with his music. Close friends of his or people who were apart of his life may recognize some of the stories he tells.

In the song “Who Shines” Klebb talks about the passing of a mutual friend we have, Eric “Slick” Cruz, who was the victim of a fatal shooting in Concord in 2015.

“I had so much respect for that man,” said Klebb. “He was taken away for no reason. I mean it when I said in the song that ‘Concord took a defeat.’ I got hella lyrics about Slick. I made sure it wasn’t cheap shit anyone can think of. I made sure it was personal.”

Issues such as Klebb’s mother’s miscarriage and his father’s absence in the song “Backwood Thumbprint” were things he has never talked about before and just begun to open up about through his music. Klebb is proud that he’s been through so much and doesn’t want to hide anything.

In at least three songs, “Last Night,” “Backwood Thumbprint” and “Sippin’ and Smoking,”  Klebb mentions his upbringing without a stable father figure. His parents separated while he was young and although his father owned a home in the same town, he was very distant.

“After my mom divorced him, he fled the country so he didn’t have to pay child support,” Klebb said. “Months passed, I heard bragging about how he didn’t have to take care of us. Karma came. He got in an accident, now he’s not the same. I don’t feel the burden. I came up without him. It’s not hate, I just put it out there so others can relate. I know there are people out there that grew up without one or the other [mom or dad].”

Although the album has 22 songs, Klebb has more projects lined up. He finished the album last April but due to complications from it being his first music release he waited a year to debut his music. Klebb currently has hundreds of songs waiting to be finished.

“I wasn’t just going to give 10 songs,” Klebb said. “I hate it when rappers do that. Like 10 songs, that’s it? I like to listen to music like a movie. The 22 songs on the album are the first that I finished.”

Klebb’s upcoming projects include merchandise: sweaters and hats, music videos, live performances and singles. He is also currently working on “The Vacation 2,” and fans should expect better music and better production.

“If you think this is good, this is really only the start,” Klebb said.