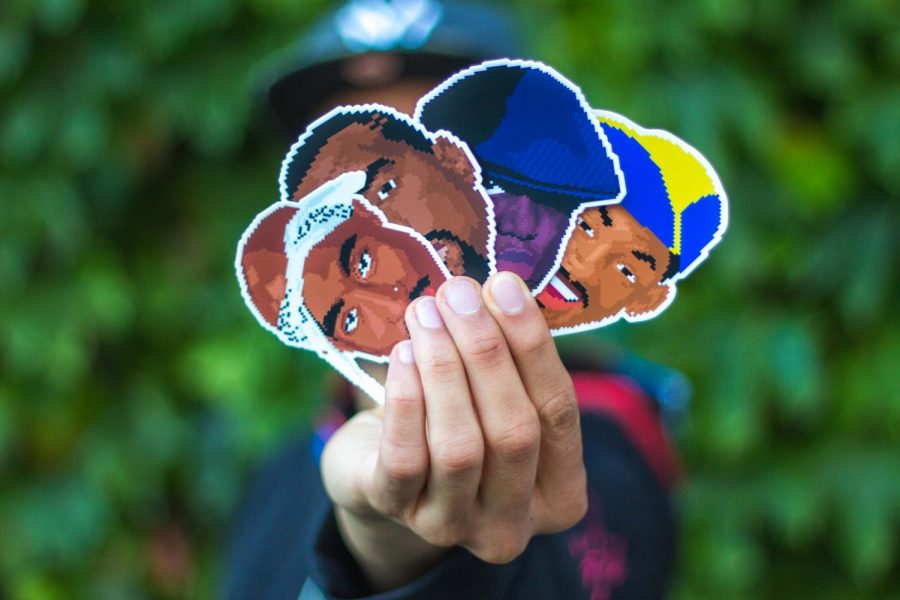 Chris Hurtt, a freelance illustrator from Oakland, is pushing to bridge the gap between retro art and music culture with 8BitBrand, a sticker, art print, and poster company.

What started off as a side project while he was a design communication student at San Francisco State, his hobby quickly turned into his business where Hurtt turns your favorite music artists and figures of pop culture into 8-bit characters, which you can then purchase in stickable or hangable form.

“8BitHipHop is simply Pixel Art meets Hip Hop Culture,” Hurtt stated. “8Bit refers to the retro video game graphics like the original Pokémon games that were pixel based and only allowed limited colors within each platform. I take inspiration from that although my graphics might be considered a bit more HD.”

Hurtt explained the creation of 8BitBrand started in 2015 from an infographic project when he was a student at San Francisco State University on a subject of his choice. He decided to do his project on the career of hip-hop artist Kanye West.

“I made various eight-bit designs of Kanye’s iconic outfits and shared them and more via Instagram,” Hurtt said. “I saw that people liked it, so I simply kept making them, it was really fun.”

Hurtt’s currently operates out of his home in Oakland and he explained that working out of the house allows him to ignore distractions. While illustrating, he loves to blast his music, which he said helps with the creative process.

“As things grow, I don’t doubt that I’ll have an office, maybe even [a] storefront to spread things out a bit more.”

Hurtt is also a part-time instructor and continues to do freelance graphic design for musicians and companies including Cardi B, BJ the Chicago Kid, Harper’s Bazaar Magazine and many others.

“At this point it’s something that I just do for the love and enjoyment of the fan base,” Hurtt stated. “I’ve heard countless stories of people putting the stickers on their computers, phones, or having prints in their office and strangers starting conversations off of it. I think that’s so amazing and I want more people to get to experience that feeling of mutual enjoyment.”

But it wasn’t an easy start. Hurtt explained that the hardest part of establishing his business was realizing that he would put more money into it than he would get back in the beginning.

As his business continues to expand, Hurtt stated that he sells on average anywhere from 25-50 stickers on a release date. All of his products are designed by Hurtt and he uses a third party manufacturer for production.

He currently has one wholesale client in the Bay Area, which is Faze Apparel in the Mission District in San Francisco.

“I’m open to having the items in more stores, it’s just not something I’ve actively sought out because I’m only one person running the whole show,” Hurtt said. “I’d love to start getting into pins, collectible toys and more animations for music artists, as well as athletes. I already do that now with some of my prints having them be small runs of 25.”