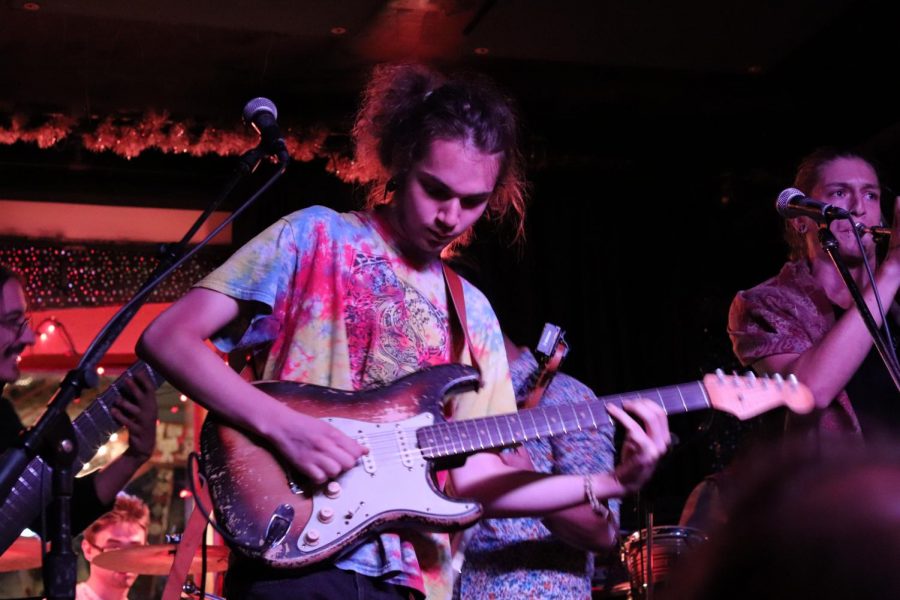 This Tuesday, at Bottom of the Hill in the Potrero Hill district of San Francisco, two East Bay bands, Skank Bank and Day Labor, opened up for touring band Los Kung Fu Monkeys from Tijuana, Mexico.

The bands arrived early to unload their gear, set up their merchandise booths and do a soundcheck that could be heard two blocks down on 17th Street. The doors opened at 8 p.m., people huddled around the bar for an hour waiting for the show to begin at 9.

Although 9 p.m. would seem to be a fairly late start for a show on a weeknight, the bands managed to draw a crowd of roughly 40 people.

The venue was poorly lit with bright-red Christmas lights that gave it a dive bar vibe, the classical Jamaican tunes in the background also gave it a sense of comfort.

Nine-piece band, Day Labor, from Pittsburg kicked off the show with their high-energy, ska/punk, horn-filled music. “It is our second time playing this venue,” said Day Labor’s frontman Terrance Williams. “It is rare to play on a stage where we all fit.”

Luckily, the stage was also big enough for Skank Bank, a nine-piece psychedelic-reggae band from Berkeley. Skank Bank has performed for almost six years, played roughly 200 shows, gone through a lineup change of almost 50 musicians and has contributed to the niche reggae scene in the Bay Area.

“I just got really into reggae because I inherited a ton of tapes from my uncle who spend a lot of time in Jamaica,” said Skank Bank’s frontman Gabriel Winter. “We wanted to slow down a bit to leave more space for improvisation.”

At 11 p.m. the headliners, Los Kung Fu Monkeys, hit the stage. It was the second time in 13 years that they played at Bottom of the Hill since their first U.S. tour.

Los Kung Fu Monkeys formed in 1997 and have not taken a break since. They are currently touring the country with The Offspring, Pennywise, The Vandals and Me First and the Gimme Gimmes on the Sabroso Taco & Music Festival tour.

“We love being in a band,” said LKFM’s frontman Bernardo “Bernie” Leos. “The band is like a family, but you to know that you can live in a room with them for several months. And by room, I mean a van.”

LKFM kicked off their tour on April 25 and will return to the Bay Area on May 16 in San Jose at The Ritz.