Warriors face Pelicans in second round of playoffs 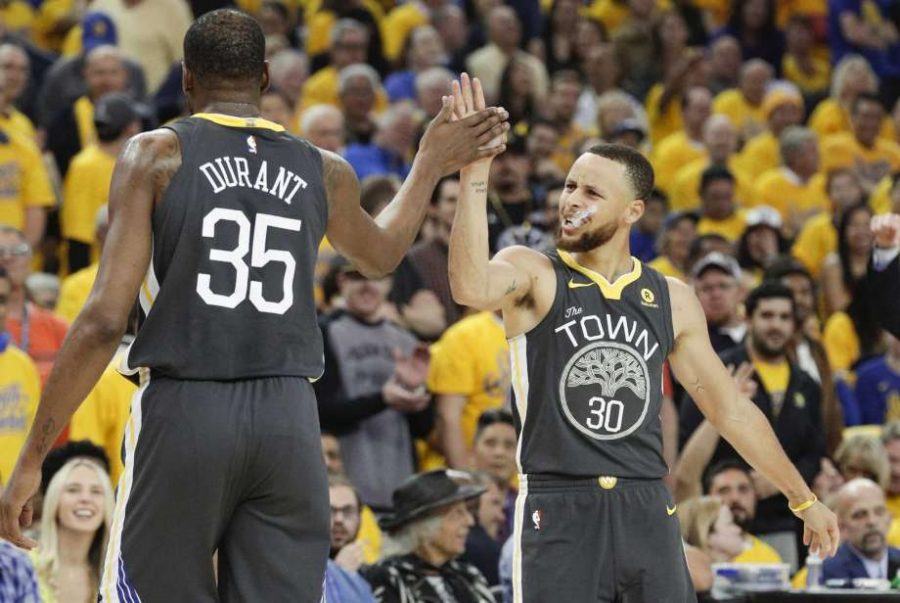 The first round of the NBA playoffs has concluded, and all the lesser teams in both conferences have been eliminated. Now the semifinals have started, as the Golden State Warriors take on the New Orleans Pelicans.

Golden State is coming off of a hard-fought first round series over the feisty San Antonio Spurs. They defeated the Spurs 4-1 in the series and will move onto the second round once again. They face the sixth seed New Orleans Pelicans that made a surprising sweep over the third seed Portland Trail Blazers.

Stephen Curry is set to return in Game 2 of the series on Tuesday. However, this will still be the Warriors toughest second round opponent in the Steve Kerr era in terms of opposing talent. Even with Curry’s return to the court, this series will still pose a challenge.

The Warriors showed that they can flip the switch defensively in the playoffs in the opening round. They were coasting through the regular season and their defensive rating slipped. The Dubs realized the urgency to win a playoff series without Curry and ramped up their defensive intensity. They suffered only one slippage in Game 4, but they have displayed their championship level defense once again.

Kevin Durant, Klay Thompson, and Draymond Green have all carried their share for the team so far. They have proven they can turn up the effort when called upon. With Curry’s return looming, Durant, Thompson, and Green do not have to carry as much of the load.

Andre Iguodala should return to his usual bench role when Curry eases back into the starting lineup. The Warriors core bench of Iguodala, Shaun Livingston, David West, and Quinn Cook will give them an edge over the Pelicans.

The New Orleans Pelicans have come into the second round sweeping the Blazers in a very convincing manner. The Blazers had no answers for Pelicans forward Anthony Davis. Pelicans guards Jrue Holiday and Rajon Rondo were also spectacular in that series, stymieing the Blazers backcourt of Damian Lillard and CJ McCollum.

The Pelicans lost All-Star center DeMarcus Cousins for the season after he suffered a torn achilles tendon in the middle of the regular season. In response to this injury, New Orleans traded for sharpshooter Nikola Mirotic from the Chicago Bulls to strengthen their frontcourt and shooting.

Without Cousins, Davis and Rondo have been the focal point of their offense for the second half of their season. Holiday has continued to shine as a fine two-way player in the NBA. Mirotic has been shooting the lights out from three-point range in the playoffs.

This the second time these two teams have met in the postseason. The previous instance was in the first round of the 2015 Playoffs where the Warriors swept the Pelicans 4-0. Current Pelicans head coach Alvin Gentry was a former assistant coach for the Dubs in 2015 when they won the championship that year.

Many changes have happened to both teams since then. Durant is now on the Warriors and the Pelicans’ newest additions of Mirotic and Rondo pose different matchups. Former Warrior guard Ian Clark is now a member of the Pelicans.

Davis is playing at an MVP-caliber level for the team ever since Cousins went down. He will be a nightmare for the Warriors to handle with. Davis will see multiple defenders such as Kevon Looney, Green, Durant, and possibly Javale McGee in the series in an attempt to slow him down.

The problem with the Pelicans is their lack of depth. While their starting lineup of Davis, Mirotic, Holiday, Rondo, and E’Twaun Moore is formidable, they have to rely on their starters for most of the game. The only bench players they play thus far are Clark, Darius Miller, and Solomon Hill. Pelicans only use an 8-man rotation and that can prove costly against the Warriors’ depth.

The Pelicans should quickly realize that they are not dealing with the Blazers anymore. Curry and Thompson are much more lethal and dangerous. They have no defender capable of guarding Durant. Green is also playing at his highest level so far so both ends of the court.

Since Curry should quickly return to form soon, the Pelicans’ chances of pulling off an upset are slim. Due to the sheer talent of Davis and the exceptional coaching job of Gentry, New Orleans will still bring a competitive fight to the Dubs. However, this series shouldn’t take too long and will be over in five games.