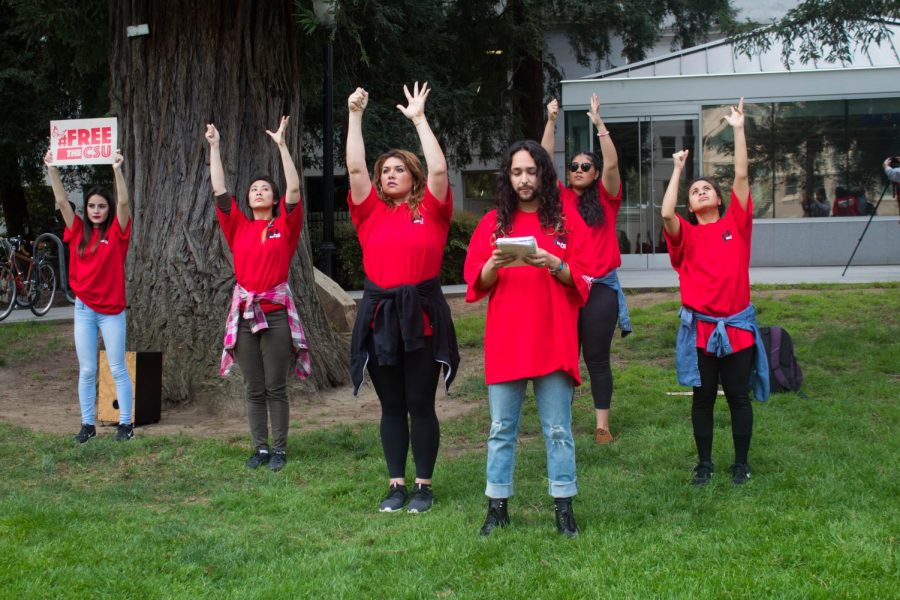 “Free the CSU” was a popular chant on April 4 in Sacramento at the State Capitol building.

With a potential Cal State University tuition hike looming, the CSU Student for Quality Education organization and the California Faculty Association organized a demonstration to voice their discontent with the lack of action and funding by the CSU Board of Trustees and Governor Jerry Brown.

On April 4, students and faculty protestors from at least 21 of the 23 CSU campuses gathered at the State Capitol to voice their concerns about the negative effects that a tuition increase would create.

Outside the Capitol, the organizers passed out free T-shirts with the hashtag #freethecsu and tables to create signs and colorful portrait posters of historical activists.

The protesters demanded California Governor Jerry Brown invest in the CSU education system and the CSU Board of Trustees should use their power to pressure Brown into doing so.

The board of trustees requested an increase of $263 million in the state budget for the 2018-19 school year, yet Brown proposed an increase of only $92.1 million which left a gap of $170.1 million. The budget plan revision will occur in May and the enacted budget will be determined during the summer while a more specific date has not been disclosed at the time of publication.

One of the speakers, Jorge Quintana, an English and ethnic studies major from Sacramento State University, expressed the financial impact the increase would create for him. “It’s difficult when we see tuition going up tremendously, 243 percent in ten years, tuition in 2011 was like $2,500, now we’re getting closer to seven grand and we’re getting the same education, we’re not getting more professors, there’s not as many full-time faculty,” Quintana told The Pioneer.

According to the CSU Board of Trustees, their proposed budget to the state is needed for compensation, the improvement of facilities, to create a higher enrollment rate and to help students graduate on time. Several students and faculty in attendance said they hadn’t seen any of these improvements on their respective CSU campuses.

“They don’t recognize our identities as students, as people of color, as queer folks, those who are in power don’t give concern to student issues and I think it’s important for us to be here and express our issues to them, so they can hear our voices,” explained Richard Avalos to The Pioneer. Avalos, a student from CSU Fullerton, made a nine-hour drive to show Brown how important educational funding is to him.

“My support for the students comes from a personal place as well, because I went to school and got my degrees later,” expressed CFA field representative Jessica Lawless. “The majority of faculty now are semester to semester, they don’t get health care benefits, there’s a lot of issues.”

According to research done by the CFA, about 60 percent of faculty are hired for temporary or part-time positions.

“I, myself have a lot of debt and couldn’t continue to teach and so now I’m in the labor movement to help make those changes,” Lawless told The Pioneer. “So I’m very much here to support the students not just because it’s my job, but because I know the effects, being a generation older, of what the consequences are.”

CSU East Bay professor Dr. Nichols L. Baham III and Jennifer Eagan, CFA president, also voiced their concerns on how a tuition increase would have a negative impact on the CSU system.

In addition to the rally, there were other demonstrations that depicted the struggle of student debt. “The Mountain of Debt”, an immense grey mountain of rocks made out of cardboard is where students wrote the amount of educational debt they were in, which varied from $5,000 to $339,000.

“How can we communicate debt and how it impacts the students?” Estefania Bautista, SQE member from San Jose State and creator of the art piece explained to The Pioneer. “And so we thought a mountain of debt, this could be an interactive way for students to write how debt impacts them.”

CSU Chancellor Timothy P. White was welcomed to the podium, but his speech was somewhat drowned out by chanting protesters. Along with White, CSU trustee Lateefah Simon, board of trustee chair Rebecca Eisen and other state officials came out to hear the students.

“Something different happened this year that never happened before, they would always vote in March and it didn’t matter what we did, Quintana told The Pioneer. “This year is different, this year we have momentum, we have our chancellor’s here, the president of Sac State came out, administrators came out, it’s different.”

Students seemed encouraged by the presence of faculty and administrators but they will have to wait a month until the revised budget will reveal if Brown gives more funding to the CSU system.