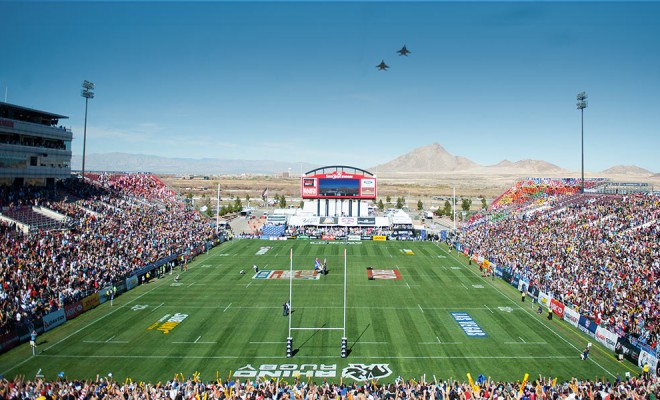 For the past three years, the USA Men’s Rugby team never made it past the semifinal round in the USA Sevens Rugby tournament in Las Vegas. That all changed on March 4, when the team shutout Argentina 28-0 to win their second CUP Final.

Led by team captain Ben Pinkleman, the team entered Sunday’s CUP Final unbeaten after they defeated Fiji in the semifinal game, but had to face Argentina, who also came into the final with a perfect record after winning a close match against South Africa.

The Eagles began their route of Argentina with Perry Baker getting USA on the board with a try, just three minutes into the game. Danny Barrett added to the scoring with 5 points to the board just before halftime. Kicker Folau Niua followed it up with two successful conversions that gave team USA a 14-0 lead heading into the second half.

Barrett followed his first half try by scoring his second try and the team’s third on a break away run, 43 seconds into the second half. In the last 25 seconds of the game, Carlin Isles secured the Eagles gold medal by scoring the fourth try of the game, which put the team up 26-0. A successful conversion kick by Niua added 2 more points to bring the final score to 28-0.

During the USA Sevens in Silicon Valley, Head Coach Mike Friday emphasized that the team needed to focus more on one-on-one tackles and be more aggressive defensively.

According to HSBC Sevens World Rugby, Friday said this would make American sports fans realize that they have another national team to support and be proud of.

While both teams have qualified for the 2018 Rugby World Cup Sevens in San Francisco from July 20 to the 22 at AT&T park, every tournament provides the perfect chance to improve.