Softball loses to the Toros in the rain 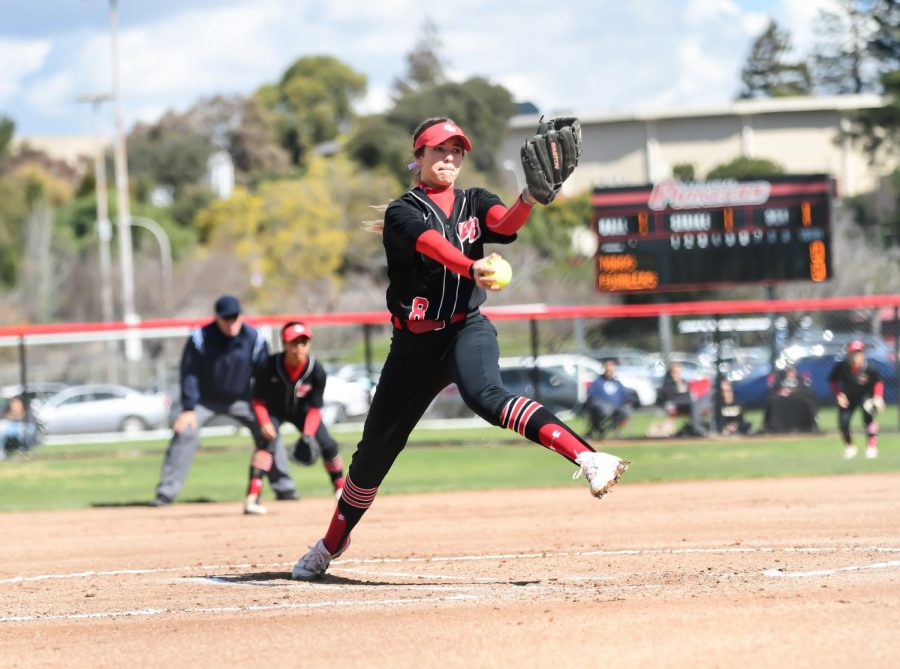 The Pioneer softball team faced off against the California State University, Dominguez Hills Toros in a four-game series during a rainy weekend at Pioneer Field.

The team went 1-for-4 in the series, as they had trouble scoring.

In the first game on Saturday, they fell 4-0 on the wet fields and had to endure a two-hour rain delay as well. It’s safe to say their rhythm was interrupted due to the unfortunate weather circumstances.

Dominguez Hills came out strong in the first game as they got on the board first and scored three runs.

The weather finally cleared up and the Toros scored a final run in the top of the seventh inning to give them the 4-0 first game win.

Sophomore pitcher Abby Greer was strong on the mound, despite her tough first inning. She struck out seven batters and only allowed three hits, the only earned run she gave up was the final inning.

The second game of the four-game series was postponed due to darkness cause by the rain delays. Because of this the two teams were forced to play three games on Sunday.

The Toros managed to get another win as they scored four runs in the fourth inning and closed the game out with two runs in the seventh inning to grab a 6-3 win over the Pioneers.

In the third game, the Pioneers came out strong again and were able to get a win and a shutout. Greer had another good game on the mound allowing just three base runners through six innings with no runs allowed.

The game was scoreless until the bottom of the fifth inning when the Pioneers managed to put two runs on the board after sophomore infielder Jennifer Palmares doubled down the right field line.

East Bay kept up the momentum and exploded in the bottom of the sixth inning, scoring a total of six runs in the inning and securing the 8-0 win.

In the final game of the series, the Pioneer bats weren’t as efficient as they were in the previous game, as they only put two runs on the board in the bottom of the sixth inning when sophomore infielder Sarah Fukushima hit a home run to left field. The Toros dominated and beat East Bay 8-2 to secure the 3-1 series win.

They will face UC San Diego, in San Diego (15-4 overall, 8-4 CCAA) starting on tomorrow in a four game series.