Warriors’ biggest threat is not who you think 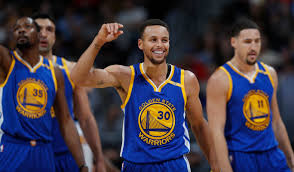 Their own worst enemy is themselves
The Golden State Warriors are once again the favorite to win the NBA championship. They are a -175 betting favorites, bet $175 to win $100, to win it all, according to OddsShark. They have an overall net rating of 9.7 which leads the NBA. They also possess the best record in the league at 43-13.

So, out of all the other 29 teams, who is the biggest threat to the Warriors’ title quest this year?

There are many contenders that have a chance against the Warriors such as the Houston Rockets, the Oklahoma City Thunder and the Boston Celtics. They are among the toughest competition the Dubs face. Each team has already beaten Golden State at least once this season.

However, despite the teams that threaten to dethrone them, the Warriors’ biggest opponent is actually themselves. They are their own worst enemy; no one knows the team better than themselves.

Each team mentioned above can give the Warriors a serious challenge in the regular season and in the playoffs. They each bring their own unique styles of play to show that they can indeed compete with the champs.

The Rockets won the season series against the Warriors two to one. They showed they can match up well with the Dubs’ “death lineup.” Not only can Houston relentlessly bomb three pointers to keep pace with the Warriors, but they also possess a surprisingly great defense.

Out of all the top contenders, Houston has the best shot at knocking off the defending champs. They have the second best record in the NBA. They are only one game back of the Warriors for the number one seed in the Western Conference.

The Oklahoma City Thunder’s dynamic trio of Paul George, Russell Westbrook and Carmelo Anthony can pose a challenge offensively. Each star player can score the ball with ease at anytime. However, with their best perimeter defender Andre Roberson out for the season the Thunder’s defense suffers against the Warriors’ high octane offense.

The Boston Celtics gave the Dubs two highly competitive games this season. Each game came down to the wire, and the two teams split the season series. The Celtics possesses the NBA’s best defense, but they have difficulty scoring the basketball at times.

Yet the Warriors’ biggest threat remains to be themselves. Their poor play can lead to their downfall if it persists through the final stretch of the season leading to the postseason.

During these past few weeks, the Warriors defense has not lived up to its championship standards. In fact, since Christmas, their defense is ranked 24th in the league, according to NBA.com. Even more disturbing, their three point defense ranks 29th during that time frame.

This is evidenced by the recent Warriors vs Jazz game. The Warriors got blown out of the gym as Utah scored a whopping 129 points. The Jazz only average 102.8 points per game, according to ESPN. They are ranked 25th in offensive efficiency. The Warriors surrendered countless points in the paint; the Jazz continuously drove to the basket with little resistance.

“We are limping to the finish line      to the All-Star Break,” Warriors coach Steve Kerr said on Feb. 2, right after the Warriors vs Kings game. “It’s obvious the guys are mentally fried right now.”

Furthermore, key players are racking up too many technical fouls. Draymond Green has a league leading 14 while teammate Kevin Durant has 11. If a player reaches 16 total technical fouls, then he will be suspended one game. Every other technical foul after this penalty results in additional one game suspension.

The Warriors already have nine players ejected from games this season with 25 games left to play. They lead the league in total ejections. Durant has four ejections by himself. Most of them were from arguments with the referees.

Maintaining composure is critical for any championship team. Barking and scolding the referees for missed calls are not aiding their cause. All the constant complaining is just going to make their play worse. They cannot afford to have their best players ejected or suspended for crucial games. This villainous persona cannot be what defines the team’s character.

We’ve already seen what happens when they get involved in controversy. In the 2016 NBA Finals, Draymond Green was suspended for a crucial Game 5 by accumulating too many flagrant fouls throughout their postseason run.

Without their emotional leader, the Warriors lost that game and eventually the series. Many Warriors fans argue, that if Green were available for that game, they would have won the championship that year.

The Warriors are still the favorite to win. But they also cannot show any vulnerability to their opponents. If they want to claim another title, they need to clean up these mental lapses soon before a team manages to do the unthinkable: eliminate the Warriors.