Diane Guerrero visits CSUEB and talks about her new book 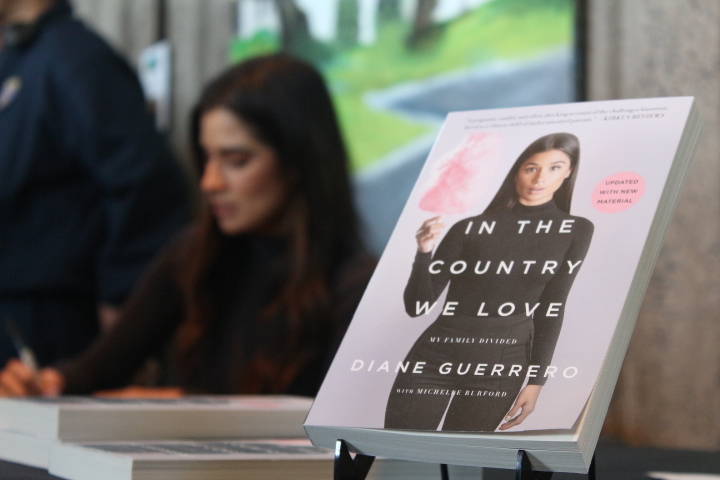 Actress and immigrant rights advocate Diane Guerrero visited CSU East Bay last Thursday to talk about her memoir, “In the Country We Love: My Family Divided.”

Aside from playing Maritza, the young, sassy in-mate in the hit Netflix original series “Orange is the New Black,” Guerrero is also well known for her recurring role as Lina on “Jane the Virgin.” But above all the stardom, Guerrero uses her platform to speak out about the broken immigration system, especially since it impacted her at a very young age.

When she was only 14 years old, Guerrero came home to an empty household after her parents and older brother were deported back to Colombia. Since then, Guerrero has been separated from her family because she is the only US-born citizen in her family. Guerrero discusses this memory in her book, and how it made her pursuit for a career in the arts even more difficult without a family to lean on.

Although the main topic of her book was her experience with immigration, Guerrero also spoke about her college years and her journey towards pursuing a career in acting, while still being involved in social justice movements.

“I majored in political science and communication because I was always very passionate about social justice and I wanted to help in my community,” Guerrero told the audience at her Q&A event held at the University Theatre.

Guerrero said that she initially felt discouraged to be an advocate for immigrant rights because she wasn’t an “intellectual or an academic,” but soon came to realize that real, lived experiences are more powerful because they speak the truth.

“I deserve the chance to say something on this,” Guerrero said. The audience clapped in agreement.

Aside from publishing her book, Guerrero was also nominated by then-president Barack Obama as a White House Ambassador for Citizenship and Naturalization in 2015. Guerrero volunteers with several immigrant organizations, including the Immigrant Legal Resource Center.

Audience members had the chance to go up to the podium and directly ask Guerrero questions related to her book. A few students got emotional as they expressed how much they related to some of the situations Guerrero went through.

Matina Jaimah, third-year student in CSUEB, was one of the attendees at Guerrero’s Q&A. “I thought [the event] was very educational and personally I’m really glad that she kept bringing up information about mental health,” Jaimah commented.

Guerrero revealed that she went through depression, anxiety and substance abuse. However, being involved in the arts was a way for Guerrero to cope with her mental health issues. “I started taking acting classes and that was one way for me to express my feelings,” Guerrero said.

Rocio Camarena, executive assistant and administrative support coordinator for the Office of Diversity, was the main coordinator for the event. According to Camarena, Guerrero’s book was chosen for CSUEB’s freshman common read, which invites the author to speak at the annual Week of Inclusive Excellence held yearly in January. Guerrero’s visit was rescheduled to Feb. 22 due to her taping schedule for her new role in the CBS series, “Superior Donuts.”

The Office of Diversity worked in collaboration with Associated Students Inc. to fund her visit, which was comprised of a lineup of events: two Q&A presentations for her book, a community meeting and a private meeting with Pioneer Dreamers.