Phone lock pouches comes to a live event near you 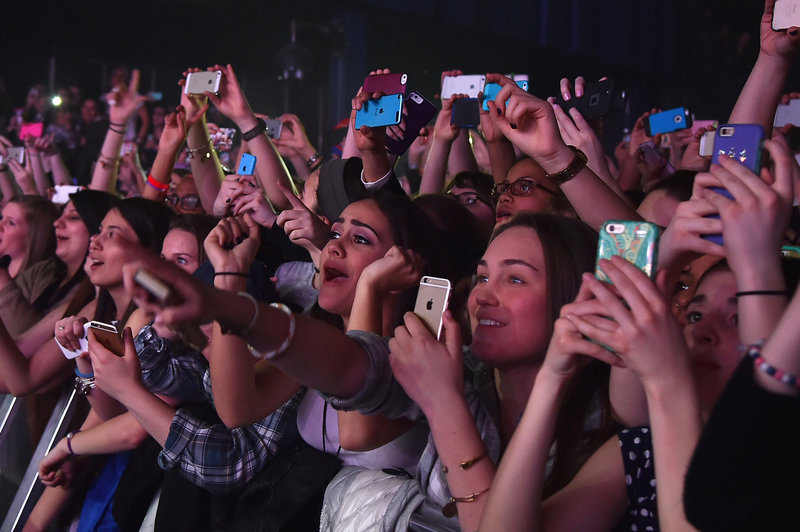 Concertgoers use their cellphones during a Fifth Harmony concert March 23, 2015, in New York. The company Yondr created a locking pouch to hold phones during performances, creating a "phone-free zone."

Phone addiction is a growing at an alarming rate. If you’re like me, you may have been able to control yourself and disconnect. For others, disconnecting or even putting your phone down may not be as easy.

With the vastly growing world of technology and social media, millions of people around the world are constantly distracted by their electronic devices and not living in the moment. While electronics and the media are taking over the world, many event goers aren’t getting the best experience due to constant distractions brought to them by their mobile device.

Entertainers are also facing distractions while they’re performing live. Performers have noticed that their audience constantly distracted by texting, tweeting, video-recording and even playing games during the show.

Many entertainers are frustrated and have decided to turn to phone lock cases to solve the ongoing problem.

Turning to phone lock cases is a great idea because no one is ever fully living in the moment. Personally, I absolutely hate when you go out with a group of friends and everyone has their head buried into their tiny screen. I tend to wonder what the point of going out even was if no one is interacting with each other. According to CNBC, a survey conducted by photo sharing app Flashgap found in a survey of 3,000 millennials that 87 percent admitted to missing out on a conversation because they were distracted by their phones.

According to Common Sense Media, “50 percent of teenagers say they are addicted to their phones and 66 percent of parents say they feel that their teen is addicted to their phone.” Since smartphones have become a distraction in many scenarios, Yondr cases are effective in different environments to enhance the experience while keeping the integrity of live performances.

Yondr cell phone pouches are now being used by various organizations to avoid cell phone distractions. Many entertainers such as comedian Chris Rock and musician Jack White have implemented this method at their shows and now, other entertainers are hoping to use this method for future events. Artists including Adele, Rihanna, Alicia Keys, Louis C.K., Guns N’ Roses and Dave Chappelle have already used the controversial Yondr pouches to stop people from tweeting or photographing at their shows. This method will also be used as a monetary supplement for artists since their live material will not be broadcasted to the world, people will want to see the show for themselves. With this implementation, people will not be able to find the event on the web or YouTube which will increase ticket sales and enhance the overall quality of show while the engagement rate will increase.

These little pouches are presented upon security at live events, your phone is then locked for a duration of time. Once the time is up, the person may return to the administrator to have their phone unlocked out of the pouch.

People tend to freak out when not in the presence of their cell phone, they may feel disconnected or experience phantom vibration syndrome.

Phantom vibration syndrome or phantom ringing is a serious issue that people across the country face every single day. This issue stems from the overwhelming desire to be in the presence of your phone every waking minute of the day.

“Phantom vibrations develop after carrying a cell phone set to use vibrating alerts,” said researcher Michelle Drouin, a professor at Indiana University-Purdue University. Additionally, “many people even get anxious if they can’t check in with their phone calls or social media.”

Valeria Essex, an entertainment seeker recounts her experience at a Chris Rock comedy show in Oakland back in Oct. 2017 which required her to lock up her phone. “It was an interesting experience. I initially felt a sense of panic as I have kids and if there was an emergency how would they contact me? I would have to step out and find someone who could unlock it. Then I felt my phone vibrate as I was receiving text messages, I realized I have an iWatch and my panic decreased. I then read my messages and could see if I was missing a call,” said Essex in an interview.

Essex said of her experience, “It really shows how we rely so much on cellular phones. Almost every waking moment we’re looking at our phones. It’s interesting to think how people were before mobile phones.” Overall, she had a better experience without her phone and the audience was more engaged with Rock’s performance.

In opposition, people may not be on board with on the idea of locking up their phone when agreeing to attend a concert or other live event. People who rely on their cell phones for work whether they be law enforcement, a doctor or anyone else who may have to be on call may pass up the opportunity to see the show which will result in a decline in ticket sales. Travel and tickets are expensive as it is so people may argue their rights to document their experience.

Yondr innovator Graham Dugoni founded his company in 2015 after developing a product that makes phone-free live events possible. If more artists find the phone cases effective, the company will see increased revenue in the years to come.