No, Oprah Winfrey should not run for president 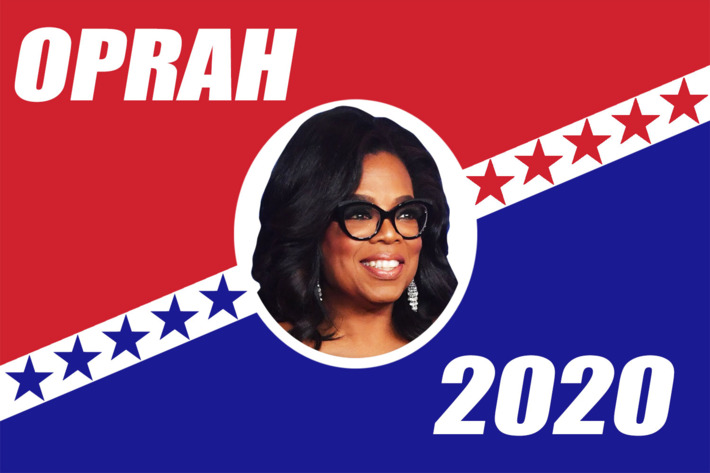 America’s unhealthy obsession with celebrities poses a grave threat to democracy
Now before you post an angry response in the comments section, or tweet to The Pioneer that I don’t know what I’m talking about, just hear me out.

If you don’t know why people are suddenly calling for Oprah to be on the 2020 ballot, allow me to fill you in. She gave a powerful speech at the Golden Globes on Jan. 7. In it, she highlighted the struggles of African Americans in the film industry. She touched on the harassment and misogyny that women in Hollywood are rising up against. Then, to a thunderous standing ovation, she exclaimed that “a new day is on the horizon” for all women who have been victims of sexual harassment and assault.

Immediately the Twitterverse lit up with posts urging her to run for president: “As I sit here in tears…I have never seen such a speech. Oprah, My friend. Please run for president. This world needs more of THAT. WOW,” country artist Billy Gilman tweeted. “Oprah was low key running for president with that speech…and I’m here for it!” comedic actor Andra Fuller posted.

Meryl Streep even endorsed Oprah’s hypothetical White House bid on “The Ellen Degeneres Show,” going as far as calling upon Tom Hanks to be her running mate.

There is no denying that Oprah is an inspiring figure and her speech was quite moving. The fact that we refer to her simply by her first name is a testament to that. But is she really qualified to run for president? No, she is not.

It makes sense why so many people want this. Oprah is a passionate speaker, tenacious, charitable and seems like a natural leader. All crucial qualities our current president does not possess. We have become so demoralized by the horrifying ineptitude of the current administration that we would rather have anyone else in the White House. The moment we see someone who can actually form complex sentences we immediately fancy the idea of them leading our country.

But are we really so desperate for quality leadership that we’re willing to put another celebrity in that role? I know what some of you are thinking. “Arnold Schwarzenegger was the governor of California! And so was Ronald Reagan, before he was twice elected president!” Yes, celebrities have proven to be successful politicians in the past. So why should we dissuade celebrities from entering the political arena now?

The answer is simple. Both Ronald Reagan and Arnold Schwarzenegger had political experience before running for office. Reagan was affiliated with the Republican party long before his bid for governor. Before that, he served as a spokesperson for General Electric, where he spread anti-communist propaganda in their ads, thus establishing him as a staunch conservative figurehead.

Schwarzenegger was appointed chairman of the Council on Physical Fitness and Sports by President George Bush. After that, he served as chairman of California’s version of the same council, where a ballot measure that he helped to write ended up passing.

It can be argued that all of Oprah’s charity work can count as political experience. But by that logic, the same can be said of Trump. In fact, nearly all of the arguments in favor of Oprah running were said about Trump during his campaign.

In the past, Oprah has vehemently denied any intention of running for president. “That is just not gonna happen, because that would not be my strength,” she told Entertainment Tonight in Oct. 2016.

After Trump’s electoral victory, however, she has publicly given hints of reconsideration. “I thought, ‘oh, gee, I don’t have the experience. I don’t know enough,’” she said in an interview with Bloomberg. “But now I’m thinking, ‘oh.’”

Other high-profile celebrities have proclaimed their intention to run for president. Dwayne Johnson recently told Variety Magazine that he is seriously considering a bid for the 2024 election. Kanye West said he will run in 2020, but he also said that he was the greatest living rock star, so that should be taken with a grain of salt.

We as voters must ask ourselves: is this really the America we want? Would we rather have movie stars and rappers holding the nation’s highest office instead of actual politicians?

The answer should be no. The general public is incredibly gullible, and there are plenty of celebrities who believe mind-bogglingly stupid things. This is a very dangerous combination.

Basketball star Kyrie Irving and rapper B.o.B have both publicly proclaimed that the Earth is flat. Hollywood is full of movie stars who urge parents not to vaccinate their children. Steve Jobs believed that his fruit-only diet made it so he never needed to bathe. The list goes on, but the point is that these celebrities have millions of supporters and therefore millions of people to brainwash with their insane ideas.

Trump’s electoral win should serve as a cautionary tale. Many people voted for Trump because they didn’t like Hillary Clinton, under the assumption that she would win anyway. Now, we are literally one tweet away from nuclear war because of that complacency. The world cannot afford the same mistake being made again.