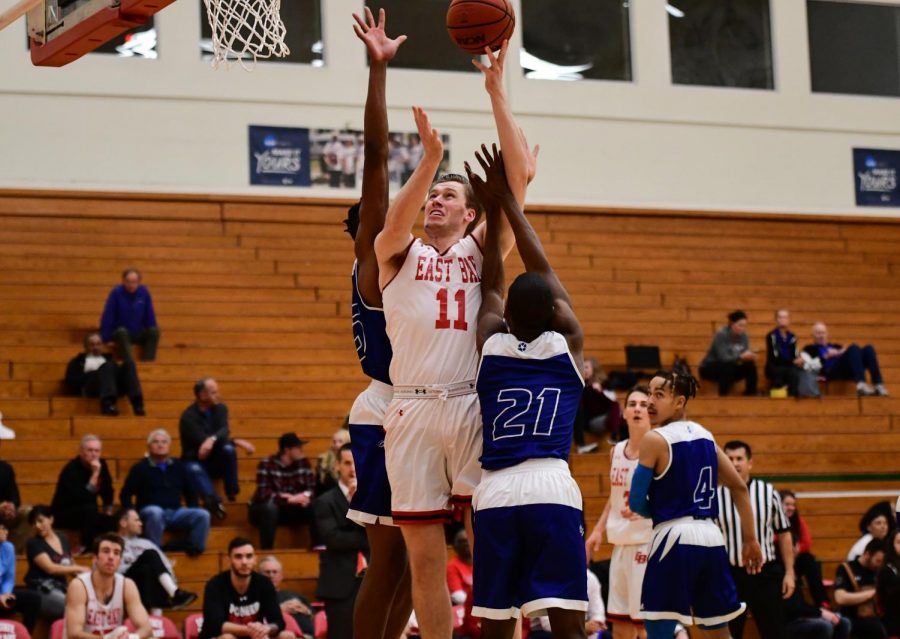 The Pioneers are currently on a six game losing streak and sit in 11th place in the California Collegiate Athletic Association (CCAA) standings with a record of 4-12 in conference play and 8-14 overall.

It’s been a rough season for the Pioneers, to say the least, and it’s showing in their play.

“This season has obviously been up and down,” senior guard Drew Bender said. “We have had highs and lows, but I think a lot of our laws are controllable.”

On Friday, East Bay went head-to-head against Cal Poly Pomona (15-3, 12-2 CCAA) who also happen to be the top team in the conference, so the Pioneers knew they would be up for a challenge.

The two teams went back and forth in the first half and it was a very competitive game, with each team having lead exchanges. East Bay shot well, with a 46.6 shooting percentage as they went 14-for-30 in the half.

Bender did well in the half, scoring 10 points to help the Pioneers go into halftime with a 34-27 lead.

“Right now we are really trying to focus more on ourselves and correcting our self inflicted mistakes,” Bender said. “It all starts there, I control how I play.”

Second half was a different game, and East Bay’s play plummeted. Their shooting percentage nearly dropped 20 percent has they were 28.1 percent from the field and only 6.7 percent from the three point line.

Despite the percentage, the Pioneers opened the half on a strong note, leading by as much as 10 points with 10 minutes left in the half.

With less than two minutes left on the clock, East Bay was only up one, but Pomona took the lead with 45 second left and never looked back.

All the Pioneers could do was foul as junior guard shot a jump shot with 15 second left in an attempt to take the lead, but missed. Pomona was able to rebound and converted both of their free throws to take the 60-52 win.

“We have shown we can play with anybody in our league,” sophomore guard Druce Asah said. “But we just need to close our games out better. That’s really what it comes down to.”

On Saturday, the Pioneers competed against the Cal State San Bernardino Coyotes (8-8, 10-10 overall) in what was their biggest loss of the season in terms of point deficit.

The Pioneers’ second half shooting percentage from the night before against Pomona carried over to the game versus San Bernardino, shooting only 37.9 percent from the field on 22-for-58 and 26.7 percent from the three point line.

On the flip side, the Coyotes had a shooting percentage of 58.3 percent, going 35-for-60 from the field with four players reaching double figures, so it’s easy to see how East Bay would end up losing by 21 points by the end of the game.

The Pioneers only lead once throughout the entire the game, and that was in the very beginning of the first half. From that point on, the Coyotes took control and ended the half leading by 12, with a score of 42-30.

The Coyotes completely dominated East Bay and led by as much as 26 points. There was no hope for the Pioneers and they were defeated 91-20.

East Bay has six games left in the CCAA, two of which will be away on Thursday Feb. 1 against Humboldt State and Saturday, Feb. 3 versus Chico State (11-4, 14-5 overall).