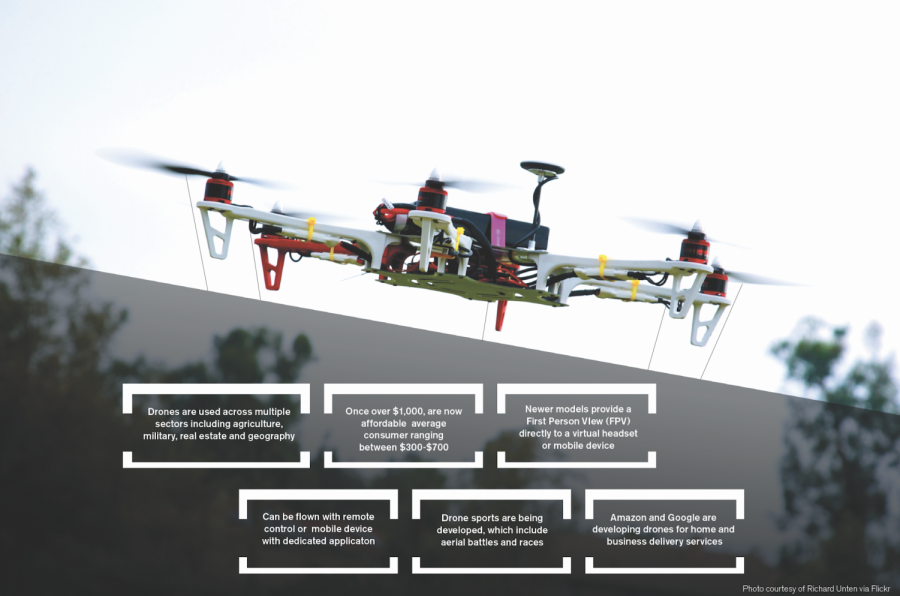 Civilian drones impact local air traffic
The phrase “Going Around” is hardly uncommon at Hayward Executive Airport. It’s a common radio message that signifies a pilot intends to abort a landing due to unsafe conditions.

But when I heard it one afternoon in late August, it caught my attention because something seemed different. I quickly looked in the direction of a single-engine Cessna coming in for a landing and watched the pilot turn the plane left and away from the airport in an effort to avoid a drone just off to the side of the plane’s path.

This incident was small, but not isolated. Two confirmed collisions between drones — Unmanned Aerial Systems — and airplanes occurred just in the past month: over a residential area of Queens, New York and in Quebec, Canada.

Nationwide, there have been 403 reports of hazardous drone operation in controlled airspace, between Jan. 1 and March 31, 2017, according to the FAA, 24 of which have occurred in the San Francisco Bay Area alone, and most of them in the vicinity of San Jose-Mineta, Oakland and San Francisco International airports. The Bay Area is home to 19 regional, municipal and private airfields as well as three military airbases, making this region one of the largest hubs of air traffic in the United States.

The rise of drone-related incidents comes as no surprise: sales of drones have skyrocketed in recent years, according to the Consumer Technology Association — a trade organization — and are projected to do so for years to come.

Hobby-sized drones are generally fairly small and often do not have navigation lights or collision beacons, making them difficult to spot unless in close proximity. This leaves very little time for a pilot’s reaction at high airspeeds.

In addition, it is extremely rare for drone operators to call Air Traffic Control or FAA for permission to fly outside of the boundaries that are generally permissible, or advise pilots of their intentions, much less equip their drones with transponders, radio transmitters that identify an aircraft for Air Traffic Control and other pilots.

In the case of the two confirmed collisions, an Army Black Hawk helicopter over Staten Island, New York and a Skyjet Airlines Beech King Air 100, the impacts were glancing blows on the extremely strong rotor blades and wings, and did not penetrate any flight-critical hardware.

However, one of the drone’s rotor arms and motors was found in the transmission deck, which if sufficiently damaged, could have turned the minor scratches into a fatal blow, sending the helicopter spiralling into the residences below, according to a helicopter maintainer at East Bay Helicopters at Hayward Airport.

While both of the recent drone collisions have resulted only in minor damage, it is not difficult for even a small drone to cause severe, if not fatal damage to an aircraft, according to the FAA and NASA engineers. Jets, as well as many helicopters and larger propellor-powered aircraft, rely on turbines for their engine, and often hydraulic power.

Simulations by CRASH Lab at Virginia Tech, NASA Ames and multiple third parties have shown that ingestion of a drone can damage blades and many other components, causing damage that could completely cripple the engine or send debris flying into other flight-critical systems and even passengers.

According to the San Jose Mercury News, Senator Dianne Feinstein has drafted legislation to broaden states’ powers to regulate drones in the name of public safety and personal privacy.

The Dutch National Police are exploring the possibility of training birds of prey such as eagles and hawks to attack drones in restricted areas. The FAA is also considering mandating that some drones be equipped with navigational equipment such as the navigation lights, transponders and TCAS systems such as those equipped on many manned aircraft.

Hayward Executive Airport officials confirmed that there have been drones spotted in their controlled airspace, but would not comment on any current or past incidents.

The FAA and NTSB have not yet responded to a request for comment other than to state that, to date, there have been no collisions with drones in the San Francisco Bay Area. However, according to Cal Fire, there have been multiple cases in which aerial firefighting operations have been interrupted due to drones flying in the vicinity of wildfires, including October’s Wine Country Fires.