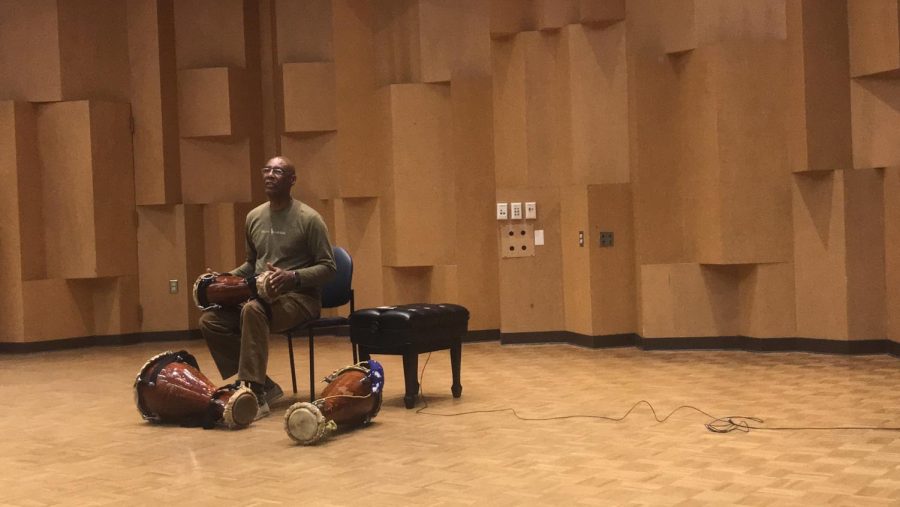 Playing music as a form of resistance
Drumming resonated throughout CSU East Bay’s Recital Hall on the Hayward campus on Monday afternoon. Dr. Peter Marsh from the Music Department brought in Afro-Cuban musician, dancer and teacher Roberto Borrell to introduce traditional African and Cuban rhythms to students, staff and faculty.

With his musical instruments, the bata drums, Borrell played and educated his audience on topics like Afro-Cuban religious chants and cultural music like the Danzon, Cha-Cha-Cha, Guaracha, Son and Son-montuno.

Finger snapping, foot tapping and head nodding was involved and the audience could not help but go along with it all. The fast paced rhythms and beats produced by every drum slap was hypnotizing.

Borrell grew up in La Havana, Cuba where music played a significant role in his daily life.

The music scene in Cuba was huge and while listening to music from bars near his home and watching people dance, he eventually became a master himself.

Tired of living under communist rule, Borrell immigrated to the United States during the 1980s when then President Fidel Castro allowed all Cubans the opportunity to do so. This generation of Cuban refugees are known as the Marielitos because they left via the port of Mariel.

It has been 47 years since he taught his first class in Cuba and he is still teaching.

He emphasizes the strong African influences that are a part of Cuban culture and feels fortunate to have been able to learn the traditional music, dances and preserve them before they were banned by the Cuban government.

Borrell does not have good memories living in Cuba under the Castro regime.

“Cuba’s government was enslaving and very oppressive,” said Borrell. He felt that being Black in Cuba was a crime and anyone who did not support the Cuban revolution or Castro had no freedom to do anything.

“Because Fidel took away the Cuban traditional music, the new generation was not familiar with it, so I began giving classes,” Borrell told The Pioneer. Teaching was his way of rebelling against the ban of Afro-Cuban music.

For Borrell, teaching Afro-Cuban drumming and dancing is a way to preserve and reclaim the lost culture that the new Cuban generations have lost, as well as introducing it to the world. He is proud of his roots but admits he does not miss Cuba.

Dr. Nicholas Baham from the ethnic studies department at CSUEB told The Pioneer, “For a good amount of time in Cuba, Cubans suppressed their blackness and there is still a same racial, skin color hierarchy that exists throughout Central America, South America and in the Caribbean.”

There are some Cuban restaurants and bars scattered around the Bay Area but as Baham commented, “There’s not a lot the Bay Area folks know about Cuban culture.” While there may not seem to be many Cuban or Afro-Cuban influences in the Bay Area, Borrell sees it gradually growing here.

Currently Borrell teaches Yoruba folkloric classes on Monday nights, Afro-Cuban popular music on Wednesday nights in a studio at home and folkloric music on Thursdays and Saturdays at the Mission Cultural Center for Latino Arts in San Francisco.

Here on campus, Introduction to World Music and Culture will be offered this winter quarter, which, according to Marsh, “will be on important works of music of different cultures, ethnic groups, and nations in a number of regions, including Africa, Latin America, and South, Southeast and Central Asia.”