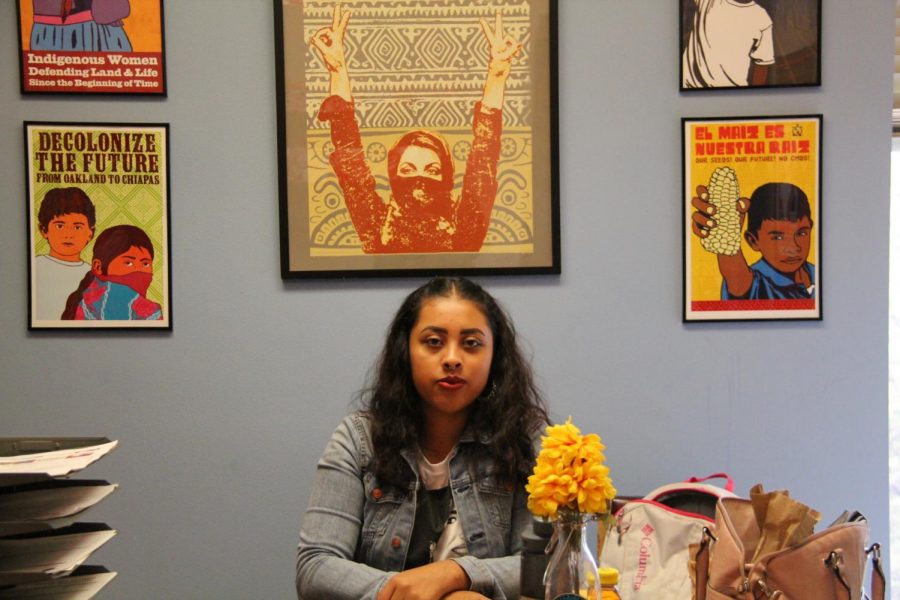 Imagine you are seven years old, alone and about to enter the country illegally with a false identity.

This was the reality for Cal State East Bay fourth-year student Evangelina Sanchez when she came to the United States from Mexico 13 years ago.

“We all got separated and passed through the border crossing with false identities,” Sanchez said. “My sister was turned into a boy. They cut her hair and dressed her like a boy.”

Sanchez, her mother and two siblings all crossed separately and designated a meeting point where her uncle picked them up. She said they stayed in the Los Angeles area for a week before her father came from the Bay Area to pick them up. Her father came a few years earlier for better work opportunities and to save some money.

The 20-year-old ethnic studies and political science major is undocumented, part of the Deferred Action for Childhood Arrivals (DACA) program, which was initiated by the Barack Obama administration in June 2012. According to the White House archives, the DREAM Act bill was created to allow people who entered the country as minors illegally to receive a renewable two-year period without deportation and eligibility for a work permit.

Sanchez is one of more than 800,000 people protected under the act, commonly referred to as “Dreamers.” Since President Donald Trump has been in office, he and his administration have hinted that the program could and in all likelihood, will go away.

“Nothing has changed for me,” Sanchez said. “Most people expected immigrants to be scared, afraid and make plans in case they get deported. My reaction was how do I move forward? How do I keep myself on track? How do I stay vigilant?”

Despite this uncertainty, Sanchez has continued to excel and answer those questions. She started a club here at CSUEB during the 2017 winter quarter called Students United in Solidarity whose mission is to raise awareness, through activism and education, about social justice issues that affect local minority communities while also exposing the campus to different cultures. The club was initially just for ethnic studies majors but once the university officially recognized them over the summer, it was opened to students of all majors.

“You fear the person you don’t know in the room,” Sanchez said. “Once you know them, the fear goes away. We want to break those barriers and end the era of not knowing what is going on around you.”

The club recently held a Dia de los Muertos celebration where they sold candles for future projects and raffled away artwork, some of which was created by Sanchez herself. Creating a club was no new feat for Sanchez; she did the same thing while in high school in Berkeley. She was part of an organization created through the Berkeley YMCA called Y-Scholars that according to their website, was created in 2000 in collaboration with UC Berkeley in order to, “Address the achievement gap at Berkeley High School.”

Sanchez said the leaders wanted to start a new program called Y-Dreamers to help undocumented students, which is how she got involved with its creation. CSUEB liberal studies major and ethnic studies minor Danica Hoeprich is a member of Students United in Solidarity and called Sanchez intelligent and authentic.

“She is a natural leader because she has a lot of energy and is gracious when it comes to teaching,” Hoeprich said. “She has a clear vision of how to conduct movement and change. She learns about the reality of the world and is not bitter or anything, but empathetic and welcoming.”

Sanchez also spearheaded the push to get a space on campus called the Ethnic Studies Lounge, where the club and ethnic studies students can meet to study and collaborate.

She has come a long way from the seven-year-old who could barely speak English when she arrived in the country. Although there are plenty of resources now for undocumented students, Sanchez recalled a time when that wasn’t always the case. She said she was put into a normal class when she arrived here and there were no English as a Second Language classes or resources. Luckily for Sanchez, she had a teacher who spoke Spanish and was sympathetic to her situation.

“I was always somewhat aware but I didn’t start to learn how different I was until I started to learn what was taken away from me,” Sanchez said. “My junior and senior years in high school, I started looking into scholarships and applying to schools but I realized I wasn’t eligible for a lot of stuff. After school programs helped me find options available for undocumented people, but it was first time it really hit me how different I was.”

Sanchez said only her closest friends and family knew about her undocumented status at that point, but those experiences encouraged her to be more vocal about it and her own experience.

Now with the DACA program in limbo, Sanchez is unsure of her future, but is focused on completing her studies and graduating. Sanchez renewed her work permit just a few months ago, which is set to expire in August 2019. She said all she can do is, “Keep moving forward and try to accomplish as much as I can while I am here.”