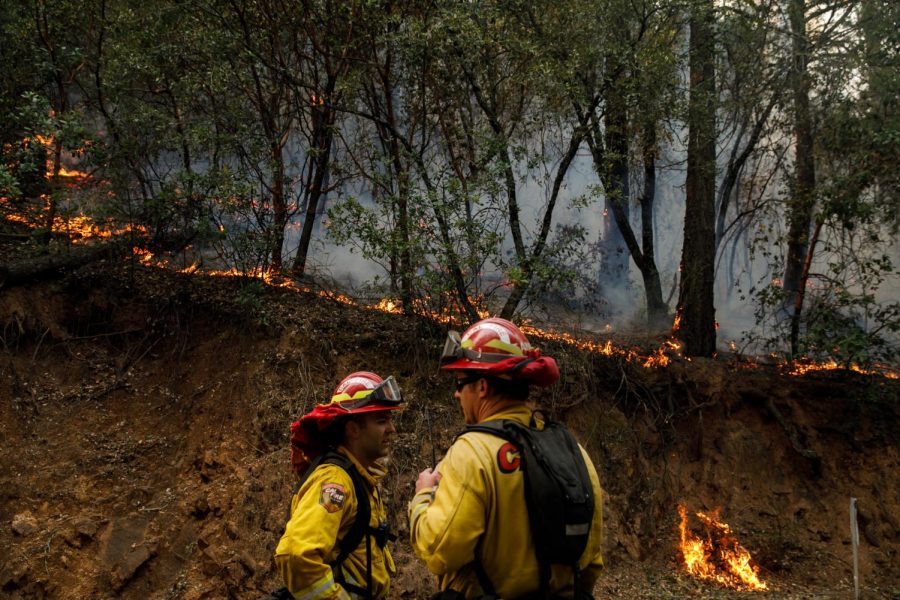 In the month of October, California’s North Bay was faced with what is now being said is one of the worst natural disasters in its history. The wildfires of Sonoma, Napa and Santa Rosa County caused hazardous air quality, smoky skies, and mesmerizing sunsets throughout the Bay Area.

In the weeks during and following the fires, firefighters worked to control and contain the fire emergency responders worked to evacuate the people in danger, but Sonoma firefighters and police officers needed help, and neighboring Bay Area cities and counties quickly responded. As many as 10,000 firefighters from throughout California and surrounding states battled the fires around the clock, according to the Los Angeles Times.

Officer Czar Valdehueza of the Union City Police Department was part of the additional help. He has served as police officer for 14 years and his agency was one of the ones that got called out to assist in the Sonoma County wildfires. He got the call on Oct. 12.

“I saw what was going on in the news and I can smell the smoke in the air, due to living not too far away,” Valdehueza said. “I was more than happy to go out there and be a part of helping.”

When deployed to assist in the Sonoma County wildfires, Valdehueza was assigned to evacuate people and make sure no burglars were taking advantage of empty communities and breaking into homes. While on assignment he was ordered to check on residents who refused to leave their home even though they were asked to evacuate.

He checked in on a residents whose possessions and everything they had was with them in their home and they would not leave. He and his partner also got called out to an active fire in the backyard of a house. They had to control it with a water hose until the Fire Department arrived.

“That’s all they had left, they wanted to be with their house. If their house was going down, they decided they will go down with it,” Valdehueza said. “I saw the true definition of all time low, people were left homeless.”

As early as the start of the fires, San Francisco Fire Department was quickly called in for assistance. Newly retired firefighter Doug Manguiat of SFFD was in contact with his fellow firefighters of SFFD who had gone out to battle the wildfires.

“Fighting fires like this are about a week-long commitment,” Manguiat said. “It isn’t anything like the normal hours. My buddies got called out that Sunday and have been there for the last week and half.”

The retired firefighter continued to check in on his late colleagues, as he too was worried about their safety.

“In disasters like this the team is split up into shifts,” Manguiat said. “However, my buddy Mariano said that there had not been time for any rest. He was about ready to take a break after 48 hours fighting the fire and within a couple of hours as he tried to sleep, they were called back for all hands-on deck because it was uncontrollable. In my 40 years of serving, I could have never imagined such devastation until now.”

As emergency responders work to protect the lives of the North Bay Residents, an estimated 5,700 structures had been destroyed, including whole neighborhoods reduced to smoldering rubble, according to The Washington Post.

Napa residents and newlyweds Robert and Marissa Reed, were among the fortunate few who did not have to evacuate their home. However, they were still a part of the chaos with road closures, knocked down power lines and cell towers due to the wildfire. Although, their home was not burned down, the wildfires still affected their daily routine.

“I had to find another way around to work in Oakland due to part of highway 101 being closed and SMART (Sonoma Marin Area Rail Transit) being shut down,” Mr. Reed said. Part of highway 101 and SMART had closed down do too little to no visibility due to fire smoke. Robert’s commute times doubled.

His wife, who works from home had to drive around to different coffee shops with working internet to get some work done and get cell signal. As Robert worked in Oakland, he had asked his wife to continuously check-in with him as wildfires continued to spread through other neighborhoods, to make sure she was always safe.

“Yeah, it’s been tough, but I am still very grateful that it was not as bad as other people who lost everything in the fires,” Mr. Reed said.

Many of the people that became homeless due to the fires have stayed in shelters like the Finley Community Center in Santa Rosa. Many evacuation orders have been lifted and many residents been granted limited access back to their homes.

“The amount of damage, the enormity of it, can’t be exaggerated. But the response can’t either. There are many people trying to restore normalcy,” CHP Jon Sloat said to The Press Democrat October 21.

Now that the fires are being contained, there is still a lot of work to be done due the aftermath that was left behind. Anybody that can help in any way are encouraged to do so. Information on how someone can help can be found on the Sonoma County website including updates from Cal Fire and Emergency responders and community information.