Time not of the essence for East Bay shuttles 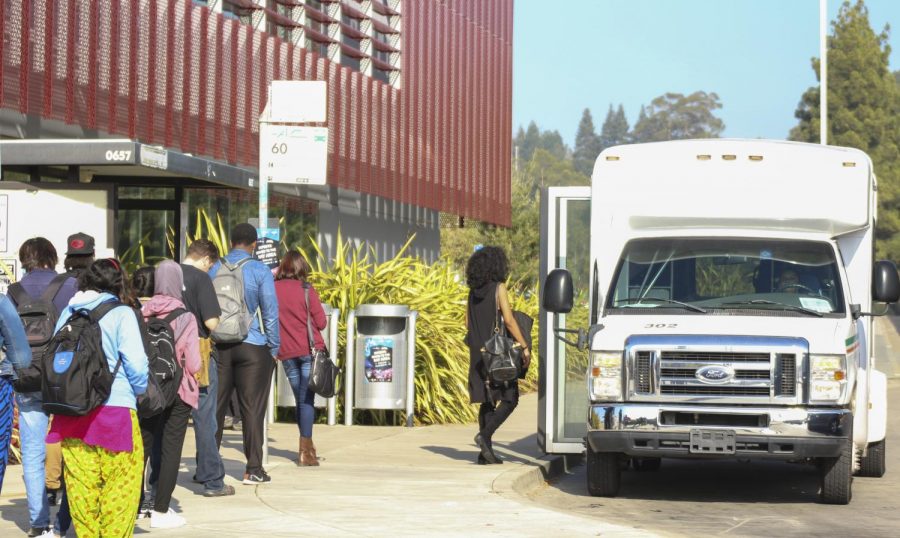 What ever happened to that sheet stuck on the pole that would tell you the approximate times the Cal State East Bay shuttle should arrive?

It’s annoying how it always ends up disappearing — but then again what good does that timesheet do if the shuttle is hardly ever on time anyway?

It’s exactly 9 a.m. and I’m sitting on the bus bench in front of Buffalo Bill’s Brewery in downtown Hayward, waiting for the shuttle to come… eventually. I have my earphones on and I’m thinking that I should be productive and read the book I have assigned for class as I wait for the shuttle, or maybe I should get a matcha green tea latte from Eko Coffee Bar and Tea House since I’m staring right at it, but what if the shuttle comes and I miss it? It’s best if I stay here just to be safe.

My class begins at 10 a.m., but it’s preferable to be at the shuttle stop an hour before because you can never tell when the shuttle will arrive, unless you want to risk being late all the time. Waiting for the shuttle feels like an eternity most of the time so when I finally catch a glimpse of that big red bus turning the corner, I am filled with relief.

You can always look online to find the shuttle times just in case the timesheet isn’t stuck on the pole how it should be. The times are like a pattern, it says there should be a shuttle arriving to campus every 10 to 15 minutes and the same goes for the Hayward BART Station stop. Yet I always find myself waiting for an extra 10 to 15 minutes at these specific stops instead or even longer depending on the line of students waiting.

The schedule for the other three stops between East Bay and the BART station state that it should take about 20 to 25 minutes, which I admit is fairly accurate, but closer to 30 minutes in reality. That is too long to wait, especially if you think about how many students use the shuttle.

There is a phone number riders can call to complain if the shuttle is running at least 15 minutes later than the stated time it’s supposed to arrive. This number is at the bottom of the shuttle stop schedule found online which also indicates that traffic and weather may affect the time schedule. Several fellow students who take the shuttle daily did not know about this avenue to voice their gripes.

I am usually done with classes around 4 p.m. and that is a terrible time to take the shuttle. I’ve been on campus all day , I’m exhausted and I’m done with school for the day, but instead I am in an extremely long line hoping that I’ll be able to find a seat and not be told to wait for the next shuttle because that one is full. That is frustrating.

On a typical Thursday afternoon waiting in line for the shuttle, Brandon Martinez a junior Environmental Science major at CSUEB, who was in front of me in line, looked at the cars going down the hill leaving campus and commented, “The cars I see coming down Harder are always filled with only drivers… no passengers, which makes me wonder if anyone has signed up on Zimride; it’s times like these [when the shuttle is late] that I’d really like them to hook it up.”

Martinez said he has been late to class twice this quarter because the shuttle got full and he had to wait for the next one.

Many students end up taking the 60 AC Transit Bus because the shuttle takes too long to arrive. If students rather take the city bus instead of the campus shuttle where you do not have to pay, there is clearly an issue going on.

I know I am not alone on this and most students I talked to that commute to school using public transportation have complaints about the shuttle service.

I know despite my strong feelings, many students disagree with me and think the shuttle service is just fine. Our school offers a free shuttle service, we should be grateful for that, it isn’t the best but this is as good as it gets for free.

The shuttle arriving every five to ten minutes as recently stated, is a bit controversial as many students have experienced otherwise, claiming it usually takes longer than that.  She leaves no doubt that the shuttle has needed improvements in the past and admits that “there’s always room for improvements.”

With the whole issue of students having difficulties finding parking and arriving to campus hours ahead of their class just to get a decent parking spot, some would rather take the shuttle and not have to worry about that. Especially with the parking fee as well, taking the shuttle means saving $130 a quarter on a permit.

But is it really worth the waiting in line hoping there will be a spot for you? Arriving late to class because the shuttle was not on time? Not only does parking seem overcrowded but so does the shuttle. Just as looking for parking can make you late for class so does the tardiness of the shuttle.

“I’ve heard some complaints about shuttle drivers coming late, but once again it is mostly because of traffic,” a shuttle driver who wished to remain anonymous told The Pioneer.

Obviously, there will be some traffic throughout the week in Hayward and especially around a school area like CSUEB, but this is a public transportation service and it should be prepared to deal with traffic, weather, or any other incidents that may delay arrivals and departures.

The shuttle driver suggested that, “at least one more driver between 8 and 10 a.m and one more between 2 and 6 p.m.,” could be a solution for the shuttle to arrive on time, since according to the driver, these are the busiest hours of the day. The shuttle service comes out of our tuition, and as a student here, I expect it to be better since it is coming out of my own pocket.

“We do look at reports when we receive calls regarding the shuttles being late and talk to the shuttle drivers to see why they were late” Amaral reassured The Pioneer.

Soon we may be seeing better equipment on every shuttle stop regarding the time schedule sheet. Since there is an issue with the time schedule disappearing from the shuttle stops, which there’s no found answer to that except the probability of vandalism, the Parking and Alternative Transportation Services Department are looking for a solution to that. Amaral guaranteed better time schedule poles that are locked and secured so it won’t keep disappearing.

The Parking and Alternative Transportation Services Department reassured The Pioneer that they are working on improving their shuttle services. Their schedule can even be found on the CSU East Bay Mobile App alongside the AC Transit and BART schedule to make it easier for students.

The shuttle should be capable of providing better services for the students here. This is something that the Parking and Alternative Transportation Services department should keep on improving. Even if the shuttle has improved compared to two years ago, the perspective of the students towards the shuttle says a lot on how they still have a lot to work on.

The shuttle is definitely a great alternative for commuter students who do not own a vehicle, but it should not make students late to class especially since it is out of their control.

As students, the best way to address this issue would be to contact the TransMetro dispatch at (415) 259-4746. Not many seem to know about this, so the better we know, the higher chances for the shuttle service to improve faster.