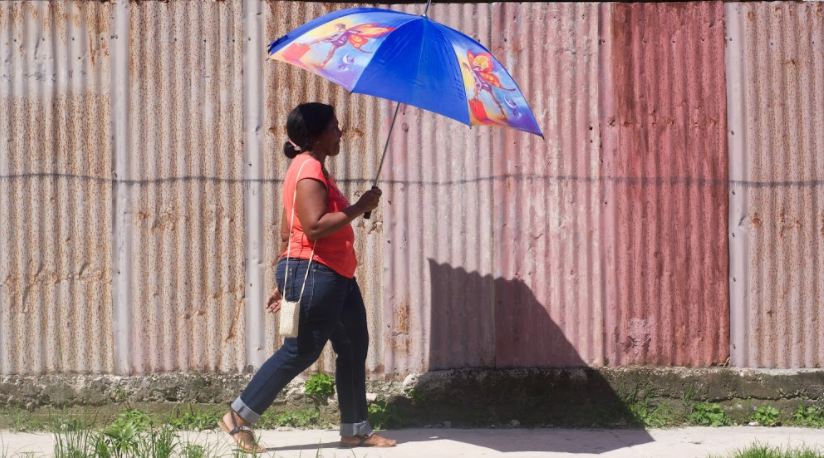 We all need water to survive, we need dirt to plant seeds and the mixture of the two creates an element that we need in order to grow. They call this little community in Cuba the “Mud,” but not for the way I see it but because it is dirty and poor. Poverty is something that exists but nobody really talks about it. Maybe it’s not addressed because people don’t want to be reminded of the things they are letting pass or maybe society just doesn’t care. In the community known as the “Mud,” people are staring at me as I walk through their neighborhood with my camera not even using it. Out of respect, I don’t even bother to look them in the eye and stare back as I would normally do if someone was making unusual eye contact.

Not only in the city of Havana but worldwide, a home usually isn’t considered a home without a family even if you do live alone. Dark green and black fuzzy mold, attached to an odor that smelled like wet dogs, was lingering to the concrete wall as children sat beside it. I walked into the apartment complex that was dark and steep as I reached the top of the stairs, I noticed a woman hang drying her clothes off the balcony. The balcony looked like it was about to fall off, I was actually kind of scared to walk on it.

Many big two-story houses were once owned by one family and for many reasons were abandoned and are now occupied with multiple families living in a house. However, the houses were left in poor conditions or were never restored due to financial issues. In some houses, there’s not much access to electricity or very little; most homes used lights from the windows. According to Dario Berrebie, he states, “Sure, compared to the rest of Latin America, Cuba is doing far better.” It made me wonder what could be worse than this, that many people might be facing across the world.

A box with rusted metals and wooded planks hammered to each other was already falling apart due to the poor materials and tropical weathers that cause erosion. A family lives in this shack I just described; there was garbage outside the house that had been there for weeks. They say everyone is equal but to me, there’s a difference between equality and equity. Back in America, CPS would show up at someones door or maybe even take away kids from the place they consider to be home. Thats what happened to my mom. I find it interesting that people can live off the bare minimum to survive and be unbothered, whereas, in places like the Bay Area, homeless people are kicked out of their tents, etc. No, I didn’t live with my biological mom when she was arrested at a homeless camp, but I was informed of the incident which brings a tear to my eye when I think abut it. I wish we supported each other in times of need as a community rather than bash the people for not being socially accepted class wise and thats what I appreciate about the Cuba people.

Pride can be the ending of relationships, it can be a failed grade, but it can also be the hunger of many cuban people. Everybody in Cuba is guaranteed rations, a bread a day, five eggs per person, five pounds of rice, etc., for each family member. There are many people who are thankful for the free food but there are those who are too prideful to take handouts. I have witnessed that in my own home. I remembered begging my dad to apply for food stamps because I was always hungry, but he would never listen to me, I wonder if the kids in the community feel the same way about their parents decisions.

Furthermore, the markets in these communities offer fresh produce, but the only catch is the fruit is not ripe. They have to wait to eat it or pay more elsewhere for quality fruit. Even the sandwiches were not really sandwiches. People in the US go to Subway or Togo and get a lot of items on their bread but in Cuba it’s literally just a slice of bread and a slice of meat. When I ordered it, I had different expectations and it tasted exactly how it looked for one dollar.

Every community I visited had graffiti though it may be vandalism. In my eyes graffiti is art; it’s what kids in my community including myself used to do to express ourselves. Seeing graffiti definitely signifies you’re in the ghetto because in higher class areas of living graffiti is rare. However, graffiti is the least of people worries.

Many people are asked to leave their poor conditions but it’s rare when they do. It seems as if the relationships with their neighbors make up for the poor and unsafe circumstances. According to Cuban people, there are no class levels or they just don’t admit it. They believe people all live equally and as long as they have food, shelter and electricity; they do not consider themselves poor. The Cuban people feel free and safe. An anonymous man stated, “There’s no violent crimes, maybe a few drunk arguments but every community has its problems.” Another lady expressed how she felt free which was an important entitlement to her: “I travel where I want, I eat where I want with no problems.”

A majority of the Cuban people I interviewed lived in their homes almost their whole life. One lady mentioned what she liked best about her neighborhood was the relationship. An anonymous source said, “We support each other.” It is very common that a neighbor will give food or other necessities to a household in need because their neighbor does not work or is disabled. In the US I don’t think I’ve ever heard of such a thing; most people in poor communities lock up their house and try not to communicate with each other. We also depend on welfare, child support, disability and food stamps if we cannot provide for ourselves temporary or long term. An anonymous man stated, “Nobody comes here. You’re the first tourist I’ve seen,” and that’s exactly what I wanted to hear. I knew nobody really wanted to come to these neighborhoods because it wasn’t geared towards that clientele.

There are no playgrounds or community centers for youth living in these neighborhoods, so I assumed kids might get into more trouble. However, in Cuba, the crime rate amongst juveniles is fairly low. Cuba happens to be one of the safest countries. For the kids who did get into trouble for behavior issues, they usually go to facilities to learn how to transform or improve their unacceptable behavior.

For many kids and young adults, “To know what is good, you have to know what bad is,” Licide mentioned. However, most kids are let back into their unstable homes and the same schools, so if the community around them doesn’t change how are they supposed to escape? If a child is required to do homework but is unable to do so because their household doesn’t provide the tools they need to be successful, such as a table and a pencil, how are they supposed to complete their assignments? Let’s just say many homes really struggle with that same scenario.

Furthermore, I did notice a lot of kids play soccer in empty fields or simply gather on sidewalks. It was usually the younger ones who couldn’t travel far. Youth sure have an imagination; I recall having a blast on top of garbage cans I used to play on. There were also some adolescents in various communities like the ones we encountered outside of our hotel who had tattoos and piercings at the ages of only fourteen, much like myself.

A lot of people assume parents don’t take care of their kids because of activities like those, especially in poor communities. In reality, many parents are at work and don’t have time to watch them especially during the summer. Licide mentions, “No one really watches their kids, it is very safe in the streets they run.” This doesn’t mean that parents tend to approve of their child’s actions, they are just focused on supplying the bare minimum for their family.

Overall, a majority of people think being poor in America means not having a car or a house or even a degree. We cherish a lot of materialistic things that money can buy. In Cuba, being poor doesn’t require money. Licide stated, “Poverty can’t be related with money.” Someone can be poor in the mind, as long as you make the best of what you have you just might be the richest at least in the cuban communities. Even though I felt sad about the circumstances of the people in these communities, I knew they were content with their lives.