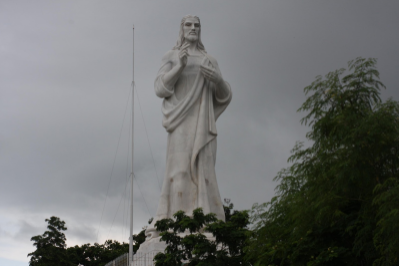 As I’m taking in the sights and sounds of Cuba, I realized that I have only stayed in Havana and hadn’t been to other cities such as Casa Blanca. I knew that it in order to get an idea of how most Cubans live, I would have to get out of my comfort zone.

Public transportation is key in this country as most people depend on it, yet compared to what I’m used to back in the Bay Area, that was a pony ride compared to here. In order to get a good price on a taxi, I had to walk to the US Embassy then tell the driver where I was going in hope that he would understand.

The problem with not speaking fluent Spanish is that the driver can interpret where you want to go and drop you off at a completely wrong place, which happened to me. To not make it seem like it was a bad thing, I took it with stride and relied on hand signals to get to the ferry building.

Even though there are signs on the boat telling people smoking isn’t allowed, people still do it. As the boat was chugging along, I was worried that it would tip over because of how old it was. While the captain was driving, I noticed that the water looked like brown sludge because people dump all of their trash and the boats have to find an outlet for the excess fluid.

Arriving at Casa Blanca felt like a culture shock as most of the people who visit are there to see Che Guevara’s house and the Jesus Christ statue. While walking I had to watch my step as I didn’t know what I was stepping in. People don’t want to talk to you unless you are alone and even then they are worried that you might expose what they are doing, such as tattooing with non-sterile equipment. Though it felt as if the trip didn’t help me enough with my project, I was able to meet a nun from Miami that told me if I ever needed help, to go to the convent and ask for her. This showed me that it’s always best to get away from what you know because you don’t know what lies ahead.

All around Cuba I have noticed stray dogs and cats walking around and people aren’t afraid to give affection and take care of these animals. They are considered the country’s dogs if they have a tag but they tend to spend their time outside of the shelter. On the flip side, people have dogs that I didn’t think they would have here in Cuba such as huskies, Dalmatians, and German shepherds.

What shocks me the most is that people are allowed to breed dogs and sell them in Old Havana and the police don’t bat an eye. I was shocked to see dogs in overcrowded cages while tourists look on at them and they don’t question the ethical practices of how this is wrong and should be illegal.

In the United States when a person finds out about puppy mills where dogs are being bred and kept in inhumane conditions, animal control is called and the person who is breeding the dogs are arrested. It’s the opposite in Cuba, as this is how some make money because they know the police won’t do anything.

It made me sick when I saw puppies laying on top of each other and all I wanted to do is take them home with me. When the breeder happened to glance down and noticed they had little water, he lifted and tossed a Dalmatian puppy to get to the water bowl. I wanted to yell at him but I knew that would achieve nothing.

Coming back from Cuba has been a culture shock as I get used to all of the necessities and conveniences that I gave up two weeks ago. As I was heading back to the States, I got excited about being able to drink water without sodium and eating food that wouldn’t make me sick. It also hit me that I would have to ease myself back into my normal routine, as I had been mostly off the grid.

In Cuba, I didn’t always have access to the Internet so I had to settle for messaging my family and friends every couple of days when I had an Internet card. My body had to settle as well with being dehydrated as a result of drinking water with sodium in it. That all changed when I boarded the plane bound for Los Angeles.

It hit me hard while on the plane that I was able to drink water from home that my body was craving, as I didn’t have an adequate supply of it in Cuba. Along with water, my phone started to buzz when we landed at LAX with emails and Facebook messages. I noticed that I didn’t care anymore about what other people were doing because I just had the experience of a lifetime.

There will always be a part of me that will miss Cuba and I want to return next summer to follow up with the people that I met and give them supplies that I take for granted such as clothes and medicine. I also want to take my family because I want them to experience what I went through. This whole trip has enlightened me to be a better person and I can survive without my phone because in the end, only we can tell our tales.