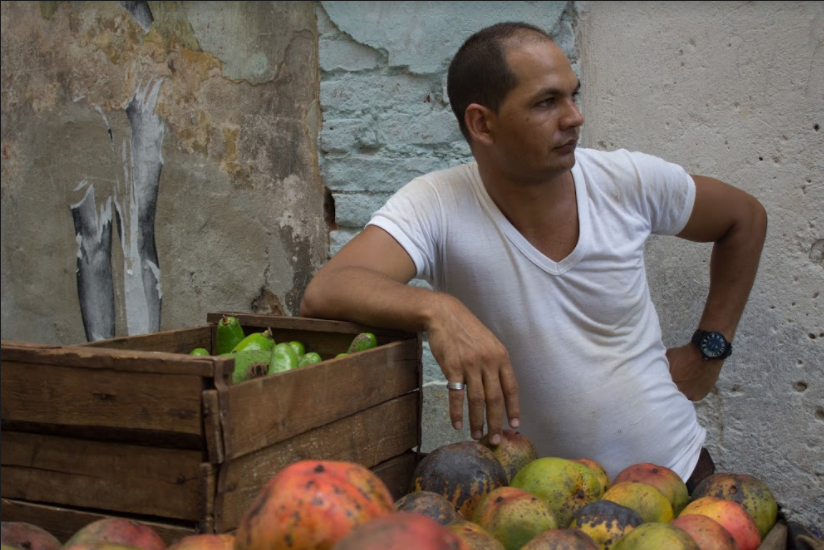 We as Americans take the most common things in this world for granted. We don’t even lift an eye to where these goods and services come from. The only thing on our mind is that we get them and that we can access them quickly. Here in Cuba, this is not the case. People can’t just go to a store and get what they want or need.

I experienced this myself on Monday, July 3rd when I went to a grocery store with a group of students that I am traveling abroad with from California State University East Bay. The store itself is what we would call a “government store.” This term is used to describe stores specifically owned by the government. Government stores are common in communist countries such as Cuba.

While at the store we met a lady who handed out tickets to hold our bags, like a coat check at particular restaurants. There were not many items on the shelves and there was a long line near a register. As we tried to move past the line to browse the local goods, a lady held us back while telling us that we had to wait in line.  We began to ask whether the locals knew if the store had any water available. On finding out that the store didn’t carry water, we thanked the people for their politeness and proceeded to leave the establishment.

Its moments like the one previously described that change my whole perspective on my views back home. As a whole, we as Americans are careless, wasteful and highly over-privileged. We get angry at the tiniest inconveniences because we believe we weren’t treated like we were supposed to be. This outlook and view on life is downright revaluating. How as a society can we believe that one person is better than another?

Another example of Americans taking things for granted is the accessibility to items such as water, food, toilet paper, and the Internet. These four items are things that Americans take for granted because of how easy it is to acquire them. To compare to another country that is less off, I have already experienced difficulties with all four common items.

I have run out of cold water within five minutes of entering a shower. I have seen the shortage of food. Bars and restaurants run out of things constantly every day. This is common here and basically accepted. People move on with their daily lives instead of moping around because they didn’t get what they wanted.

I’ve only been here for three days and have already noticed my change in perspective. I truly appreciate every bite of food I take instead of scarfing it down. I savor any bottle of water I can. I have moved forward through a place that is known for its less-than-spectacular Internet service. Americans must understand that we are not more privileged then another human being.

We must learn to appreciate everything we are given each day. The next day may not come for us and one may regret not appreciating life more. We must learn not to complain, for this is the only way we can be happy and content with what we already possess. We are gifted with happiness, abundance, and free reign. To take these for granted is to steal from your own life, for we are all connected and we all fall and get up together.

Friendliness of the Cuban people

Since coming to Cuba, I have noticed the difference in how the Cuban people interact with others. In particular, in the way that they interact with strangers on the streets. My observations have brought me to the conclusion that Cuba is what we would call a “high context’ society. This is a definition for cultures that put emphasis on interactions between others. This can pertain towards getting to know someone more in depth, close contact, and relations between each other before conducting business.

While being here I have come into contact with a few of the locals. Most have been very willing to start up a conversation or to give help when asked for it. I even met some locals from old Havana at the beach. We related to each other by a common interest for the same sports teams from the Bay Area. After getting to know about one another, they offered to show me the sights of old Havana from a local’s perspective.

This is very different from the United States in my opinion because the U.S. is considered a “low context” society. This term is given to cultures that are more about the business side of things and less about getting to know the other person. We as Americans are also hesitant in getting close to each other. We like our personal space and feel uncomfortable when someone enters it.

I have encountered this opposition in the states many times. I have been able to observe people’s body language as I attempt to interact with them. I don’t know why so many Americans are so quick to push others away in order to stay in their comfort zones. Maybe it’s just the easiest way and that’s the way most people decide to live their daily lives.

This is not the way I want to live my life though. After only being in Cuba for a mere six days, my perspective of those around me has changed. I want to journey away from the “low context” and enter the “high context.” I believe that allowing others to enter our lives helps to better our own personal lives in return. By doing so we can become better people and a better society. In the end, how much harm can really come from simply saying hi to the world around us?

I was given the opportunity to go to a local Cuban household. This was made possible by Mario, who is one of our interpreters. The group consisted of Pete, Eva, and me. We were accompanying Pete on his project, which specifically deals with old cars and their upkeep here in Cuba. We also met one of Mario’s friends who owned an older car himself.

We all met at our hotel and were provided a ride to a mechanic by Mario’s friend. The mechanic was a family friend of Mario’s who lived towards Playa Santa Maria. We were met with pleasant greetings by the mechanic and his family upon our arrival. As Pete proceeded to ask questions, Eva and I were presented with homegrown mangos. I dont know how they taste yet since mine is still in my hotel fridge.

Mario preceded to take us around behind the house where the mechanics conducted their work. They even brought a car to the work area so that Pete could examine it. After Pete conducted his interviews, he requested that we make a seperate video for himself. In this video he proceeded to talk about the car in front of him in Chinese. Eva and I conducted the video professionaly and recorded very good film footage for him.

Upon completion of the secondary video, the mechanic brought Pete along to a second mechanic to interview. Eva and I stayed back with Mario and the rest of the family. We were given delicious mango juice and even got to meet their four-month-old son. Mario also showed us all the roosters on the property. We were told they were used for fighting mainly, which was astounding to me due to the negative reception in the States.

Its fascinating to me how open the Cuban people are. They have been very inviting to most of us depending on the situation. For example, Mario’s close friends welcomed us and provided refreshments and food. To me, this is very rare nowadays where we are from. It’s something I’m not used to, but it was very reassuring as well. Im very glad to be able to experience moments such as these.

Without the drive to see different worlds and different cultures, none of these experiences would be possible. I personally feel like I have learned so much about being open minded in the past week alone. If people were to ask me if I would do all this again, I would tell them yes. We only live once so we must enjoy each day as our last. This can help us to feel satisfied with the world around us and the life we live, in my opinion.

Before coming on this trip to Cuba, I had the impression that I wouldn’t be able to communicate with the locals. I have taken Spanish before in high school, but that was around 10 years ago. Thus, I was very nervous about how successful I would be by the end of our study abroad program in Cuba. Over the time while in the country, I had an experience that blew my mind and set me on a course the rest of the last week I was there.

I decided to head out on my own to take photos at a nearby skateboard park. This park was the first government built skate park to help promote the sport. I decided that I was going to try and only communicate in as much Spanish as I could. I was able to order a taxi from the hotel without any problems. From there I made my way to the Plaza de Revolution.

Upon my arrival, I thanked the taxi driver in Spanish and proceeded to walk to the skate park. The park itself was only a 10-minute walk from the plaza and luckily there were some teenagers there already. I first sat on a bench, scoping out the scene in front of me, before one of the teens approached me. We greeted each other and laughed over our common interest in a skateboard company called DC Shoes.

The teen in question spoke only a few words in English so it was time to try my best to communicate in Spanish. To my surprise, I could tell him and his friends that I was a skateboard photographer from America. Even though all the teens used rollerblades and BMX bikers, they crowded around me in excitement. They were more than happy to let me take their photos as they attempted trick after trick around the small park. After an hour or so, we said our goodbyes and went our separate ways.

It’s crazy to experience how much the human brain can recall with just a few simple words. The previous example helps to show how powerful our brains really are and that no one should say they can’t do something. By that one simple act of going out alone, I slowly continued to recall almost everything I had been taught back in school. I even went on to try and learn more Spanish as the days went on.

This trip has pushed me to want to learn even more and to push my brain as far as it can go. I plan on building on what I learned and to help teach others to experience the world around them. Who knows what you might learn about yourself. You may even discover talents that will help push you towards the success we all seek.