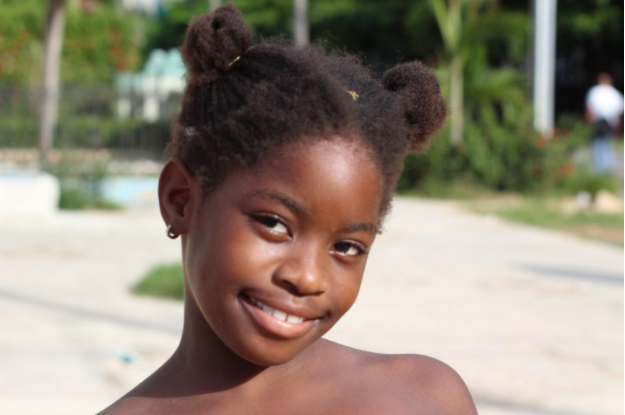 A Cuban is a Cuban

In the United States, there are African Americans, Chinese Americans, Mexican Americans and many more Americans. Although it is not directly defined by race, wealth, livelihood and overall quality of life is differentiated culture to culture, neighborhood to neighborhood. In Havana, Cuba, although it seems to be stuck in the 1950s, segregation and discrimination based upon race seem to be almost gone. Upon talking to a club goer and a tour guide, being an Afro Cuban is not exactly a “thing.” A Cuban is a Cuban no matter the cultural background. Cuban history, love and of course the revolution triumphs differentiation and division of the people.

According to Raul, an Afro Cuban dance instructor, the Cuban culture is inclusive and everyone is equal. The janitor and the doctor’s salary are not too far from one another which does not create a wage gap between the two. Also, neighborhoods are diverse in term of the people living in Cuba. Black and white men and women fill the run-down apartments in old Havana and the children, mixed, Afro Cuban and white, play together.

It is beautiful and refreshing to see unity amongst the people in Cuba. Cubans love their people and they love their culture.

The solidarity the Cuban people have for one another is inspiring. It would be amazing if America could take notes. In the United States, people buy their status usually from the salary they receive from well- or better-paying jobs than other Americans. If an American is wearing a Louis Vuitton purse, they are “better” than the American that brought her purse at Ross. This same unwritten law goes the same for housing. A person living in Beverly Hills gets more respect or popularity than the person living in Compton, although the neighborhoods are not too far from one another. Respect and status is an important extension of the American culture; in Havana, status is not.

In Havana, clothes are not what defines a person or what gets them respect. Instead, it is the respect they have for others along with hard work that defines a Cuban. A Cuban is a Cuban, not rich, not poor, not black nor white, just Cuban.

I felt like I had seen it all and heard it all. Apparently not; I should have known this not to be true, it has only been four days. Today, I had the opportunity of visiting Hummel’s Alley along with some of my colleagues and our translator. On the way there, which seemed to take forever, we pushed through the Cuban humidity, skidded out on water, not by choice, but because everyone sold out. The first pit stop was the University of Havana’s soccer field, filled with young boys playing soccer, running around, being happy and carefree. One of the boys stopped ask for water. “Amiga,” he said, “agua?” Becca gave him the water, he went about his day and so did we.

After what seemed like hours, we made it to Hummel’s Alley. Let’s just say the energy was off; I still feel weird writing this. Upon arriving, there was lots of art, very beautiful art. African influence seemed to be some of the biggest influence for most of the pieces. After all, this was a place where Afro-Cuban religion is celebrated every Sunday. I was able to take a closer look at the paintings and hand sculptures and have them explained to me.

There was a chair that was in the center of the alley that brings good luck and good spirits to one. After being invited into a dungeon-like man cave, art was everywhere. Outside, most were paintings by Salvador Gonzalez, an artist that practiced Santeria. One of the friendly men that practice Santeria showed us a bracelet that represented a saint that protected street workers, kids and happened to be one of the richest gods of Santeria. After being offered to buy drinks, I declined; however, a colleague did not. He bought a Big Black. The Big Black was similar to a mojito, from David’s describing, just a little less sweet.

“Big Black, Grande Negro,” my interpreter says. “Big Nigga,” he mumbled shortly after and many times after that. Nigga is an extremely racist and unacceptable word in the United States that is used too often. However, after being told that racism does not exist in Cuba, hearing that term not only offended me but caught me by surprise. It was explained later to me that the word is not racist in Cuba, it is just the name of a drink or just a word in general.

Being that Cuba was once under control of a racist regime, where Afro Cubans were enslaved and may have faced discrimination, nigga being “just a word’ is hard to believe.

Big Nigga… I thought a Cuban was a Cuban.

‘’What is it like being an Afro Cuban?’’ I ask. “There is no such thing,” they respond, “we are just one.” Afro-Cuban culture, as rich and beautiful as it is, seems to not exist. It is not broadcasted, and in the cases that I have witnessed, not acknowledged. One of the biggest reasons for this trip to Havana was to understand the Afro-Cuban culture; the dance, the food, the people and the experiences, but I have since run into barriers. Black people in Cuba do not or cannot identify as such. I need to know why.

Socialism has taken the richness of culture away from black people. Cuba’s socialism is responsible for the disconnect between black people elsewhere in the world and in Cuba.

White supremacists in the United States are responsible for mass incarceration, inequalities in the school system, and many hate crimes amongst other things that oppress black people. The same country that was built by the free labor of African people on land that was stolen claims to be the land of the free has more people in prison than any other country in the world, mostly black people. Parts of the world like Africa are being exploited by post-colonizers, and people in other black countries are also being exploited by white people. Universally, Afro Latinos, Africans, African Americans, Haitians, Jamaicans and other black people can make a change for black people everywhere. Of course, this would come if all identified as one. However, no native languages, religions, and other things have separated Africans from identifying with one another. The same countries that are responsible for enslavement, murder and rape are the identities that are taken on by African people. Cuba has forced Afro Cubans to erase their Africanness. America has incarcerated, appropriated and white-washed Africanness as in other countries. Black identity is in one another. Black identity is history before slavery, not after.

We are one, we are not them.

The truth is all governments are bad. In some countries like Cuba, it is easy to blame the government for oppression by not having freedom of the press or elections in the government. Truth is, it is the same in the United States. It is the truth that people are able to write on personal blogs and social media bashing the government; “F*ck Trump” or “Dump Trump” are perfect examples, however, people never dump or boycott the people who put him in office. People seem to forget that America is not a democracy, America is a republic. When Americans think they are voting for their president, they are voting for an electoral college. They also seem to forget, or rather are not educated on the fact that the messages presidents send are not their words, but the words of the corporations paying them.

The media in the United States are controlled by a selected few but consumed by the masses. This gives them the power to spread their agendas and ideologies to everyone, even those not asking for it or passively consuming.

Cuba, of course, has been under the same control for generations and generations, yet they know who is doing the controlling. In America, presidents are the faces, not the sources.

My question is what is worse? The United States for making people believe they are free when they are not, or Cuba for bluntly letting their citizens know they’re under control?

I’d rather be told the truth even if it hurts. Americans are living their lives believing that they are free, believing they’re living in a democracy. They are constantly looking down on other countries ignoring issues such as mass incarceration, prison labor, unequal education, institutionalized racism and a long history of inequalities for people of color. America should fix its problems within before scrutinizing other governments.

There’s so much more

Although sixteen days in Cuba was enough time to breathe in an uncountable amount of chemicals, run from fumigation tanks, try good and bad food, and be called “my nigga” while walking through Old Havana, it was not enough time to fully emerge myself in the Afro-Cuban culture.

I am leaving Cuba with great love and appreciation for the Afro-Cuban community. Everywhere music was being played, or where art was being sold, I saw an influence from Africa. Also, everywhere I went I saw people who looked just like me, who also had the same roots. This created a connection that will not be broken and spread throughout the world amongst black people everywhere.

After being told that racism did not exist in Cuba, I found that to be untrue more and more through observations and experience. The first time was when my translator said “nigga,” and although it may be “OK” in Cuba, nigga is a racist term that is universally unacceptable when talking about anything black or pertaining to black people. The second time was when a mixed Afro Cuban whispered in my ear that there is racism in the hotels in Cuba. He said that the black women usually clean while the white or mixed Cubans work the front desk jobs. After asking for an interview with this gentlemen, I never heard from him again. This showed me there is a consciousness of racism and inequalities in socialist and communist Cuba. The people there, specifically the Afro Cubans, are forced to align their thoughts and beliefs with the masses in order to be a true Cuban and to have pride in their country.

The last sign of racism was not an act. While walking past a restaurant, a sign caught my eye that read “NO racism.” I thought a Cuban was just a Cuban? I was taught wrong obviously.

I scratched the surface of what I set out research, but there is so much more to learn. I cannot wait to go back!