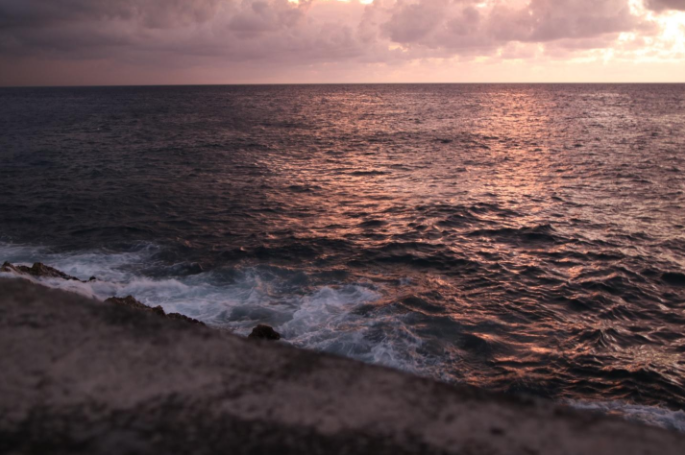 One minute we were hanging our clothes on the windowsill to dry, and the next minute the wind was throwing them across the floor. An hour of the clothes drying progress gone, but it was totally worth it. We wanted to go outside to experience the weather, but we could barely open the door to our room because the draft from the wind was so powerful. It took us a minute to realize we had to close the windows first. Clearly, we know nothing about environmental science.

The lobby was fuller than I’ve ever seen it, everyone standing under the awning, waiting for the weather to mellow out. I’m sure for the people trying to get home from work it was a nuisance, but for us it was exciting. The streets filled with water in no time, the spray from the cars aggressively shot up over the sidewalk. Even the lobby began to flood, and the hotel employees had to use mops to push the water back outside, which wasn’t very effective.

It actually really surprised me that the rain was so cold. It was refreshing after around six days of hot weather to experience the cold. I really wanted to run around in the puddles and take pictures, but unfortunately, cameras and water generally aren’t compatible.

Experiencing a tropical storm has been one of the more interesting experiences we’ve had so far. In California, any amount of rain has people thinking the apocalypse is upon us, but in Cuba crazy weather is the norm. We asked a girl in the lobby weather (ha ha, get it?) or not the Cuban people are afraid of storms, but she shrugged it off, saying they’re used to it.

Getting heckled in Havana

You know that feeling you get when you feel like someone is watching you? Multiply that feeling by a thousand and that’s exactly what it feels like to walk down the streets of Old Havana. Getting heckled by people is normal when you walk through a busy city, but for some reason, it’s infinitely worse in Havana. Every other minute someone will whistle or call out “pretty lady.” They are usually promoting some business, so I guess they think the cat-calling will help lure people to their store, but it really just drives people away. Every other Cuban custom has been amazing, but this is one that I could definitely do without.

Nothing is worse than when you’re minding your own business, enjoying the day, and then someone gets in your face, making you feel helpless. The biggest reason why I think this throws me off so much is how different it is from the United States. In the U.S., people tend to focus only on themselves and we all stay in our personal bubbles. In Cuba, everyone reacts to each other. This is probably partly due to the fact that in the US everyone is on their phones, but here there is nothing to do but be present in the moment.

I think another big reason why the heckling is so constant is that we very clearly look like tourists. We walk in groups a lot and carry large cameras. They see that we very clearly are not fully comfortable in this environment and use it to their advantage. Luckily we just move on and the heckling stops, but they are very verbally persistent. This is definitely something I wish I had been warned about before coming, so I could have worked on being more conspicuous, but it is also a great learning experience. It also definitely does not stop me from going out and doing as much as possible.

Today I had more interaction with the police than I have in my entire life. What started out as a picture taking excursion ended up being a lesson in Cuban life. We’ve often been shown the poor, run down Cuba in magazines and on the news, but there is also a completely different side to Cuba we don’t usually get to see. There is wealth here; there are people thriving and making money. Unfortunately, most of these people are communist government leaders.

We spent some time wandering the streets in a nicer neighborhood, taking pictures, when we were approached by a local who said we weren’t allowed to take pictures, and that if we were caught we may get our cameras confiscated. We saw a lot of police and security, who were obviously watching us pretty closely. It definitely gave me an eerie feeling, making it seem like we were doing something illegal. If I’m being honest, it was kind of thrilling. I felt a little like a foreign spy. What surprised me was that no one came up to ask if we could delete our pictures, so they apparently aren’t as strict about pictures as people make it seem.

What this experience taught me is that there is so much more to this country than we see in the media. This is the Cuba they don’t want us to see. It also reminds me a bit of our government in the United States. The government controls everything. The government is made of the powerful and the wealthy. Our political leaders don’t want people, especially foreigners, meddling in their affairs the same way that the Cuban government doesn’t want people meddling in theirs.

There’s also a lot of gray area in terms of what the people of Cuba want us to see. You can’t take pictures at a run-down fútbol stadium because they don’t want us to paint Cuba as a place of poverty. On the other hand, you also can’t take pictures of the extravagant places, because the other half of the population doesn’t want people to know that Cuba is also a prosperous place. It makes it very difficult to be a journalist, but it’s also part of the intrigue.

I’ve been back home for a little over 24 hours, and I can’t stop thinking about how much I miss the Malecón. The Malecón is a sea wall that stretches for over eight kilometers along the Cuban coast. It’s a place where people go to relax and socialize after a long, usually very hot, day. No matter what we were doing every day, we would walk the Malecón. It became a staple of daily life for us to spend hours hanging out around the Malecón and embracing the Cuban culture.

I think when I look back on my experience in Cuba, this place is what I will miss the most. I love seeing all the people just hanging out and enjoying themselves. I’ll miss watching the men with their fishing lines hooked up, waiting hours to see if they make a catch. I’ll miss the fact that while you’d think everyone would be looking out towards the ocean, everyone looks inward on the city. I’ll even miss the people with instruments who come up to you and serenade you in hopes of making a little cash.