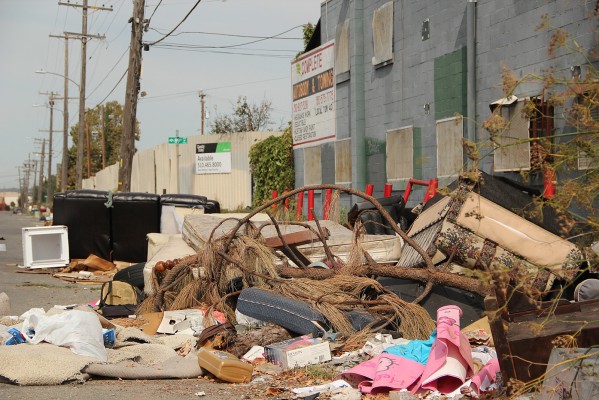 Illegal dumping has become a visible problem in Oakland, California. It is all too typical to pass by a pile of trash on a street corner. The city’s Public Works department eventually cleans up the area, but a few days after the cleanup, there is a new pile of trash. The city’s budget for 2016-2017 is $530 billion. Public Works gets only .5 percent of the budget. The agency that gets the most from the budget is the Oakland Police Department who get 41.1 percent.

Most of the people who dump their trash in Oakland do not reside in the city, according to Ken Houston, chair of the East Oakland Beautification Council, a volunteer-driven organization established in 2014 to end illegal dumping and graffiti in Oakland.

“The lack of leadership contributes to the ongoing problem of illegal dumping,” Houston said. He adopted the area of 69th Avenue to 106th Avenue along San Leandro Street in East Oakland, an area largely comprised of warehouses and residential neighborhoods. In this area, he picks up the trash that is dumped and erases the graffiti as well as patrols it for illegal dumping.

Houston ran for mayor of Oakland in 2014 on the platform to fix the illegal dumping problem, but current Oakland mayor Libby Schaaf won that election. He considers himself the son of Oakland because he was born and raised in Oakland. He knows the struggle of living in Oakland, so running for mayor was also about fighting for those who are in poverty across the city

According to Houston, Illegal graffiti and dumping are connected. “If someone can tag for 15 minutes, someone else can dump in less time,” he explained.

Houston keeps detailed records of each incident he encounters. His records include the location of the offense, the square footage of the trash or illegal graffiti, and cost of the clean up. He cleans the trash by himself or with volunteers. The cost of trash removal depend on the amount of trash, and the cost of graffiti removal depend on the square footage of the space taken up by the graffiti. If someone comes back to the same area, he will then report it to the police. He often goes on night patrol to try to stop illegal dumping. He patrols areas that he considers hot spots across East Oakland. If he sees someone illegally dumping, he reports it to the Oakland Police. “I am doing what the city is supposed to be doing,” said Houston. He said he either calls the police immediately or he takes down the license plate of the car and reports it after.

In a recent meeting between the Mayor Libby Schaaf and city residents, the mayor said she would do the best she can to combat illegal dumping and that she will go out and clean up with Public Works crews. She also wants those who get fines to pay them. If people do not pay the fines for illegally dumping, their car registration will be suspended. The mayor stated that the idea of suspending the car registrations, of those who are fined, came from residents themselves.

The city of Oakland has a Witness Reward Program, which attempts to fight littering by rewarding residents financially if they report to police an illegally dumping incident. The financial reward is half of the amount of the citation given. For example, if the citation is $500, the reward to the person who reported the crime would be $250.

The city also developed an app called SeeClickFix, which allows residents to take pictures and report it to the city. Public works will then pick up the trash from that location. Waste Management occasionally has free dumpsites across the city where  residents can throw away bulky items like mattresses.

The Oakland Police Department did not respond to the Pioneer’s attempts to arrange an interview.