The battle for Berkeley: Rally results in violent outbursts in East Bay 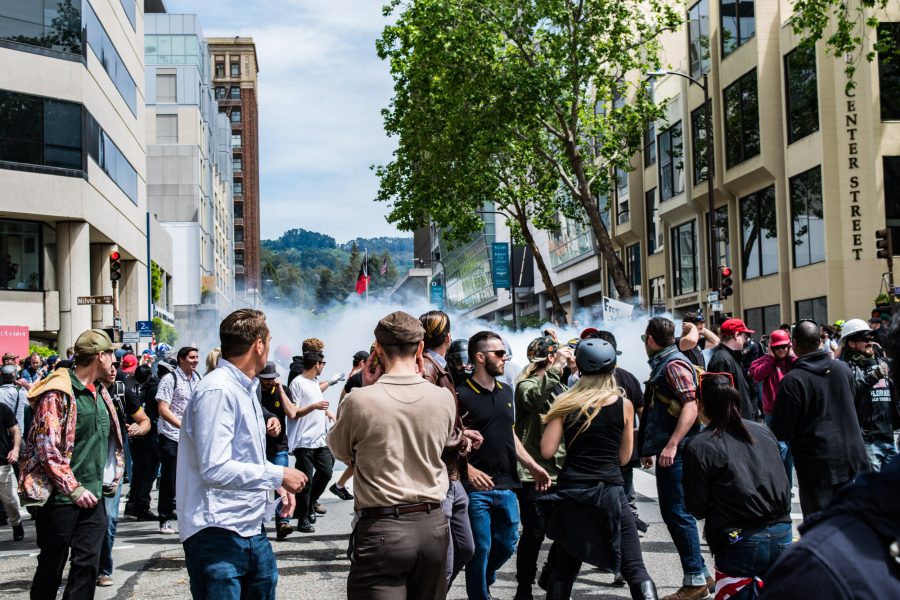 Downtown Berkeley erupted in chaos last Saturday at MLK Jr. Civic Center Park, less than half a mile from the UC Berkeley campus where students once fought to defend free speech in the 1960’s.

The Liberty Revival Alliance organized a “Patriot’s Day Free Speech Rally” on Saturday that was to feature Lauren Southern and other young Conservatives prominent on social media. to address “the importance of safeguarding the first amendment for all Americans,” they said in a video released on their YouTube page.

The Alliance is an ad hoc group organized by activist Rich Black, who was reportedly an organizer of a previous Alt-Right rally on March 4 in Berkeley, which also devolved into violence. Similar to the March 4 event, the original intent of Saturday’s gathering became lost in the crowd. You have probably seen the headlines — violence, arrests, weapons, and mayhem — but the real story of the “Battle for Berkeley” goes beyond the headlines. Here’s my story.

It started when a sound system on the back of an Antifa — Anti-Fascism — bicycle played the song “Fuck Donald Trump” by YG & Nipsey Hussle next to the park. Applause and cheers erupted from the clearly left-wing side of the park, as the crowd converged to rally around their newfound anthem.

The ring-wing members of the crowd, identified by their red “Make America Great Again” hats, pushed up against orange barriers erected along the park perimeter and matched the intensity of counter-demonstrators. Air horns blared from both sides of the crowd as megaphones sung out to the rhythmic sounds of news helicopters above.

An explosion 20 feet behind me left my ears ringing and my heart pounding. For a moment there were no shouts, no air horns – the helicopter circling above even seemed to stand still – followed quickly by screams and confusion.

A man near me frantically spun his head before running to a woman, pleading through a shaky voice, “If you see anything come in, you get down, OK?! Get. Down.” His instructions were met with the crackling of a lit fuse and a thin trail of smoke falling from above. Another man leapt away as it exploded in a cloud of smoke.

After 30 minutes of escalating tension, the crowd circled around the park to Center Street on the north side, exchanging words across the barrier as they went. “I’d like us to come together, I’d like that very much,” said an elderly man with a handlebar mustache, leaning on his cane from inside the barrier. A man singing songs and playing a guitar then fist-bumped the elderly man from across the barrier.

The friendly exchanges were short lived. Antifa protesters in black masks began pulling fist-sized rocks from behind a hedgerow near the park. A woman pushed me away as I pulled my camera up for a shot. “Don’t film this, you don’t want to film this, just go,” she pleaded.

The tone of her voice was more concerned than distrustful of me or my camera, and I left the area only to watch those same rocks hurled high in the air, their arrival signaled by loud gasps. “Oh shit! She just got hit in the face!” said a man standing with me on a ledge overlooking the crowd.

As the clash moved up the block to the intersection of Milvia and Center, a trash bin was turned over and lit on fire. I knelt down to capture the scene. My face burned. All I could do was run. My heart raced. My eyes stung. I could barely see. A few hundred feet later, I checked my reflection in a window. I looked fine, but my skin felt like it was on fire.

I was told that M80 firecrackers had been wrapped with mace powder, a plausible explanation given the instant burn I felt which persisted for a few more hours. It served as a constant reminder of just how bad things could get.

Minutes later — with no police near the intersection — a smoke grenade from the Antifa side was thrown into the center of the mob. It spun in the air as it fell and filled the block with smoke. After a few moments of confusion, a mob from the right-wing side of the crowd charged through the smoke and pushed the protest to the intersection of Center and Shattuck.

With the line between opposing groups now indistinct, a man slammed a woman into a wall among a mixed crowd. Bystanders quickly jumped in and separated them as another man shouted, “Let her go!” The assailant responded, “What do you mean let her go? She has a weapon!”

The crowd once again split into opposing sides as confused drivers looked for a way out and pedestrians dodged the chaotic intersection. Heated words led to fists and shoves. “Keep the peace, cowards,” said a man from a megaphone, before being jumped by several demonstrators.

“Get the hat!” someone shouted as the man and his megaphone disappeared in a sea of bodies as his red hat was ejected from the pile. Moments later, I heard my name called over a megaphone behind me. “Mat Weber, turn around,” the voice said, and I saw my best friend of 15 years. He described how his red San Francisco 49ers hat was taken when he was tackled in the crowd.

I was confused and surprised to see him, completely unaware he was there that day. That’s when it hit me: I had just watched my best friend disappear into that sea of bodies. I was so entranced with my camera, the ringing in my ears, and my still burning face that I didn’t even recognize my best friend who had only been three feet away.

After almost two hours of shouts and sporadic fights, Berkeley Police moved into the intersection and arrested one man as a pedestrian took a selfie. The crowd then followed the police as they grabbed a woman and retreated towards the civic center, before forming a line and forcing protesters onto the sidewalks.

Nearly three hours after the improvised grenade peppered my face, the crowd of roughly 50 was now tiny compared to the mass of bodies which earlier circled the MLK Civic Center Park. Police kept the road clear for another 10 minutes before police vans pulled onto the street and paused, as officers filed in and removed their helmets.

Shortly after the police left, I spotted my friend from earlier standing on the corner, and we walked across the street to a bench on Shattuck Avenue after agreeing the protest had fizzled out. Our unexpected meeting led me to the realization that I had fallen into the same trap I watched all day.

In all of the blood, violence, mischief, and mayhem, I had forgotten that most in the crowd were not extremists in black masks or fascists in red hats. They were just people, not solely defined by their ideology or the actions of a few among them.

Exhausted, my face still burning from mace, nerves frazzled from dodging rocks, explosives, bottles, and fists, I talked with my friend. We caught up with each others lives and watched as the people of downtown Berkeley went back to theirs.