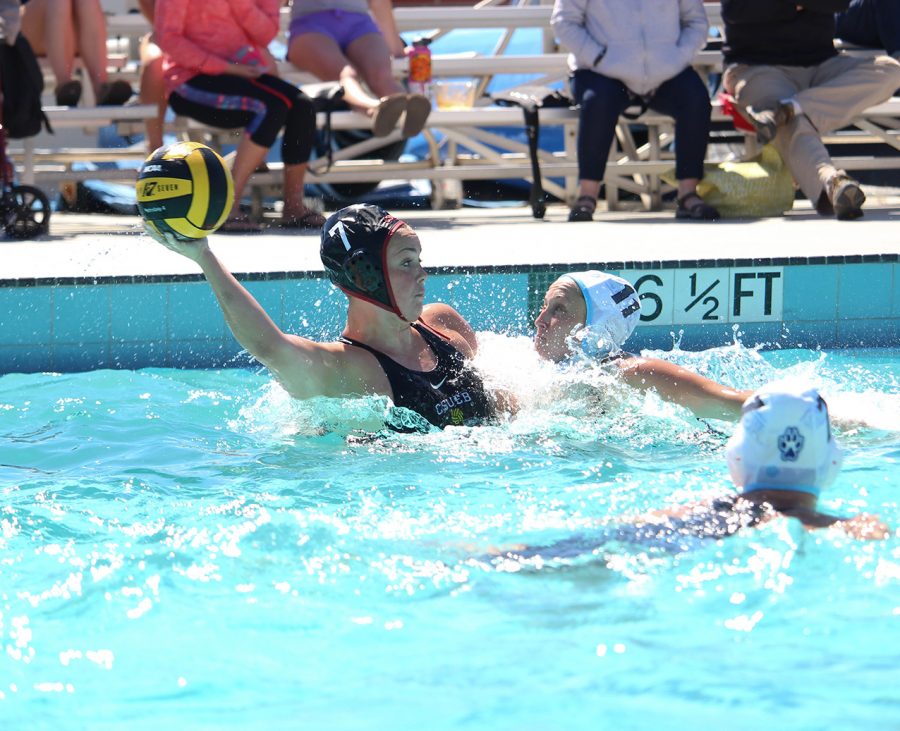 On Friday, the Pioneers went head to head against Sonoma (7-16 overall, 0-1 conference) in the Hayward campus Pioneer Pool. East Bay won their previous matchup against the Seawolves 8-6, during the UC San Diego Triton Invitational on Feb. 12, but this time around Sonoma got the upper hand on the Pioneers.

“We have to keep working hard, and continue to do our homework,” junior utility player Alicia Tully said. “We have been working on staying positive and I think we have the aspect down, we just have to keep going and hope the positive energy translates.”

Sonoma got on the board first when sophomore driver Taylor Brown, scored an unassisted goal in the first minute of the first period.

Shortly after East Bay responded with two goals by senior driver Nicole Williams and senior two-meter Olivia Mackell. The two teams attacked each other on offense with power and aggression, and neither team allowed the lead to go over 2 points.

The Seawolves scored another goal after Williams’ and Mackell’s goals and it gave them the lead 3-2 as they headed into the second period.

In the second quarter both East Bay and Sonoma scored 3 goals a piece, but Sonoma continued to stay ahead, as they led 6-5.

The third period was a completely different story, though. The Pioneers gained momentum in the period and outscored the Seawolves 4-1. Senior utility player Brandi Carroll was assisted by freshman utility player Auriel Bill and scored in the first 14 seconds of the period to tie the game 6-6.

Carroll scored another goal in the quarter, as so did sophomore driver Cheyanne Brady and Mackell, to put East Bay ahead 9-7, as they headed into the final period of the game.

Sonoma came alive on offense and did exactly what the Pioneers did to them in the third period by outscoring East Bay 4-1. Sonoma’s senior utility player Carleigh Robinson was crucial in the contest down the stretch as she scored 3 of the 4 Seawolves’ final goals.

Robinson was unstoppable throughout the last minutes of the game. Every single one of her goals were unassisted including her game winner which came with 55 seconds left in the match.

Sonoma was able to outlast the Pioneers, and went home with the win, 11-10.

“We have to communicate more on the defensive end or it will be the death of us,” Carroll said.

Carroll led the team in goals with 3, followed by Mackell with 2. Goalkeeper Makenna Nation played the full game and had 10 saves and 2 steals.

East Bay is now 10-12 overall and 1-1 in conference. They play their second to last regular season game, which is also the final home game for their six seniors on Saturday versus California State Monterey Bay (6-9 overall, 0-2 conference) at Pioneer Pool.