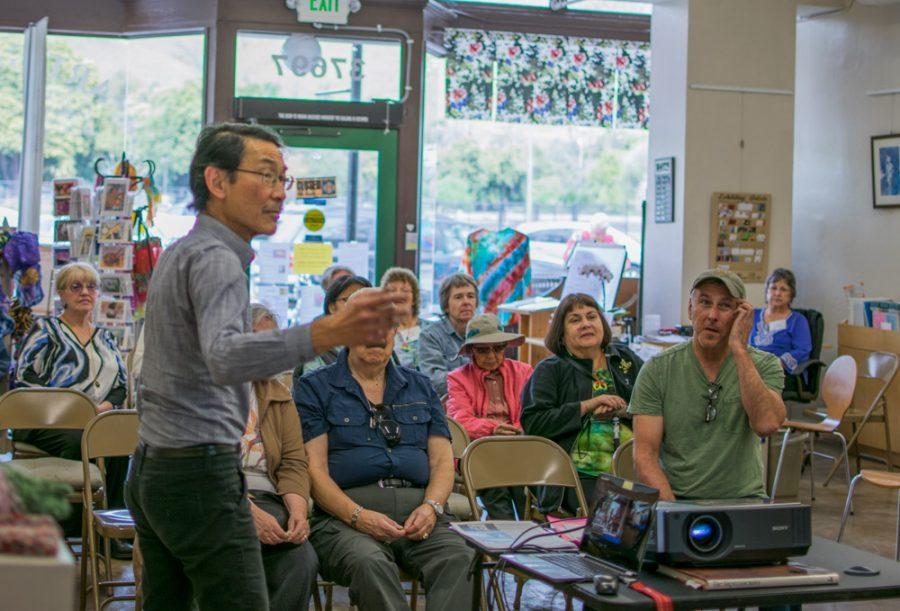 On March 19, the Fremont Art Association—in partnership with Dr. Sharat Lin of the San Jose Peace and Justice Center—hosted a special event at their gallery in the Niles district of Fremont to commemorate their Art of Protest exhibit.

In a presentation at the event, organizers examined the historical context and significance of a set of 22 original silkscreen protest posters produced for college campus movements in the 1960s and ‘70s. On display in the gallery throughout February and March, the posters were chosen by Lin from a collection of 26 originals, most of which he acquired as a student at UC Santa Cruz and UC Berkeley in the ‘60s and ‘70s. After an event had passed, he would find a poster in good condition and add it to his collection.

“Art is a way of escaping from the world, and yet, protest art is a way of making art powerful in the world,” Denny Stein, president of the Fremont Art Association, said at the event.

The posters were not intended to be preserved, as they were printed on inexpensive paper and generally for a specific event on college campuses, Lin said.

The exhibit was hosted alongside a larger event that honored the Nobel Prize-winning songwriter Bob Dylan, who has produced numerous protest songs. While not on the same platform as the work of Dylan, the posters represent their own power and passion, according to Lin. “What gets people out in the streets is not simply their beliefs, but a passion that has excited them,” Lin said.

The 1960s and 70s represent a time for many in which people protested and exhibited strong passions about social issues such as Civil Rights, the Vietnam War, the President Richard Nixon administration, and the Black Panther movement, according to Lin. These passions were prevalent on college campuses across the country, and the artwork provides a record of the protests led by students.

Many of the posters were produced for specific purposes and required little context to communicate their meaning, Lin said. One such poster displayed at UC Santa Cruz was examined during the presentation because of its few words.

“It doesn’t need to say much, it is only intended for use on campus,” noted Lin. The poster had only the day of the week, next Thursday, a three word description, a time, and a location, the Quarry. The location is one word, and according to Lin, “every student on campus knows what the quarry is. That’s all you need.”

The contextual nature of the posters resonated with Matt Levy, 52, of Fremont, who said he passed by and decided to check out the gallery.

“I walked in and saw these old protest posters, and I saw one that said ‘Quarry’ and immediately thought, ‘UC Santa Cruz Quarry?’” said Levy. The posters were made over a decade before Levy went to school at UCSC, but he was struck by the fact they were made by alumni of his alma mater.

For Ron Cueba, 69, of San Jose, a retired history teacher, the connection is closer to home.

“I remember the war protests very vividly,” Cueba said, recalling his time in the military reserves and the friends he lost in Vietnam, a “really bad chapter in American history” that Cueba believes parallels the invasion of Iraq, where his son was wounded while serving in the military. “We lost a lot of kids. For what? A mistake? It was just plain stupid.”

Lin views protests as a “last resort” for times when the system doesn’t respond to what people think is right. “It is said that one person can make a difference, but the real difference is made by a lot of people working together,” he said.

When it comes to protest, Lin sees students as having always been “at the leading edge, and not just because of their idealism,” said Lin. “They know in their hearts when something is wrong.” In his view, the best path forward for social change is one, which combines the experience of the older generation with the passion of youth.

The exhibit, which ends its run at the Fremont Art Association Gallery tomorrow, is available for viewing online through the King Library Digital Collection courtesy of San Jose State University, at http://digitalcollections.sjlibrary.org/.