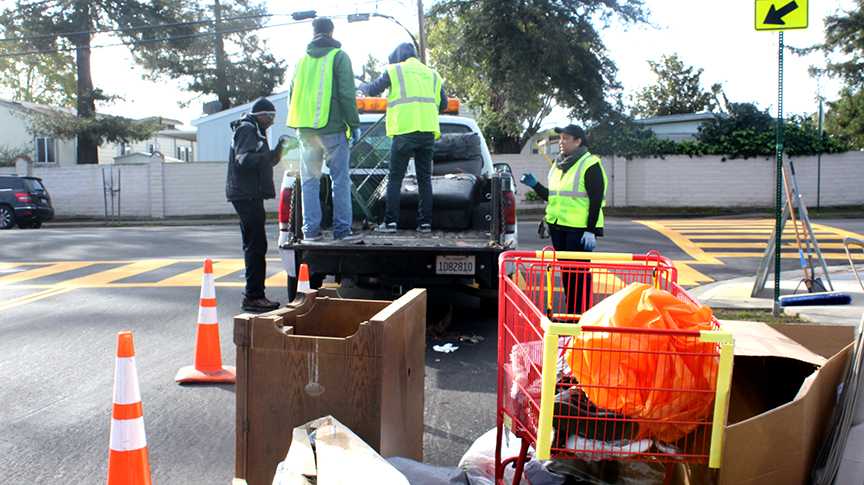 Jillian Hogan moved from San Jose to Hayward three years ago to be closer to her job in San Leandro. But she quickly noticed lots of fast food bags, chips and other garbage floating around in her neighborhood. “It’s kinda windy out here so the stuff would blow into my front yard,” Hogan said.

Hogan, 35, grew up recycling — she describes her parents as hippies — and she studied environmental studies at San Jose State University. She currently works as an environmental compliance manager at Alameda County Industries, an East Bay recycling organization. Hogan often picks up trash while walking her dogs whenever she sees it blowing around.

Hogan is the co-chair of the Keep Hayward Clean and Green Task Force, which hosted its monthly clean up event for Hayward residents on Feb. 25. The task force program was created in 2007 by former Hayward Mayor Mike Sweeney, after he had heard complaints about the litter from residents. He had also noticed the problem firsthand while driving through Hayward.

“Most of the problem came from us, the people that live here, and the solution needed to come from us [Hayward residents],” Sweeney said at the Feb. 25 event. “So my idea was to create a group of people who would lead by example, by getting out there and being workers and showing people what you could do.”

Hogan joined the task force in November 2015. After two years as a regular member, Hogan became co-chair, so she now oversees cleanups and runs monthly meetings at Hayward City Hall. According to the Hayward City website, the task force has collected approximately 522 cubic yards of trash since 2010.

“[We’re] going into all these different neighborhoods and engaging the community, like hey look it, we collected all this in one spot,” Hogan said. “We can just look at it at the end of the day and calculate how much we collected. It really opens your eyes to the problem in the city.”

The sun peeked out of the early morning gray skies on Feb. 25, as residents made their way towards the Task Force table at Ruus Park — a small park located in the middle of a quiet neighborhood — where roughly 10 people in bright yellow safety vests with blue trash bags and trash grabbers at hand, collected broken glass bottles, cigarette butts and used napkins throughout the neighborhood. City waste management takes collected trash to the city yard and cans are donated to the homeless, according to task force member Blytha A. Bowers.

The task force established programs such as Adopt-a-Block, where anyone such as schools, organizations, neighborhood families or individually, can voluntarily adopt a block in Hayward and keep it clean at least four times a year, in effort to keep Hayward clean consistently.

Participants such as Hayward Mayor Barbara Halliday her husband Rick Imsdahl, who have lived in Hayward for 32 years, have taken part of the Adopt-a-Block program twice. “Ten years ago, we would go to some places where there would be years worth of piled up trash,” Halliday said. “I wish we could get people to think about it more when they drop their McDonald’s meals or whatever on the street. Instead just taking it to their homes and putting it [in their] trash.”

Local Hayward resident and Cal State East Bay sociology alumni Charlene May walked to the event with her two sons, who are seven and 10 years old. They collected more than 100 cigarette butts, paper items such as fast food napkins and paper bags and broken glass alcohol bottles for almost three hours.

“I feel honored to be able to pick up trash because I feel honored everyday I wake up,” said May. “So for me, it’s just about being grateful where you are, and being excited about where you like to go. I like to see people forward-thinking, just doing things and not just sitting back, licking their wounds, talking about what they can’t accomplish.”