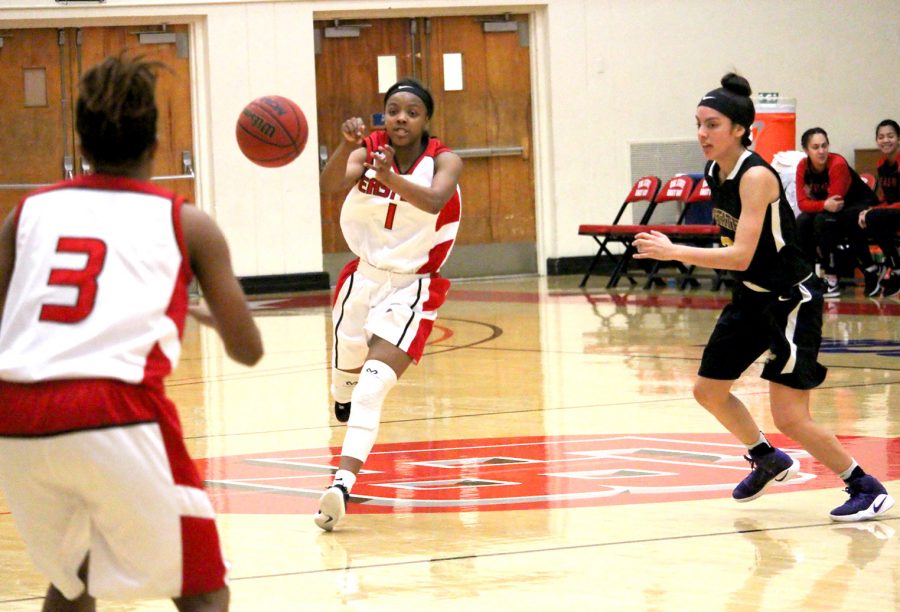 The California State East Bay women’s basketball team made the most of homecoming weekend.

The team defeated both of their opponents; Sonoma State and San Francisco State in what their eleventh win in their last 13 games, and initiated a three-game win streak.

East Bay has been on a roll and left their imprint on the California Collegiate Athletic Association Conference as one of the best teams, if not the best. The team is now ranked second in the conference with a record of 16-8 overall and 13-4 in CCAA games, but recently beat top-ranked UC San Diego (18-5, 14-3) 71-57 on Feb. 4.

“Being second is a great feeling, especially in this league, but we want more,” senior guard Shomari Harris told the Pioneer. “We do not just stop here, we have to keep our focus.”

On Friday the team faced Sonoma State (11-11,7-9). After the first half the Pioneers trailed by one point, but continued to play their style going into the second half.

This game was much more competitive than the first matchup East Bay had versus Sonoma on Dec. 31 when the Pioneers won 63-46. Sonoma showed resilience against a strong East Bay team, but it was not enough.

Sophomore forward Morgan Greene and Harris were the key to the Pioneers’ win. Green earned a double-double with 14 points, 12 rebounds and contributed to East Bay’s control in the paint as they out-rebounded Sonoma 38-26.

“I have to leave everything on the floor and play my hardest,” Greene said. “It was hard redshirting last year, so I vowed this year to not hold back.”

Harris added 12 points and 5 assists in the victory as well.

San Francisco is ranked last in the CCAA, but put up a good fight against the Pioneers and made the final homecoming game a close contest.

The women outscored the Gators in every quarter of the game, but in the third quarter San Francisco managed to get the score within two points but East Bay showed no signs of folding. East Bay responded with a 9-0 run and maintained control and a lead for the rest of the game.

East Bay won 60-50 and completed the sweep for the weekend and a sweep against the Gators this season.

Harris had another double-figure game with 17 points and went 7-for-15 from the floor. Senior center Remy Puou also had chipped in with 17 points, 14 rebounds and Greene added 15 rebounds of her own.

“Every game I play, I am going to to go after the ball overtime I possibly can,” said Greene. “I feel I can out jump anybody on the court and I know how important second chance points are for us.”

The Pioneers already earned their ticket to the CCAA postseason tournament, but they still have conference games to play. The team will travel to Southern California to face California State San Marcos (12-9, 9-7) on Friday at 5:30 p.m. in their last CCAA road game.