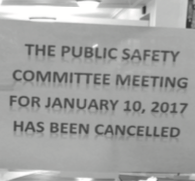 Gunfire shut down an Oakland City Hall meeting at 3 p.m. on Tuesday, and all meetings were cancelled for the evening as police set up barricades around the one block crime scene.

The Oakland Redevelopment Successor Agency and Economic Development Committee was nearly an hour into a meeting when vice mayor Annie Campbell Washington paused and asked, “What is that? Is that gunfire? Are you serious?”

She left the meeting interrupting the decision to postpone a meeting to a later date and the meeting ended shortly after.

Cal State East Bay journalism students covering the meeting heard multiple gunshots and security escorted everybody out of the building.

The shooting took place on 13th and Broadway right outside of Oakland City Hall, and Oakland police found one male suffering from non-fatal injuries, according to an Oakland Police Department report and witnesses.

The victim was sitting in a bus shelter when he was shot.

He then ran down the block to De Lauer’s Super Newsstand and EMS was called, according to The East Bay Times.

The crime is still under investigation, and no suspect or motive has been identified yet, according to OPD. This is one of 109 reported violent crimes in Oakland that took place during the first weeks of 2017 alone, according to the online weekly crime report by OPD.