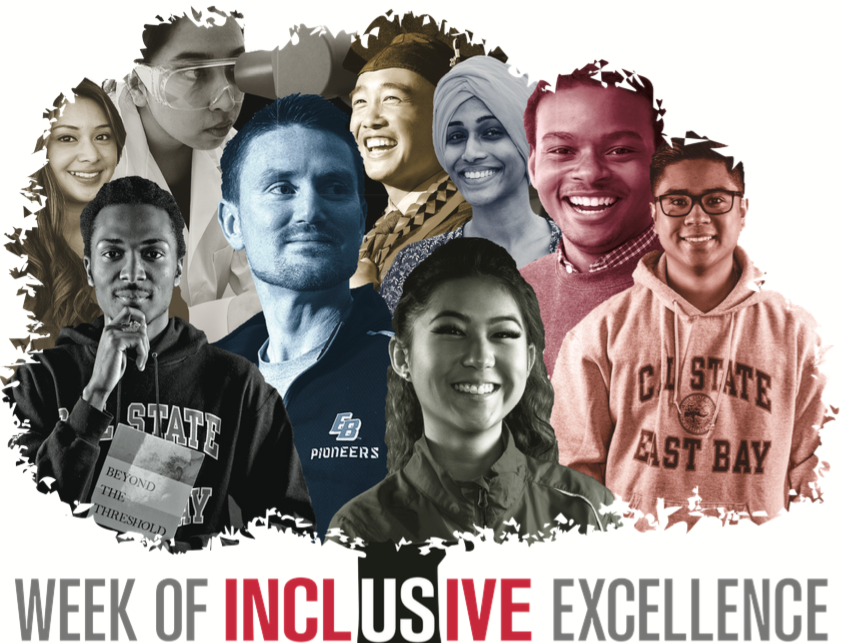 Graphic Courtesy of Office of Diversity, Leadership and Employee Wellness

A version of a flyer from the Office of Diversity, Leadership and Employee Wellness.

Last month, The Wall Street Journal ranked CSUEB the 4th most diverse college in the West. Because it is one of the most racially diverse schools in the nation, University Diversity Officer Diana Rush Woods thinks it is important for students and faculty to be informed about their peers’ ethnic backgrounds and broaden their knowledge outside the “Californian bubble.”

With this in mind, Cal State East Bay will host its 4th annual “Week of Inclusive Excellence” to promote diversity, social justice and equality from Jan. 17 to Jan. 20.

The weeklong series of events was launched in 2013 and is part of Cal State East Bay’s effort to create and maintain an environment of justice, tolerance, equality and nondiscrimination, according to the university’s Office of Academic Affairs.

The week will kick off with a southern-style breakfast in honor of Martin Luther King Jr.’s birthday, Jan. 15. “His view of embracing diversity… about people coming together, living together, working together and learning together…we think that’s important, it represents our campus,” Woods said.

After a Christian prayer led by ASI Program Coordinator Marc Cochcran, guests will be treated to a breakfast of chicken sausage, eggs, water, coffee, tea and vegan and vegetarian options served through Aramark.

East Bay’s President Leroy M. Morishita will then share the results of the 2016 Climate Change Survey, an anonymous survey that was sent to students and faculty in October 2016 to assess East Bay’s institutional climate, inclusion, current attitudes and workplace issues, according to previous Pioneer coverage.

East Bay’s choir will perform and guest speakers such as Alex Baker—case management coordinator at the Student Health and Counseling Services center—will talk about Pioneer H.O.P.E. (Helping Our Pioneers Excel), a new campus initiative that aims to reduce student food insecurity and homelessness. A lunch of chicken, beef and veggie burritos will also be provided at noon.

Other presenters will include professors, authors and artists who have published work or researched social justice issues. “I want folks to have an exposure to different thinkers, writers, thoughts [and] have discussions,” said Woods

During fall term, freshmen at East Bay were required to read author Jose Angel N.’s autobiography, “Illegal: Immigrant Reflections of an Undocumented Immigrant” in which he refutes stereotypes of undocumented immigrants as free-loaders that have little opportunities for advancement. On Wednesday Jan. 18, Angel N. will make a guest appearance to talk about the book and debunk stereotypes of immigrants. A separate event will be held for freshmen students only.

“I want folks to walk and say ‘that person is like me,’” said Woods. “I want people to go to their own words and say ‘gosh I feel that way too’ or ‘I have no idea that people felt that way.’ I want it to be an eye-opening experience and deepen the knowledge of different folks in the world.”

A student-led panel will take place on Jan.17 to discuss how Asian Pacific Islanders, who consist of 50 different ethnic groups and speak over 200 languages, feel underrepresented on campus. According to CSUEB, one in every four East Bay students identify as Asian Pacific Islander and feels this way.

“To be able to listen to student panels and hear these different voices brings tears to my eyes every year, because it’s like folks walk around feeling like they aren’t heard or seen and inclusivity is saying, ‘we see you, we hear you, we wanna see and hear you,’” said Woods.

To attend events within the Week of Inclusive Excellence, students must RSVP through Bay Sync.