49ers are more rust than gold 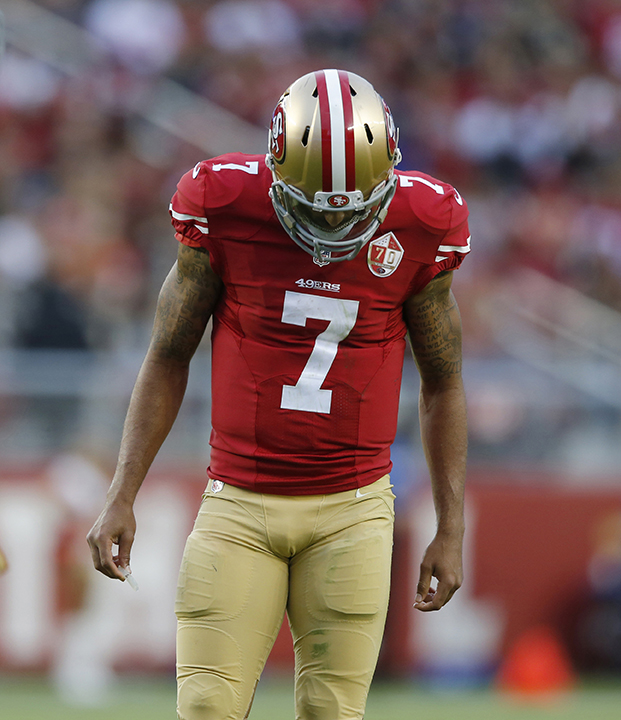 Halfway through the football season, the San Francisco 49ers are struggling to keep it together. Bad coaching decisions and sub-par performances on the field have likely sabotaged any chance the Niners of making it to the playoffs.

After starting the season off with one win, the 49ers have dropped the last six straight. On Oct. 23, the 49ers lost 34-17 to the Tampa Bay Buccaneers, an inexperienced team that is only 3-4. San Francisco needs to beat teams like Tampa Bay if they want to have a chance to save the season.

With week nine coming up, the 49ers need to start making a turn for the better if they want to try and sneak into the Wild Card Game. San Francisco is currently in second-to-last place in the league with a 1-7 record. They have to win at least seven of their last nine games to even have a chance at a Wild Card berth. It will take nothing short of a complete 180-degree turn for them to make the playoffs, but many things are holding them back.

Head coach Chip Kelly’s decision-making has been called into question several times this season while leading the 49ers. He has been repeatedly questioned about the starting quarterback position: Kelly began the season with Blaine Gabbert as the starting quarterback, and his less-than-stellar play has shown no signs of improvement. Gabbert, the former first-round draft pick, comes into the halfway point of the season with a 1-4 record, a completion percentage of 58, 890 passing yards, five touchdowns and six interceptions. These poor numbers have recently earned him the backup role and Colin Kaepernick has moved to the starting role.

Kaepernick began the season as the backup quarterback, and his stats as a starter are not much better. He comes in with a completion percentage of 52, 728 yards, four touchdowns and two interceptions. Although Kaepernick has only started three games this season and is 0-3, his stats are similar to Gabbert’s.

Currently the 49ers are ranked 30th in the league out of 32 teams. We all know the famous quote “Defense wins Championships,” but team defense is a big problem San Francisco needs to fix. Shutting down the other team’s offense is huge, and in order to do that the Niners need to tackle better, cover receivers better and stop teams from running the ball: all things they struggle with. Remember when Seattle crushed Denver 43-8 in Super Bowl XLVIII in 2014? That was largely due to how well Seattle’s defense played that night. Defense is surely one area 49er coaches addressed during the bye week two weeks ago.

Offense is an even bigger area of concern for San Francisco; their offense is ranked dead last so far this year thanks to an inability to pass or run the ball consistently.

In addition to their bad play on the field, the San Francisco 49ers have been voted the worst franchise in sports at the moment, in a recent poll last month from ESPN. Out of the four major sports in the United States — football, baseball, basketball and hockey — the 49ers were ranked 122 out of 122 teams. The storied franchise has been dropping in the ranking for quite some time now. According to the standings, which are based on a combination of calculations and fan voting, the Niners have the worst fan relations of any team in the United States.

Other notable rankings include finishing 118th in ownership, 113th in coaching, 116th in players, 117th in affordability, 105th in stadium experience and 113th in “bang for buck.” Sports broadcast KNBR reported on an ESPN ranking of all professional sports teams. This once storied franchise’s collapse is the biggest in sports history.