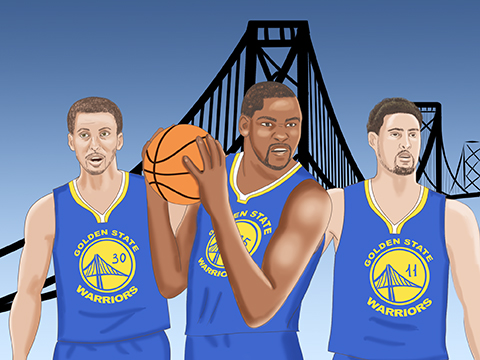 The Golden State Warriors got off to an unexpected start in their regular season opener last Tuesday.

The team fell to the San Antonio Spurs in the opener, 129-100. Many were shocked, because with the addition of Kevin Durant the Warriors seemed unstoppable, but even with a former MVP and the reigning one on your team, you can still lose.

Point guard Stephen Curry went 9-18 shooting in the game, scoring 26 points with four assists in 34 minutes. Small forward Kevin Durant scored 27 points on 11-18 for shooting and added ten rebounds in 37 minutes. But that was not enough for the Warriors to outlast the Spurs.

The Warriors bench scored a total of only 16 points in comparison to the Spurs bench, that scored a total of 54 points. San Antonio seemed to make no mistakes the entire game, and they capitalized off of every Warrior mistake.

“We could not find a rhythm,” Warriors head coach Steve Kerr told reporters following the game. “Our guys were embarrassed tonight; I know I was.”

In the first quarter, the Warriors led 16-2 and it looked as if it would be another home win, but the Spurs went on a 19-4 run and never looked back. Every time the Warriors made any type of progression, the Spurs responded. They went into the second half leading by 18 points. Oracle Arena, nicknamed Roaracle, was quieter than usual, fans shocked by the fact their team was down by this much.

As the team went into the second half, Golden State came out strong at the start with a 6-0 run and closed the lead, but the Spurs bit right back. They took control and extended the lead by 20 and led for the rest of the game, giving the Warriors no chance.

“[The] guys may have been a little anxious,” said Durant to reporters after the game. “We calmed down a bit to start the second half, but they were already ahead and we can not wait to play good basketball. We definitely have to get better.”

Golden State was outrebounded 55-35 and went 7-33 from the 3-point line, which was a huge factor in the loss. “Our offense was not clicking,” shooting guard Klay Thompson told reporters after the game. “Three pointers were not falling. I was lazy, was not really getting after those loose balls like I should have. I got to play with more edge.”

The Spurs really played as a unit, even with the recent loss of future Hall of Famer Tim Duncan to retirement. Power forward and center LaMarcus Aldridge had 26 points and 14 rebounds and shooting forward Jonathan Simmons scored 20 points off of the bench. But the key factor for the Spurs was shooting forward Kawhi Leonard who lead all players in scoring with 35 points (10-21 field goals, 15-15 free throws) in 32 minutes.

The Warriors looked to move on a focus on their next two games later in the week against the New Orleans Hornets and Phoenix Suns, in which they seemed to mesh a lot more.

Friday, they defeated the Hornets 122-114, despite Anthony Davis’ 45 points. The team played much more as a unit, with Durant scoring 30 points, Curry, 23 and Thompson, 28. The Warriors bench still did not show up, but they managed to pull out the win.

“It is hard to say how fast things will click entirely, but it is good to get the win,” Curry told reporters after the game. “We have a strong identity and focus.”

The Warriors look to continue the momentum and get a rhythm going against the Oklahoma City Thunder today, which will be the first time Durant plays against his former team.