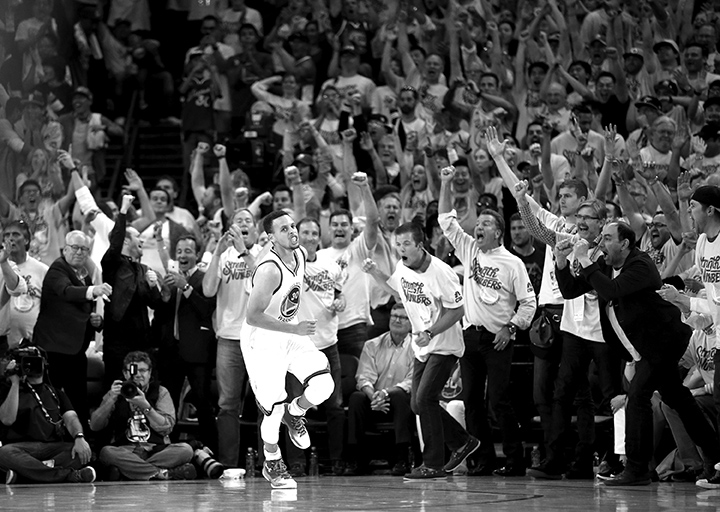 The Golden State Warriors’ 2016-17 basketball season started with a 97-93 pre-season loss on Oct. 1 against the Toronto Raptors in Toronto.

The rest of the NBA might want to play the Warriors early this year before they come together as this team. They are loaded with talent and seem determined to avenge the disappointment of last year’s NBA Finals loss to the Cleveland Cavaliers. There will be no 73 record-setting wins this year or an unbelievable 24-0 start, which will be a good thing. A lot of energy went into the undefeated streak to begin the year.

The team set out to beat the 72-10 record held by the 1995-1996 Chicago Bulls, who had the most regular season wins in an NBA season. The Warriors answered with a 73-9 performance, one better than the 72-10 mark posted by the Bulls.

Once the playoffs started last season, the constant attention they received and the physical abuse they put themselves through to get to that point may have been their downfall. Forward Draymond Green stated during Warriors media day on Sept. 26, that he doesn’t want to chase that record again because of the stress and strain they put themselves under.

Although they defeated Kevin Durant’s Oklahoma City Thunder in the Western Conference Finals, the Thunder made them work much harder than anyone imagined. The Warriors came back from a 3-1 deficit to ultimately win the series 4-3, but they burned themselves out in the process.

Then when they went up 3-1 on the Cavs in the Finals, they may have thought it was over, but Green got suspended and they blew the series to the Lebron James-led team that made history for Cleveland, capturing their first championship.

Most teams would have stayed the same and prepared for another run at a title. With team owner Joe Lacob at the helm, the Warriors instead went all in and went after the top free agent on the market, Durant, and signed him to a two-year deal worth $54.3 million.

As high as that number is, consider that Warrior forward Harrison Barnes signed a $94 million deal for four years with the Dallas Mavericks for an average of $23.5 million per year. For an extra $4.5 million, the Warriors get 16 points more per game as Durant averaged 28.2 compared to Barnes 11.7, and one of the top five players in the league.

With praise also comes criticism, and several former NBA players thought Durant came to the Bay Area for the wrong reasons. Most notably, NBA Hall of Famer and NBA analyst Charles Barkley said after the signing, “Kevin Durant is trying to cheat his way into a championship.”

Barkley forgot about how he worked a deal to get himself traded to the Houston Rockets from the Phoenix Suns, when the Rockets won multiple titles in the 1990s, as did Lebron James when he went to Miami and took his “talents to South Beach” in 2010.

The Warriors also signed Zaza Pachulia, a free agent center. His numbers are better than the departing Andrew Bogut’s, who signed with the Dallas Mavericks. Pachulia’s numbers, 9.4 points, 8.6 rebounds, are much better than Bogut’s 5.4 points, 7 rebounds and he shoots 75 percent from the free throw line compared to Bogut’s 48 percent. There will be no “Hack-a-Zaza” as there was back in the day.

The “Hack-a-Shaq” was a technique when teams would foul Shaquille O’Neal of the Los Angeles Lakers at the end of the game to get him to shoot free throws, since his chance of hitting one was 52.7 percent for his career.

Just like that, a team that won 73 games and went to the NBA Finals. The last two years improved their starting lineup by significantly. That is the key factor that will be the driving force this season for the squad and a bitter pill for the rest of the NBA to swallow.

The rest of the team is rock solid and they might have a better bench than they had last year, which carried the mantra “Strength in Numbers.” They lost forwards Leandro Barbosa, Mo Speights and center Festus Ezili, along with Bogut and Barnes.

However, they signed a solid big man in forward, David West from the San Antonio Spurs to go along with returning Warriors forward Andre Igoudala, guard Sean Livingston, forward James Michael Macadoo and forward Kevon Looney. They also picked up center Damian Jones from Vanderbilt in the first round of the 2016 NBA Draft and versatile guard Patrick McCaw from UNLV in the second round, which adds a ton of youth. The bottom line is that the Warriors are going to be the most-watched team in the sports this NBA season because of their recent success and the superstar status of Stephen Curry.

Once the players get used to each other, no team will want to face them in the playoffs because of how dominating they will be by the end of the year.

This year the goal for the Warriors will be to win lock up the number one seed in the playoffs so that they have home court advantage throughout the at Oracle Arena, one of the loudest venues in all professional sports

Look for them to rest their star players this year in strategic times of their schedules like Gregg Popovich does as coach of the San Antonio Spurs. Popovich has a history of resting his star players like Tony Parker, Manu Ginobili, Kawhi Leonard and the now-retired Tim Duncan to give them physical breaks over the grueling 82 game regular season schedule.

Warriors head coach Steve Kerr played for Popovich in 1999-2001 and 2002-2003 so he is familiar with his style. Look out for the Dubs in the regular season and playoffs because they will have a definite chip on their shoulder from a disappointing end to a remarkable 2015-2016 season.