Women’s soccer team off to a rocky start 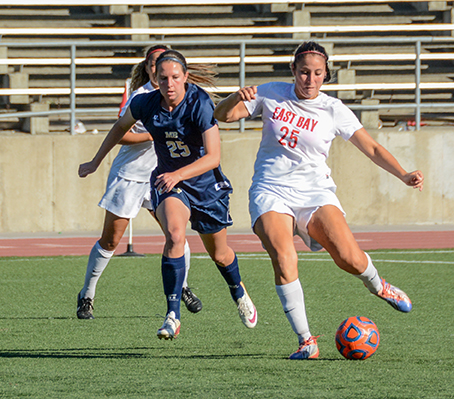 First up on Friday, Sept. 16 was California State Los Angeles, which has been a powerhouse in women’s soccer the past few years, especially in 2014, when they went 16-2-3 and made it to the second round of NCAA Division II tournament.

The Pioneers held their own throughout the first half of the game, shutting the Golden Eagles out and keeping composure, but things changed in the second half. LA’s Marie-Lou Larose scored in the first 5 minutes of the second half, putting them up 1-0. Then in the 79th minute, LA’s Anahie Duran scored on a countered attack off a shot from the Pioneers’ Andrea Hernandez giving the Golden Eagles a 2-0 win.

East Bay had a total of four shots, but only two on goal the entire game. “We have to work on different ways to get into the attack, so we can put ourselves in better positions to score and get shots on goal,” said senior midfielder Tia Sidiku.

The Pioneers couldn’t dwell on the loss too much as they had to shift their focus to their next game on Sunday Sept. 18 against Dominguez Hills in Carson, California.

The two teams were back and forth the entire game, with both teams having 16 shots on one another, but neither team could put the ball away throughout the entire 90 minutes. East Bay’s Jasmine Corbett had a very good game for the Pioneers, making 5 saves and giving the Pioneers shutout in regulation play.

The loss was East Bay’s 4th loss in a row, but the Pioneers are still very optimistic. “We make small mistakes and the opposing team makes us pay for our mistakes,” said sophomore forward Janis Gamboa. “We have to learn from the loss and focus on the little things and get better, learning from those small mistakes.”

The Pioneers have been solid defensively, but scoring has been their weakness. In order to make any noise in the CCAA, they know they have to work on putting the ball in the back of the net. “Score goals is what we need to do, plain and simple,” said senior midfielder Sialei Manueleaua. “In the final third we find ourselves frantic on the ball. We have to be more calm and take our time to realize we have more time to actually get closer to the goal and get a better shot.”

East Bay plays another strong opponent on Friday, Sept. 23 with Sonoma State, which is 4-1-1 overall and 2-0 in conference at home. “If we work hard and stay as a team we will have a great opportunity versus Sonoma and in our future games,” said Sidiku.