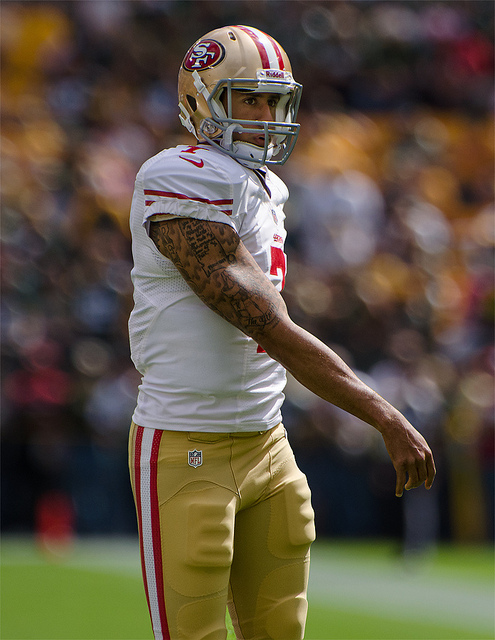 Colin Kaepernick’s national anthem protest has made him a lightning rod for criticism, but that doesn’t have him fearing his safety when the 49ers visit the San Diego Chargers for Thursday’s exhibition-season finale.

“No, because if something happened, you’d be proving my point,” Kaepernick said Tuesday in an informal talk with reporters at his locker.

To draw attention to racial injustice and social issues, Kaepernick has sat for every national anthem through three exhibition games, though his protest didn’t become known publicly until after Friday’s home loss to the Green Bay Packers.

“I knew what I was walking into,” Kaepernick added. “That’s why it’s a sacrifice.”

Kaepernick’s safety, and that of his 49ers teammates, will be handled not only through the Chargers’ stadium personnel but also the 49ers’ own security detail that typically travels and takes a proactive approach in such matters. A 49ers spokesman declined to detail any such plans.

The national anthem will be part of the telecast on the local broadcast (KPIX, channel 5), said sports director Dennis O’Donnell.

Coach Chip Kelly said Kaepernick indeed will play Thursday, and that presumably will be in a starting role. Blaine Gabbert, the 49ers starter the first three exhibitions, will not play.

“We’ve got a good understanding of where Blaine is,” said Kelly, noting that Kaepernick missed the first two exhibitions with a sore arm and needs more snaps for evaluation purposes.

San Diego’s massive presence of military personnel could result in a rude welcome for Kaepernick, who’s insisted that his anthem protest and anti-flag comments are not meant to offend the military.

The Chargers will celebrate their 28th annual Salute to the Military at the game. Navy officers will perform the national anthem pregame while over 240 military personnel unfurl a “U.S. Super Flag.” Also, “God Bless America” will be sung by a Navy officer after a halftime ceremony honoring Vietnam War veterans and wounded warriors.

Kaepernick said the only articles he’s read are ones filtered to him through his family and close friends. Although he’s drawn support from many realms, he said he hasn’t directly heard from the White House, and that his phone hasn’t been overloaded by messages because few people have his number. Wide receiver Torrey Smith is expecting a barrage of taunts toward Kaepernick from the San Diego crowd.

“You’re going to get dog-cussed, and people have the right to do that,” Smith said. “Kap knows what kind of heat he’s going to take. … You’ll hear stuff and see signs.”

“If people are offended by (Kaepernick’s protest), that’s part of the problem. But people shouldn’t get physical over it.” Outside linebacker Corey Lemonier said he has friends in the military based in San Diego. Might they sound off on Kaepernick? “Yeah, but that’s what it’s about, the First Amendment,” Lemonier said. “Everyone has a right to say what they want to say.” Because this is the exhibition finale, players such as Lemonier won’t be focused on their safety as much as this being a last chance to prove their roster worth. “It’s pretty crucial for me and most guys, and I can’t be focused on (safety),” Lemonier added.

Asked if Kaepernick will require extra security on the 49ers sideline, Kelly responded: “I’m not a security guy.” –Kelly said he will wait to evaluate film from that game before announcing his regular-season starter between Gabbert and Kaepernick, whom he confirmed are his two top quarterbacks.

When it comes to Kaepernick’s roster plight, Kelly deferred to general manager Trent Baalke’s authority in making the final personnel decisions, albeit with Kelly’s input.

“The final say is Trent’s, and that’s the way it should be,” Kelly said. “But we’ve got a really cooperative relationship. We see things the same way.” Baalke has yet to comment on Kaepernick’s national anthem protest or roster standing.