Is emoji the new feminism? 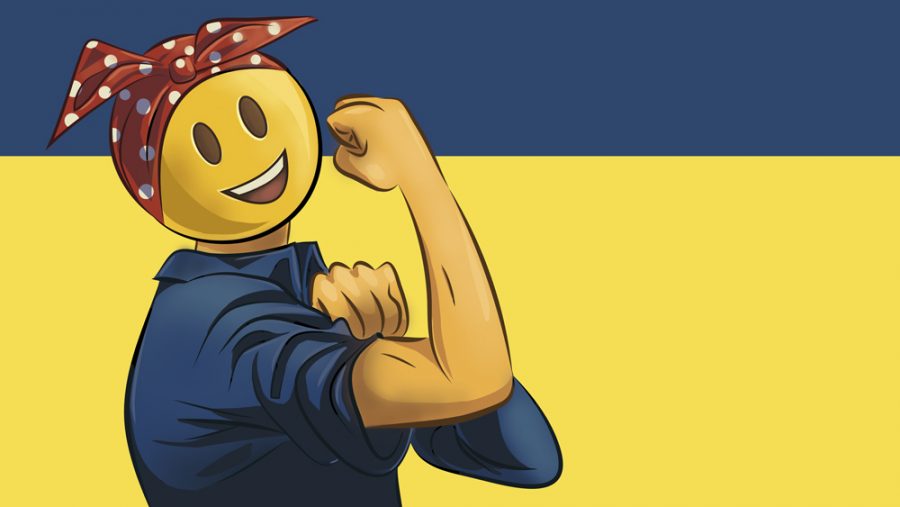 It’s been a long time since women’s career options were limited to being either a princess or a bride, but surprisingly, it wasn’t until a few weeks ago that emoji developers got the memo.

On May 10, Google employees Rachael Been, Nicole Bleuel, Agustin Fonts and Mark Davis submitted a proposal to the Unicode Consortium, a nonprofit organization based out of Mountain View that oversees the coding standards for emojis and software worldwide, for the creation of 13 new emojis that will depict women and their male counterparts in various professional positions.

A princess, a bride and a dancer: That’s basically the extent of female representation as “professionals”  in the world of emoji, a sexist and restrictive representation. While males are depicted eternally riding on horseback, launching soccer balls into goals and assuming roles as police officers or Santa Claus in cyberspace, females are frozen in time in archaic, stereotypical gender roles.

The proposal opened with a quote from Amy Butcher’s March op-ed for the New York Times, “Emoji Feminism,” a driving force behind the movement for equal representation in the world of emoji. “Where, I wanted to know, was the fierce professor working her way to tenure?” Butcher wrote. “Where was the lawyer? The accountant? The surgeon? How was there space for both a bento box and a single fried coconut shrimp, and yet women were restricted to a smattering of tired, beauty-centric roles?”

Google’s 13 new proposed emojis depict women and their male counterparts in the fields of business, healthcare, education, the tech industry, food service, music and more. If approved, Google will develop the new characters, which may or may not change throughout the process.

How were these professions chosen? According to the proposal, the group determined which occupations should be depicted by surveying data from the top sectors in the workforce, as well as trends in job growth and in the media.

Surprise, surprise! No princess or brides made the cut for the top professions held by women. It turns out that in 2016, women do a lot more than look pretty and walk down the aisle. But just when we thought 1950s gender roles were a thing of the past, technology yanked us right back into the kitchen, endlessly baking cookies and casseroles for our hard-working husbands.

Should I ever find the need to hit someone with a cake or a credit card emoji, I’m covered, but if I ever want to illustrate a new job or a promotion, I’m stuck with cocktail glass to represent a toast. During times like this, I hit up my go-to — which I think works for just about everything — the flexed bicep emoji. I reckon that it’s close enough to the famous Rosie the Riveter pose to represent some semblance of women empowerment, right?
While there are plenty of emojis depicting popular activities, from swimming to biking, weight-lifting, boating, playing basketball, surfing and horseback riding, what’s important to note is not one of the characters is female.

Yes, they are just silly little graphics that arguably don’t hold much weight against more important issues, but the subliminal messages they convey haven’t escaped without impact.

Teen girls, some of the heaviest users of emojis, are impacted the most. On March 2, Always, the feminine hygiene product producer, released the video #LikeAGirl, that highlighted the impact emoji’s have on the self-esteem of adolescent girls.“Girls love emojis but there aren’t enough emojis to say what girls do…that’s just how things are,” one of the girls in the campaign stated.

According to the video produced by Always, 72 percent of girls feel that society limits them by dictating what they should and shouldn’t do.

“They may seem small, but emojis are more than just funny faces,” stated a caption in the video by Always. “They’ve become how girls express themselves in text and online. But do emojis truly represent girls? Always asked, and it turns out 67 percent of girls feel that even emojis imply that girls are limited.”

Always asked, and Google answered. The proposal referenced the video as evidence of a growing equality movement. The video received 18 million views on Youtube and even elicited a tweet from First Lady Michelle Obama, who called for a “girl studying emoji,” according to the proposal.

Although emojis may seem insignificant, they reflect a larger struggle for gender parity.

According to the Institute for Women’s Policy Research, an organization that conducts studies and research on women’s issues and public policies, women still earn considerably less than men in almost every single occupation for which measurable data exists. For every dollar that a man made in 2015, a woman made 79 cents for doing the same work. This constitutes a gender wage gap of 21 percent.

While the equalization of the emoji doesn’t come close to the efforts of the 70-year-long women’s suffrage movement, it’s ironic that when emojis diversified to include racial options for their characters, female representation took a back seat; eerily reminiscent of when the right to vote was awarded to people of all races and ethnicities, but excluded to women.

The addition of the 13 female emojis are more than just an entertaining text tool, their presence tells a story in itself: That women are just as successful, intelligent and capable as men.

“No matter where you look, women are gaining visibility and recognition as never before,” stated the proposal. “Isn’t it time that emoji also reflect the reality that women play a key role in every walk of life and in every profession?”

Truly. The proposal is just that, for now. It hasn’t been approved yet, but it needs to be. If not for the sake of all the adolescent girls who wonder why their options are princess or bride, at least so I can spam my little sister with an emoji of a girl in cap and gown when she graduates high school in June.