Bernie Sanders will not stop the ‘Bern’ 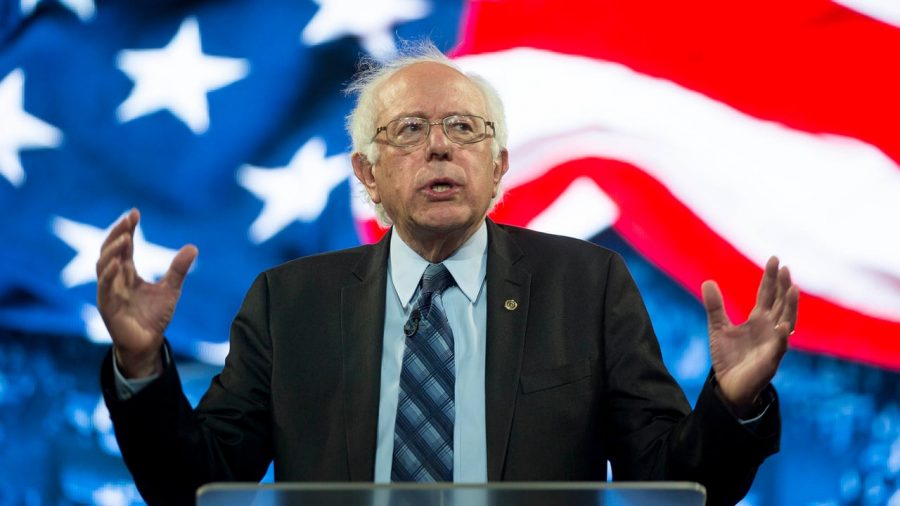 Despite urges from Hillary Clinton for Bernie Sanders to concede the Democratic Party Presidential nomination over the weekend, the 74-year-old pledged to his supporters he would not take that path.

Why would he? Sanders has won several states like Washington, Idaho and Alaska in March and even if Clinton sweeps the remaining primaries, which is unlikely since Sanders has a strong pull for the liberal western states, she still may not have enough delegate votes to mathematically eliminate Sanders. With just 10 primaries left, Sanders will need all of the votes he can get to make a comeback.

At a press conference on Sunday, Sanders said that no matter what the outcome is of the upcoming primaries, he will not drop out of the race despite the math that suggests he has no chance to win the nomination. This means that the Democratic National Convention scheduled for July in Philadelphia, “will be [a] contested contest,” according to Sanders. He will not concede his party’s nomination despite whatever the gap in votes may be, which will make Clinton’s potential nomination contested by Sanders.

The outcome is irrelevant at this point, what matters is what Sanders has done. Sanders has given hope to longshots and underdogs, and who doesn’t root for the underdog? Clinton was supposed to run away with this election and Sanders has managed to stop that with his progressive ideas and proposals, like increasing jobs and focusing on the environment, as well as issues politicians tend to stay away from, like guns and weed.

Sanders doesn’t just want to increase jobs, he wants to do it for all ages and not put the health of the environment on the line to do so. His potential jobs are intended to be environmentally friendly through means of keeping the world green, something many politicians have never even mentioned. He also doesn’t just support the legalization of marijuana, he actively wants to make it happen, another issue no politician will take a firm stand on. That, coupled with his involvement with the Civil Rights Movement since the 1960s, highlights his differences from the other vanilla candidates.

It is this progressive attitude that has led to the support of his campaign, which has received $182.2 million, roughly $74 million less than Clinton, according to both candidates’ websites. Sanders has also raised this money “grassroots” style, with more than 65 percent of his donations being $200 or less. Sanders has also denied a lot of money from big enterprises and organizations with 99.98 percent of the money raised coming from himself or donations, while more than 30 percent of the $256.2 million Clinton raised has come from big businesses and super PACs, a far cry from that of Sanders, according to both candidates’ websites.

Sanders has entrenched himself as the people’s candidate with his unwillingness to do things the way they have always been done. Sanders could have done things the Walmart way and turned his campaign into big business like Clinton or Donald Trump have, but he didn’t. He chose to keep his campaign and issues for and about the people, something that most politicians lose sight of in hopes of getting elected.

Instead of lobbying for money from big companies, Sanders has taken the more personable approach, attempting to connect with individuals rather than appeal to the masses with crazy statements. When Sanders ran for mayor of Vermont, he went door to door to hear what people wanted changed and also what they expected from their representative, according to the political memoir “Outsider in the White House,” which he co-authored with former Chief of Staff Huck Gutman, in 2015.

He has stuck true to his main platforms of rebuilding America’s infrastructure and is in the process creating environmentally friendly jobs for adults and youth. Sanders has turned this nomination on its head, it’s just too bad America hasn’t fully recognized it enough to get him the necessary votes to get elected.

Sanders has staged sit-ins and boycotts since the 1960s. He marched with Dr. Martin Luther King Jr. and he fought for civil rights and equality throughout the 60s, and continues to do so even now. This is a man who not only deserves, but should be given a chance to run our country. He knows what it was built on and for, and he learned it from the ground up, starting as a mayor in a small state to someone on the verge of their party’s presidential nomination.