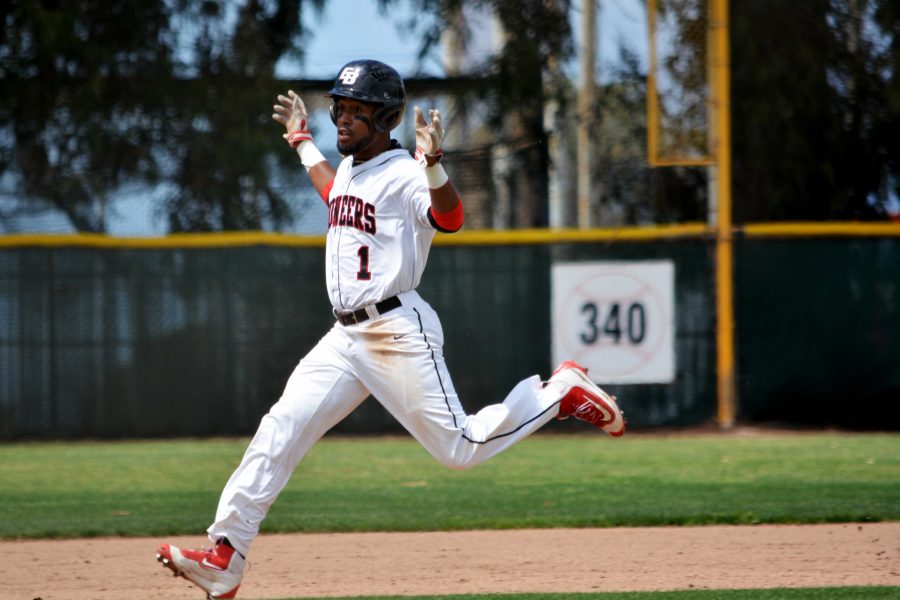 The Cal State East Bay baseball team almost had a clean sweep this weekend against Cal State San Marcos. The Pioneers won the three game series against the Cougars 2-1.

The Pioneers swept San Marcos (21-20 overall, 13-16 conference) in their doubleheader on Saturday, winning 7-3 in the first game and 8-4 in the second game.

Senior Rudy Navarro hit his first home run of the season in the first game on Saturday, when he hit an inside the park version of the long ball, which led to a score by Marcus Wise and Michael Frantz. “When I first hit, I thought it was going it foul, but I saw it had a good chance to stay fair,” said Navarro. “Once it was fair and the outfielder missed it, I knew I had to get on my horse.”

East Bay continued their hot play on Saturday with their win in the second game. Senior outfielder Myles Babitt had an outstanding hitting game in the 8-4 win going 3 for 3 with an RBI. Navarro, Chris Porter and Dakota Conners also added RBI’s in the sixth.

It looked like the Pioneers were going to sweep the Cougars, but the baseball gods had other plans for them in their 6-4 loss on Sunday afternoon in Hayward.

Sophomore Jacob Call started the game and had an excellent game throughout seven innings, only allowing one earned run on 2 hits and 4 strikeouts. “I was just pounding the strike zone, doing my best to keep San Marcos hitters on their heels,” said Call. “My catcher, Chris Porter helped me out a lot, he was calling a great game.”

The Cougars put a point on the board first in the first, leading 1-0. East Bay would then get on the board in the third to tie it up.

The Pioneers took the lead in the fifth inning when Michael Frantz singled through the left side with an RBI, leading to a score by Kris Bartlett, giving the Pioneers the 2-1 lead.

The Pioneers were doing well, not allowing the Cougars to score, securing their lead felt like a win was near.

In the bottom of the seventh Porter scored, then in the top of the eighth Troy Resch singled through the right side, allowing Marcus Wise to score and giving East Bay the 4-1 lead.

San Marcos would get their final chance to come back in the last innings and they did just that.

Right fielder Clinton Perez singled through the left side, giving Branson Bentson the advance to second and Austin Ott the advance to third, and a Tyler Place score. The Cougars were then down 2. Hudson Bilodeau then flied out to infield, giving Ott the score, making the game 3-4.

San Marcos, determined to win, wasn’t finished just there. Colin Dvorak stepped up to the plate and homered to left field, also giving Clinton Perez and Brandon Bentson a score. This gave the Cougars the lead, with a score of 6-4.

East Bay was unable to come back from the outstanding inning from San Marcos. “We felt very confident going into today with a 2-0 lead in the series,” said Babitt. “We need to work on staying focused for the entirety of the game,” Pioneers pitcher Jacob Call added.

They are currently in the 3rd spot for playoff in the CCAA North Division, and must keep winning to keep this spot. “Every game at this point is critical, we have to find a way to win these next ball games,” said Babbitt.

They will travel to Southern California to face UC San Diego (27-15 overall, 17-13 conference) in a crucial three game series.

“Our preparation for San Diego will really just be getting back to the basics,” said Navarro. “Mastering the fundamentals is key this time of year, every game is important. We just have to win.”