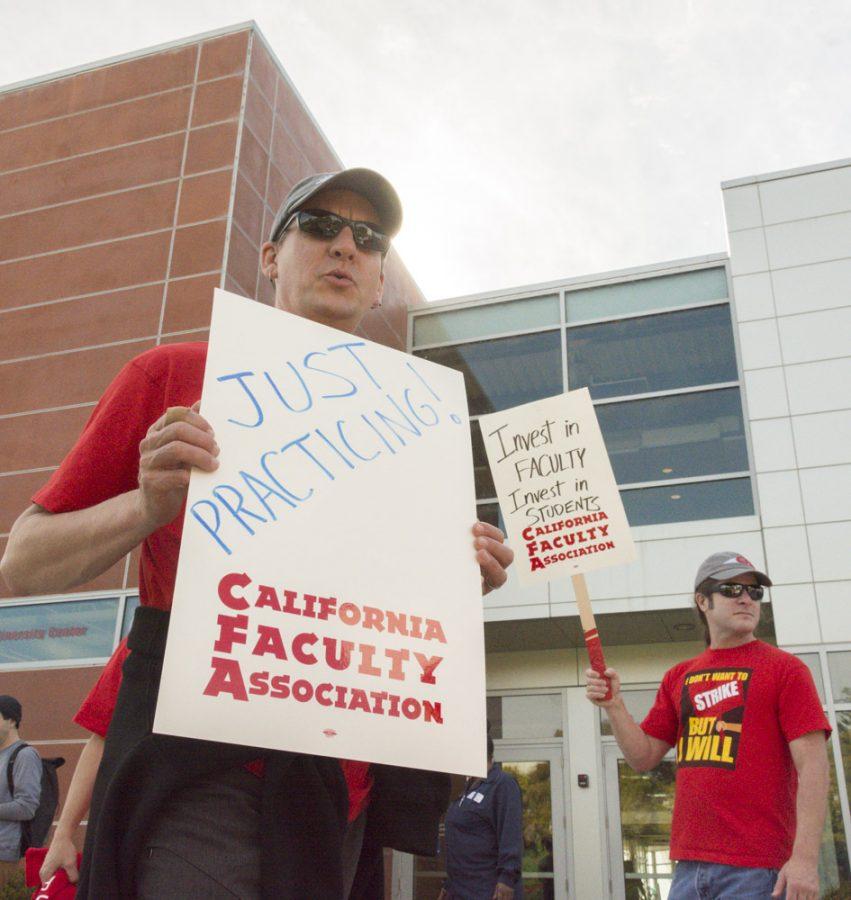 Broke college students in California aren’t the only ones living off ramen and frozen dinners; our CSU professors are also feeling the pinch.

After more than a year of grim negotiations, over 25,000 faculty across the CSU’s 23 campuses poised to strike for higher wages on April 13-15 and 18-19. So potent was the pressure from students, faculty and community members that the California State University system finally saw the light and agreed to meet the CFA’s demands through a tentative compromise on April 8.

Under the agreement, all faculty, including tenure, lecturers, coaches and staff are eligible to receive a 10.5 percent general salary increase over a three-year period, according to a CSU press release. It’s about time. The California Faculty Association and the California State University system have been involved in salary negotiations since last May when the CFA requested a 5 percent wage increase for the 2015-2016 year. The CSU only agreed to a meager two percent compromise.

If the unfavorable responses to CSU Chancellor White’s visit to East Bay on Feb. 29 were any indication of the climate on campus, there’s no doubt that the strike would’ve happened if the CSU didn’t come around, as it should’ve.

Faculty are understandably fed up with the way the California State University system has ignored their requests. Students should be prepared to drop the books, pick up the signs and join their professors at the picket line if this ever happens again, and it could.

Salary increases over the last decade have been scant and on top of that, faculty experienced a 10 percent pay cut during the recession due to furloughs, according to a third-party fact-finding discussion recommendations report.

The report concluded that the pay increase was workable and essential in order to provide students with a quality education, but the CSU argued that it didn’t have the $110 million dollars for the 5 percent general wage and 2.65 percent service salary increase that the CFA requested.

Clearly, that was a bluff. The CSU threatened that in order to accommodate the CFA’s demands, significant programs and projects  would have to be cut. But somehow they’ve been able to pull the funds together and work around it, evidenced by the compromise.

Teachers, coaches and staff are the lifeblood of a school. They are more than just instructors, they’re also mentors and role models. Their hard work and influence extends far outside of the classroom, and though you can’t put a price on the value they bring to the young workforce, the CSU system can certainly do better to recognize them for their hard work.

According to the CFA’s 2015 “Race to the Bottom” report, CSU faculty on average earn about $45,000 a year before taxes, with more than 50 percent making under $38,000 gross earnings annually.

About half the CSU faculty is considered part-time, but if all faculty were paid full-time wages, in 2014 the gross earnings would only amount to $55,000 or less, which is the same as what a truck driver makes, and almost $20,000 less than what a K-12 teacher makes, according to the report. In addition, the fact-finder report confirmed that CSU faculty are underpaid compared to other university faculty. They deserve better.

Meanwhile, tuition rates have steadily climbed hundreds of dollars during the past ten years, and last year the final budget agreement awarded the CSU $216 million of new funding, according to the CSU. While 38.5 percent of that was allocated to increase enrollment rates by approximately 12,000 students, only 24.5 percent of the budget went toward compensation. If Chancellor White, who makes $430,746 a year according to The Los Angeles Times, won’t make professors a priority, students must do it instead.

Fighting for professor’s wages equates to fighting for your education. When the faculty agreed to strike, they also had students in mind.

Students can learn a lesson from this situation far more valuable than any essay or quiz you might take in a classroom: Fight for what you believe in.

Ask yourself, what quality of an education do you want? How much do you value your educators? Forget the classic apple-for-the-teacher gesture of appreciation. The best thing students can do for their education is to stand by faculty.