I Don’t Want to Strike, But I Must 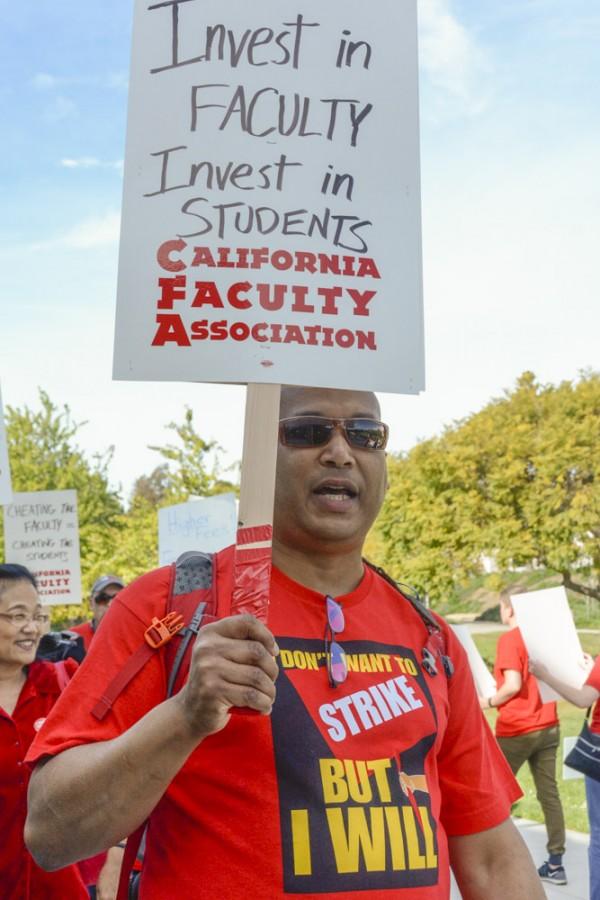 Dear Colleagues, Staff, and Students of the CSUEB Community,

You have all certainly heard by now that 26,000 California State University faculty will strike across the entire 23 campus CSU system on April 13-15 and April 18 and 19 unless CSU Chancellor Tim White agrees to a 5% pay raise for all faculty. This will be the largest strike in a state university system in the history of this country.  More strikes will certainly follow across this country, including the State University of New York (SUNY), City University of New York (CUNY), and City College of San Francisco (CCSF), and all of these systems for the same reason: systemic inequity and the betrayal of the core mission of public higher education. I believe that 2016 will be the year of the People’s University, a transformative moment in which we reclaim our state university systems as part of the public good.

In order to provide a little background, you should know that the California Faculty Association (CFA), the union representing both temporary lecturers and tenure track faculty, has been engaged in several months of contract negotiations with the CSU administration in Long Beach, California. We have asked for a modest 5% salary increase after almost a decade without a raise.  In 2008 and 2009, there were no salary increases. In 2010, we lost 10% of our pay due to furloughs. In 2011, again, no salary increases. In 2012 faculty received a less than 1% pay increase, in 2013, there were salary increases that amounted to $80 per month, and in 2014 faculty received a paltry 1.6%.

Because of the CSU Chancellor Tim White’s unwillingness to budge from his initial 2% salary increase offer, in spite of a 4% or $97 million budgetary increase in the revised California budget, the bargaining processes seems quite likely headed to a 23-campus, 26,000 faculty, 5-day strike April 13, 14, 15, 18, and 19.

I would like to offer the California State University East Bay community my explanation for why I must strike if negotiations between the faculty union (CFA) and the CSU do not move forward.

I want to make it clear to the CSUEB community that our strike is an act of love.

Both of my parents were graduates of San Francisco State University and the education that they earned in the CSU system afforded my family a stable middle-class life. My mother committed to a 35-year teaching career in San Francisco Unified School District, serving historically under-served students, leading a pregnant mothers program and summer youth employment programs.

It is because of the solid foundation that my parents received from SFSU and the example of their service to the community that I decided to commit my career to the CSU, the People’s University. I’ve served at CSUEB since 2000. Three of those years were as a lecturer and the remainder have been as a tenure-track and tenured full professor. However, in my 16 years of service at California State University East Bay I’ve watched in dismay as CSU executives gave themselves healthy raises, while faculty pay stagnated and student fees rose exponentially. I can no longer stand on the sidelines and acquiesce to these systemic inequalities.

I must strike because I love my students and am committed to the mission of the CSU.

I love working for the People University. For me, it is the culmination of all my training and hard work through graduate school. I believe in the CSU’s stated mission to give every student access to a world-class education. I believe that this mission is best carried out by professionals in the classroom and not inside of executive boardrooms. I know all too well the financial pressures that our students are facing. So many are holding multiple jobs in order to pay for tuition and other fee increases. There are students living in their cars on this campus and there are students facing food insecurity, walking around the campus hungry with little more than a couple of dollars in their pockets. Every single budget crisis that we have experienced in the state of California has been shouldered by faculty and students. I must ask whether the Chancellor believes in the mission of the CSU, the People’s University, or if he and the entire CSU administration are hell-bent on creating a separate privatized system with a highly stratified structure of under-paid faculty, endless tuition hikes for students, and exorbitant salaries and perks for upper management?

The current CSU corporate model is not sustainable and it undermines the mission statement and commitment of the CSU to serve a diverse student body largely composed of people of color, first generation students, and students from working class families. In 2005, only 37.5% of the CSU system’s operating expenses went to direct instruction. By 2015 that figure dropped to 34.2%. All the while, student tuition increased 283% since 2000. In 1990 Chancellor Reynolds earned $136,000 and was forced to resign after the Trustees awarded her a 43% raise from $136k to $195k. Today, Chancellor White earns $430, 736 in addition to free housing and a $1000 a month car allowance. Campus presidents who once earned $110,000 in the 1990s now earn an average salary of $320, 644 and the average salaries of managers and supervisors reaches $110, 713. Do you see a pattern here?

The facts speak for themselves. There is a clear imbalance between the instructional and administrative sides of the house throughout the CSU. Is our mission to educate and help our students advance through the American class structure, or is the CSU merely a high-level administrative jobs program? If we do not insist on systemic changes that will shift the imbalance between administrative and instructional priorities, we will continue to underserve our students, so many of whom are working two and three jobs to stay in school, suffering from emotional stress and food insecurity, and accumulating overwhelming debt. I consider every CSU student precious and worthy of our best efforts.

I must strike because of my love for my colleagues.

I am striking for our vastly underpaid lecturers and counselors and coaches who have spoken to me about being evicted and facing food insecurity and an inability to pay for their bills. I am striking for tenured faculty who have committed their lives to the CSU and whose long term of service has not been rewarded and whose salaries have long ago topped out, people who have told me that they feel that the CSU is punishing them for their continued service and sacrifice.

We know that the CSU is increasingly reliant on low-wage contingent, “adjunct,” faculty who work with little to no job security. 50% – 60% of all faculty in the CSU system are underpaid and overworked lecturers. Our lecturers, both part and full-time, earn less than elementary school teachers.  According to a CFA survey reported in the Los Angeles Times, faculty are grossly underpaid, “…95% of lecturers make less than $4,000 per month and 43% of them take home less than $2,000 a month…”

We know that salaries for tenure and tenure-track professors have not kept pace with that of our UC and community college colleagues. Incoming tenure-track professors are offered $67,000.  Tenured faculty with years of experience in the system average $85,039. This is below community college and University of California faculty salaries. According to that same Los Angeles Times article, “…72% of assistant professors and 52% of associate professors take home less than $4,000, and 88% of full professors take home less than $6,000 per month.”

In light of these systemic inequalities, so many of our faculty, lecturers, coaches, counselors, and tenured or tenure-track professors, have to find additional work in order to survive in the high-rent, high-mortgage environment of northern California. This is simply not sustainable and clearly threatens the ability of faculty to provide a quality education for their students. We have heard the Chancellor proclaim that we must continue to tighten our belts ­­–a popular refrain in boom and bust economic cycles– but we have also watched the leadership of the CSU not only fail to push for adequate funding from the state but also fatten their bank accounts at every possible opportunity. It’s easy to tell others to tighten their belts when you are earning over $400,000 and living in a state-funded mansion.

Why is it that those of us who teach in “The People’s University”— with the largest number of students of color, first-generation, and low-income university students in the country — are treated with such contempt? Why are lecturer faculty who comprise 50-60% of all faculty paid poverty wages? Why is the long-term service of tenured faculty unrewarded? By failing to invest in its faculty, CSU management is clearly demonstrating that educating people of color, the poor, first generation, and working class students is not a priority.

Please understand that the prospect of walking out in April troubles me.  I do not take a strike lightly, but I will be on the picket line every single day because I must. The time is now to fight for the People’s University.  I will stand up for my students, my colleagues, and the future of the CSU. I hope that you will join me as we fight for the People’s University.